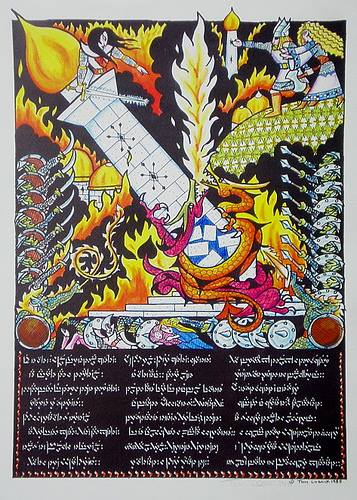 Tom Loback, a widely appreciated creator of artwork and figures for gaming and Tolkien fans, died March 5 at the age of 66.

An accomplished Elvish linguist, he incorporated characters from Tolkien’s languages into illustrations for such magazines as Beyond Bree (he produced its logo), Vinyar Tengwar, Mythlore, Parma Eldalamberon, and Little Gwaihir.

Loback also created the fantasy line of Dragontooth Miniatures, and later Thomas’ Tin Soldiers, a popular line of Civil War miniatures. He was a partner in the Aulic Council board game company and co-designer for Mohawk, a game of the French and Indian War.

Figure of a giant by Tom Loback.

For a time Loback also worked anonymously erecting sculptures along the Hudson River made with driftwood and other found objects. Eventually his identity was discovered and the New York Times profiled him in 2007.

Who was creating the sculptures had been something of a mystery, even though he was not doing it on the sly. His identity remained a secret, at least to the world beyond the edge of the river.

In July 2005, parks department cleanup crews removed the sculptures as if they were trash. Mr. Loback, 57, simply made more.

He is survived by his wife Susan.