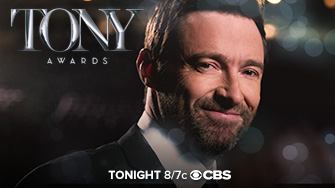 By James H. Burns: Not only will the 2014 Tony Awards (honoring Broadway plays and musicals, on CBS tonight at 8 p.m.  EST) be hosted by Wolverine, um, I mean, Hugh Jackman, but fantasy fans might be intrigued to see performances from Wicked (marking its tenth anniversary) and Aladdin, as well as a song preview from the upcoming Finding Neverland adaptation.

A 15-second video preview, aka commercial, is here.