Batman and Psychology: A Dark and Stormy Knight 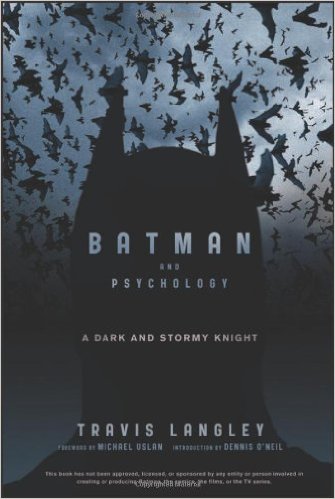 Batman is one of the most compelling and enduring characters to come from the Golden Age of Comics, and interest in his story has only increased through countless incarnations since his first appearance in Detective Comics #27 in 1939. Why does this superhero without superpowers fascinate us? What does that fascination say about us? Batman and Psychology explores these and other intriguing questions about the masked vigilante, including: Does Batman have PTSD? Why does he fight crime? Why as a vigilante? Why the mask, the bat, and the underage partner? Why are his most intimate relationships with “bad girls” he ought to lock up? And why won’t he kill that homicidal, green-haired clown? Gives you fresh insights into the complex inner world of Batman and Bruce Wayne and the life and characters of Gotham City. Explains psychological theory and concepts through the lens of one of the world’s most popular comic book characters. Written by a psychology professor and “Superherologist” (scholar of superheroes). 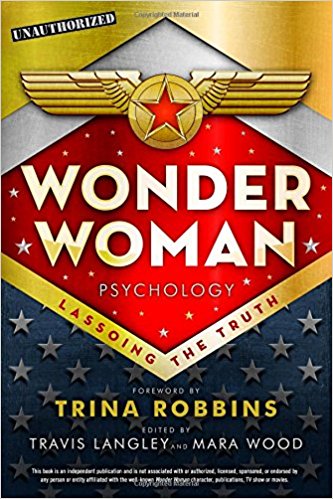 A fascinating analysis of the psychology behind Wonder Woman. For 75 years, Wonder Woman has served as an inspiration to people everywhere. Wonder Woman Psychology: Lassoing the Truth examines this powerful superhero–who was created by famous psychologist William Moulton Marston–through 20 chapters, including some very special interviews and the previously unpublished memoir of Elizabeth Holloway Marston. This collection analyzes: Marston’s important role in the history of forensic psychology. How Diana’s relationship with her mother and Amazonian sisters shapes her to become a leader and the heroine called Wonder Woman. The ways differences in culture and gender can contribute to alienation but also to personal empowerment.

What roles emotion, strengths, virtues, and culture shock play in heroic behavior. And what it truly means to be a wonder. 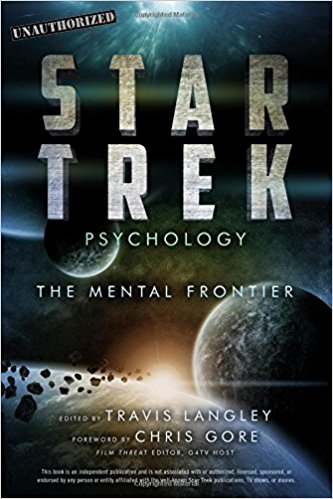 The next entry in Sterling’s Popular Culture Psychology series features 20 chapters and exclusive interviews with cast members and Rod Roddenberry. In a fun and accessible way, Star Trek Psychology delves deep into the psyches of the show’s well-known and beloved characters. The trailblazing franchise spans five TV series, 13 films, and countless novelizations. It celebrated, as no other form of entertainment had before, a world filled with space-traveling dreams and human diversity. In the process, it became one of the oldest and most popular sci-fi franchises of all time. Star Trek Psychology uses academic and scientific theories to analyze and answer such questions as Why do Trek’s aliens look so human, and how can the starship’s holodeck be used for therapy? This compilation examines alien neurobiology, discusses identity formation for shapeshifters, explores the importance of emotion for artificial intelligence, and much more.

Star Wars Psychology: The Dark Side of the Mind 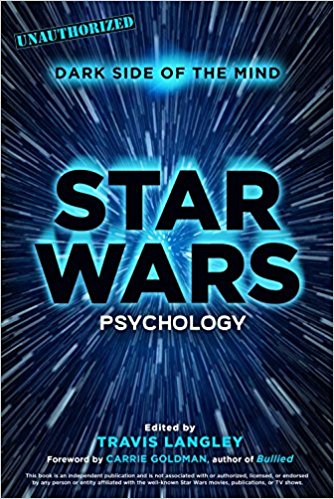 From its very first frame, the Star Wars series created a compelling universe with complex characters and engaging storytelling. This collection offers a fascinating psychological analysis of every aspect of George Lucas’s richly rendered galaxy with all its characters and stories. Expert contributors led by Travis Langley ( Batman and Psychology: A Dark and Stormy Knight; The Walking Dead Psychology: Psych of the Living Dead) examine such topics as family ties, gender, prejudice, values, villainy, and heroism itself, including a look at how psychoanalysis and archetypes directly shaped the original trilogy. They shine a light into the hidden part of the psyche and reveal the ultimate lesson of Star Wars.

Game of Thrones Psychology: The Mind Is Dark and Full of Terrors 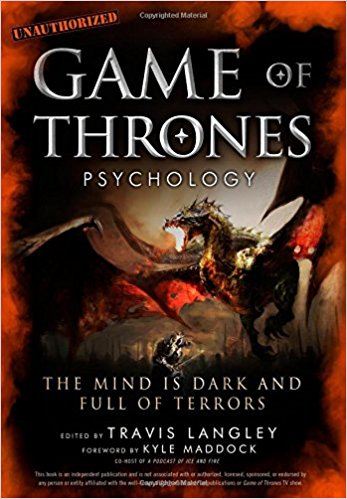 This thought-provoking anthology offers a close examination of the psychology behind the intricate narrative and compelling characters in author George R.R. Martin’s bestselling work, A Song of Ice and Fire, and the the popular HBO TV series based upon his books, Game of Thrones.

In Martin’s richly detailed world, deceit, manipulation, and greed rule the day, and almost everyone fights for power over the realm or simply over their own lives. How do love and hate, good evil, need and greed, altruism and narcissism drive the very best and very worst human behaviors? With no moral boundaries honored, the psychological games played by the series’ conniving protagonists are seemingly limitless. Game of Thrones Psychology: The Mind is Dark and Full of Terrors explores motivations, relations, personality disorders, psychopathy, trauma, and much more. What kind of person can survive the game of thrones, much less hope to win? 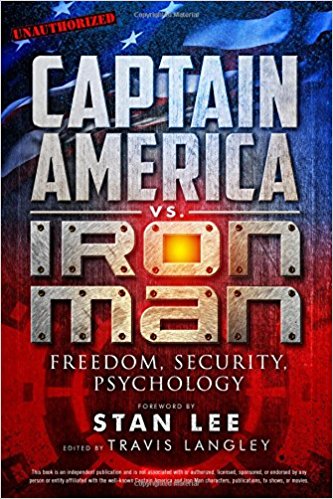 Freedom vs. security, the basic human dilemma. Can heroes really protect both? Two iconic figures, two living symbols whose choices make them superheroes and leaders, come to completely opposite conclusions.

This provocative collection, edited by acclaimed media psychology writer Travis Langley and with a foreword by the legendary Stan Lee (!), examines the complex psychological and political choices made by Captain America and Iron Man throughout their careers, culminating in Marvel’s superhero civil war which spreads far beyond the Avengers themselves. Why do Steve Rogers and Tony Stark see things so differently? What are their motivations? Is either one truly in the right? Captain America vs. Iron Man: Freedom, Security, Psychology, our latest entry in this popular psychology series. analyzes the polar sides of this debate–individual freedom vs. national security. How does trauma shape these heroic characters? What does it take to become a hero? What roles do empathy, gender, genius, morality, leadership, and teamwork play in starting conflicts and in resolving them? Fans will find thought-provoking psychological material to contemplate for hours. Do we really have to take sides?

Doctor Who Psychology: A Madman with a Box 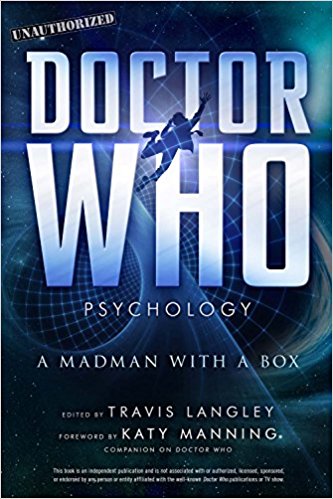 How does an immortal deal with death? What kind of person makes the best Companion? Why does the Doctor say he and Freud “got on very well”? How do the Daleks and Cybermen reflect concerns about losing our humanity? And what can looking at an ancient Time Lord teach us about real human nature? Doctor Who Psychology: A Madman with a Box explores these questions and many more. Chapters include: “Getting to the Hearts of Time Lord Personality Change” “Who’s Who: Interview with Four Doctors and a River on the Core of Personality” “Post-Time War Stress Disorder” “From Human to Machine: At What Point Do You Lose Your Soul?” Doctor Who Psychology explores the alien in us all. This fascinating in-depth collection, edited by Travis Langley, contains 19 chapters and other special features delving into the psychology behind the time-traveling Doctor in his many iterations, as well as his companions and his foes. With a foreword by Third Doctor Companion Katy Manning and interviews with actors who played Doctors new and old, Doctor Who Psychology travels through the how and why of Who. It’s all timey-wimey.

The Walking Dead Psychology: Psych of the Living Dead 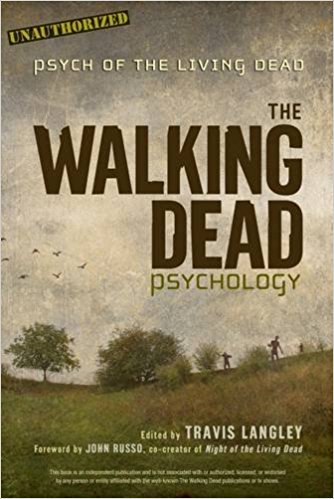 Aim for the brain! The characters of The Walking Dead live in a desolate post-apocalyptic world, filled with relentless violence and death. In reality, how would such never-ending stress and trauma affect the psyche? By understanding the psychological forces that drive the series’ action, fans can better grasp Robert Kirkman’s compelling fictional universe. Which characters suffer PTSD, which show the most hope for recovery, and which instead show posttraumatic growth? Has Rick Grimes lost his mind? What’s it like for kid like Carl growing up during the zombie apocalypse? Is the Governor a psychopath, a sociopath, or something even worse? What does that make Negan? What is the emotional cost of killing a walker or even another living person? What does Terror Management Theory tell us about what it means to fight constantly or survival? What is groupthink and how does it affect the decisions made by the people of Woodbury, Terminus, Alexandria, and Rick’s “family”? How do they find hope? In 19 chapters from a range of esteemed contributors, plus “Case Files” sidebars by renowned editor Travis Langley with a foreword by George A. Romero’s Night of the Living Dead co-creator John Russo, The Walking Dead Psychology: Psych of the Living Dead answers these and many other questions in a way sure to fascinate the millions of passionate graphic novel readers and TV viewers. What does it take to stay human when humanity has lost the world? 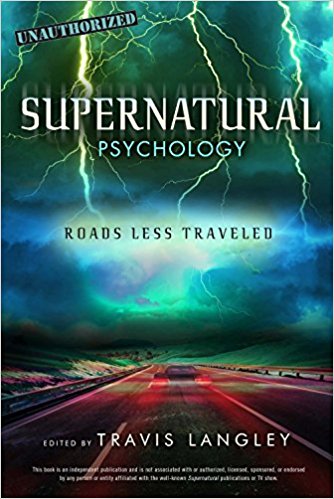 A fascinating analysis of the psychology behind the popular TV series Supernatural. From Travis Langley (Batman and Psychology; The Walking Dead Psychology; Star Trek Psychology) and Lynn S. Zubernis (Family Don’t End with Blood; Fan Phenomena: Supernatural). Following the adventures of two brothers who investigate deeply strange and paranormal mysteries in their never-ending road trip, the TV show Supernatural has many fans eager to better understand the psychology behind the series’ themes and characters. Featuring cast & crew interviews, this collection examines issues at the heart and soul of Supernatural’s heroes and foes (fans, too): The role grief and trauma play in the protagonists’ lives. The importance of music to the narrative. What motivates someone to hunt monsters and why we want to believe in magic. How angels relate to humanity and what that has to do with real intergroup conflict. How people can cope with tragedy, loss, addiction, and fear to become heroes who do the right thing. The dynamics of fandom: how fans relate to the narrative, characters, and actors, and continue to engage with series through fanfic, social media, and other practices. 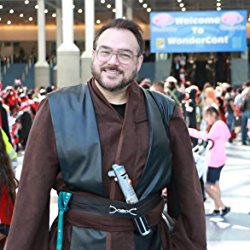 Travis Langley, Ph.D., authored the acclaimed book BATMAN AND PSYCHOLOGY: A DARK AND STORMY KNIGHT (Wiley; Turner Publishing). He is the editor and lead writer for Sterling Publishing’s Popular Culture Psychology series, including THE WALKING DEAD PSYCHOLOGY: PSYCH OF THE LIVING, WONDER WOMAN PSYCHOLOGY: LASSOING THE TRUTH, and CAPTAIN AMERICA VS. IRON MAN: FREEDOM, SECURITY, PSYCHOLOGY (with foreword by Stan Lee) along with looks at Star Wars, Star Trek, Game of Thrones, Supernatural, and Doctor Who. A psychology professor who teaches on the psychology of crime, mental illness, social behavior, and media at Henderson State University, he received his degrees from Hendrix College and Tulane University. Travis has also been a child abuse investigator, courtroom expert, and undefeated champion on the “Wheel of Fortune” game show. He appears as an expert interviewee in documentaries such as “Necessary Evil: Super-Villains of DC Comics,” “Superheroes Decoded,” and “Batman and Bill.” “Legends of the Knight” features a segment on how he uses fictional characters to teach real psychology. The New York Times (front page), CNN, MTV, and many other news outlets have covered his work. Over 100,000 follow him on Twitter, where he ranks among the ten most popular psychologists as @Superherologist.