A little over two days remain on the Nate D. Sanders auction of the Bradbury estate.

Everyone seems to find something appealing in the catalog, and not what one might expect. There have been three bids on a brick from the home of Edgar Allan Poe that Bradbury owned, the latest for $1,183.

At this hour the bidding on Ray Bradbury’s Retro Hugo is up to $7,321.

Yet there have been no bids on the plaque given Bradbury when he received his star on the Hollywood Walk of Fame. (Of course, that may be because they want $15,000 for it.)

The Guardian’s Alison Flood wrote an entire article about George Bernard Shaw’s spade, once owned by the man Bradbury called “the greatest playwright of our century.”

Bradbury, a lifelong fan of Shaw’s, was given the spade as a Christmas present. Shaw had used the tool to plant a mulberry tree on his 80th birthday, in 1936. In the lengthy, unpublished poem, titled GBS and the Spade, Bradbury wrote of how, holding it, he could feel the Nobel laureate’s influence:

I hold the dear spade in my hands,
Its vibrant lightnings strike and move along my arms,
The ghost of Shaw climbs up through me
I feel a fiery brambling of chin
I feel my spine
Stand straight as if a lightning bolt had struck
His old voice whispers in my ear, dear boy
Find Troy, go on, dig deep, find Troy, find Troy! 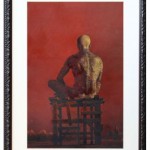 A sterling silver tray Bradbury was given when he was GoH of the 1986 Worldcon currently has a top bid of $500.

And the item I’d be most interested in owning, the Dean Ellis painting published as the cover of The Illustrated Man, has attracted 13 bids. At the moment it’s going for $27,583.