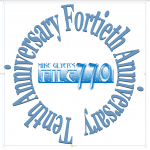 By John Hertz:  In our calendar – there are others – the first month, January, is named after the Latin word for a door (ianua), since it is the door of the year.  Its birthstone is the garnet, symbol of constancy.

The name File 770 is a joke, like many things around here.  If you don’t know it, you can look in the “About” section.

Those of us in or familiar with the United States know Our Gracious Host deserves a 10/40 anniversary if anyone does.  He might prefer we not associate this numeration with motor oil, but consideration may show his merit in reducing friction of moving parts, which would waste useful power by converting kinetic energy to heat, and by wear lead to lower efficiency and degradation.

I’ve contributed in one way or another to File 770 for a while.  You have too – even if you haven’t been sending in much.  Those also serve who only sit and read.

However, File 770 is a newszine, so do send the news.  In fandom (as a teacher of mine used to say in another context) the difference is the participation.  Over the years OGH has grown unsurprised when people evidently think “Oh, Glyer must already have heard” and no one tells him.

I asked him if there was anything in particular he hoped from me for this occasion.  He kindly suggested I think whether there was any poetry, Chinese or otherwise, I could comment on.

“Otherwise” is usually good for me.

I was going to quote “Pied Beauty”. What could be more fannish than glory in all things counter, original, spare, strange; whatever is fickle, freckled (who knows how)?

In my college days, which partly by my own doing were counter, original, spare, strange, I began with credit from Advanced Placement exams, so in my first year I took fourth-year English.

It was Antioch – not the one on the Orontes, nor on the Sacramento; nor had we a Crusader or a Killer Rabbit – and I should have realized that the teacher might be counter, original, spare, strange, or that we might waste useful power by converting kinetic energy to heat, and by wear lead to lower efficiency and degradation.  However, I was thus introduced to Gerard Manley Hopkins (1844-1889), and the end crowns all.

But Hopkins was a theist; indeed, a Christian, indeed, a Jesuit.  He wrote “Pied Beauty” the year he was ordained a priest.  Of course he wrote God in, the third word and the last, the beginning and end.  Never mind what I believe, or what OGH may believe, why should I put you to the trouble, in case you don’t, of transposing some fellow’s poetry into a different key you’re happier to sing in?

On another hand, if nothing like that may ever be, good-bye diversity.

So let’s go to China.

There the flower of January is the plum.  It starts to bloom around now, and is particularly beautiful in the snow (there isn’t any where I’m writing, or in Australia & New Zealand – I really should do my DUFF Report — but you may have plenty).  It symbolizes resilience and perseverance in the face of adversity.  It lives long; Huang-mei County in Central China is said to have a 1,600-year-old plum which is still flowering.  Here are two plums of Chinese poetry.

Both are anthologized in the Ch‘ien-chia-shih; not literally “A Thousand Poems by Masters” or “A Thousand Masters’ Poems”, it’s two hundred poems by a hundred poets, “eminently useful in teaching … the rhythms of the language and also the heart….  the most-quoted poems in the Chinese language….  for the past eight centuries, it has been the most-memorized collection of verse in China and part of every student’s education” (p. 5 of the 2003 edition I’m using, called Poems of the Masters). There’s diversity for you.

These two, in the original, are each four 5-character lines.

About No. 11, by Ho Chih-chang (659-744), the translator notes: “Although he served [as] vice-minister of the Ministry of Rites and director of the Palace Library, he was better known for his clever conversation and love of drinking.  Tu Fu [712-770, possibly the greatest Chinese poet] included him among the Eight Immortals of Wine” (p. 28; the Chinese is given too, the translator showing his work).

Some have translated it differently – there’s Chinese poetry for you – one taking it as Ch‘an Buddhism (or if you prefer, Zen) saying the poet sat until only the mountain remained.  You could.

This translator, quite familiar with such things, said only (only!) “poetry…. summarized the subtleties of the Chinese vision of reality….  in the palace, in the street, in every household, every inn, every monastery, in every village square” (p. 3).