”Marvel and the Apple Tree” explores the Long Island roots of the early years of the Marvel Age of comics, and some of our shared suburban experiences with the four-color universe.

Audiences at the multitude of internationally popular Marvel Comics movies might well believe that their impressive lineup of superheroes were born on some farflung battlefield, in a gamma-ray infused radiation burst or in the mythic halls of Asgard. But in truth, many of these dimension-spanning titans were born in a backyard in Hewlett Harbor and in a basement art studio near Mineola.

In ”Up on the Roof, Somewhere Closer to the Sky” Jim wonders if the cream of 1970s comics talent almost plummeted to their doom, thirty-eight years ago this weekend… Burns was the laison/line producer for the 1976 and 1977 Phil Seuling International Comic Art Conventions and he recounts a rooftop soiree at the Bicentennial event, amid the skyline of Manhattan.

Now, imagine a great portion of some of the most important talents in comics being placed precariously upon the roof of a structure about to be condemned….

The first piece is from the swanky Long Island Pulse, and the second from the fine comics news and reviews website, Comics Bulletin. 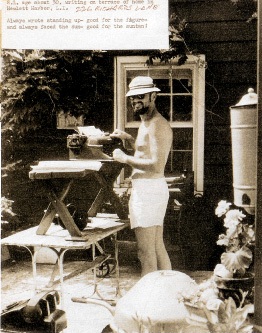 Great photo of Stan Lee writing in
his backyard in Hewlett Harbor, on the jury-rigged arrangement he worked out,
tables placed on top of one another. This is precisely how Lee wrote some of the most widely read words of fantasy in
the 1960s.