Fandom just recently became aware that prolific anthologist Vic Ghidalia died on May 28, 2013 at the age of 87.

He edited 18 sf and fantasy anthologies (some with Roger Elwood.)

Yet that was really a sideline from his day job was at ABC TV in New York, where he was employed for over 35 years. In 1974, Ghidalia worked with Lorimar Productions to do Richard Matheson’s Mother By Protest as a movie of the week for ABC television, aired under the title The Stranger Within starring Barbara Eden and George Grizzard.

James H. Burns, in a comment at the Classic Horror Forum, adds that Ghidalia was a great friend to the sf, fantasy and monster movie magazines in the 1970s when it wasn’t always easy to get a mainstream publicist to understand what a Starlog or Fantastic Films was all about. 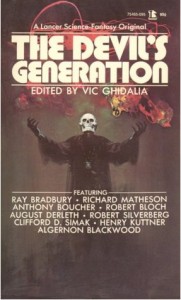