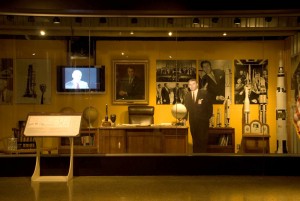 Through May the U.S. Space & Rocket Center in Huntsville is presenting “100 Years of Von Braun: His American Journey”. It includes a re-creation of Werhner Von Braun’s office with all the souvenirs, models photos and knick-knacks that used to festoon the place.

This is not an award Von Braun received in his lifetime. Rather it is the Retro Hugo for Best Related Book voted to Conquest of the Moon by Werhner von Braun, Fred Whipple, and Willy Ley in 2004. Molloy, due his connection with NASA, took responsibility for finding a proper home for the award. He got the Von Braun archive to accept it. Since then, the Hugo rocket has been exhibited several times together with other things the scientist once owned.

[Thanks to G. Patrick Molloy and Andrew Porter for the story.]