First up, here is the blog address for Johan Anglemark’s 2018 trip:  www.taff2018.com The title is Westward, Hi! TAFF 2018.  The blog allows fans who are not on Facebook to follow his exploits. Currently he is on the way to Seattle; his plane should be landing there in approximately another two hours.

I and John [Purcell] left Austin yesterday after a wee stroll through town, during which I bought physical artifacts with music for the first time in I don’t know how many years, but if there is a good record store, I say let’s support it. And Waterloo Records in Austin is that store.

We then took the 71 out of town and stopped by the Berdoll Pecan Candy store, so that we could take photos of ourselves standing by the gigantic squirrel statue they have there. 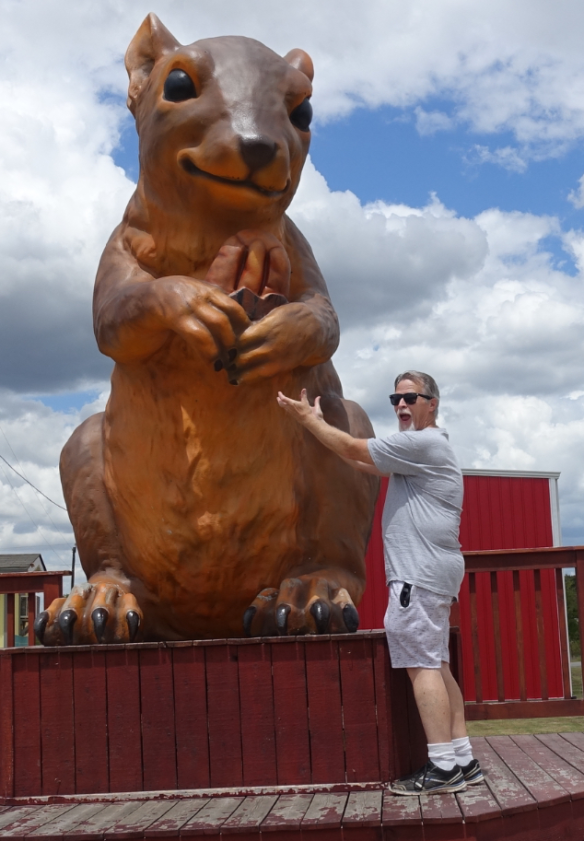 Secondly, here is what I wrote on TAFF’s Facebook page regarding the results of the ArmadilloCon 40 (Austin, TX, this past weekend) TAFF Auction and my “Busking for TAFF” musical adventure. It was supposed to be a combination concert/panel presentation, but ended up being very different from what we had originally planned. I will be writing this up for the next issue of Askew, definitely, which I would like to mail out #26 in the next week or so. But for now, here is this from the TAFF Facebook page:

Johan Anglemark and I far exceeded my expectations on what we would raise for TAFF this weekend. The TAFF portion of the Charity Auction Saturday afternoon was $146, which eclipsed the $100-125 range I expected. Then today I did an hour’s worth of “Busking for TAFF” and, with Johan’s help, we must have done something right because that raised an additional $94.85, plus items were donated for future sale for the fund. This is a total of $240.85 – which is twice as much as I had projected for ArmadilloCon 40, which had an estimated 375 attendance. Dang! Like I said in an earlier posting, the generosity of sf fans and pros this weekend had me feeling verklempt.

Thank you, ArmadilloCon fans, guests, and committee! Without you people, we could not have done this. From Johan and myself, thank you so much for supporting TAFF and helping it grow.

Words fail me. You people are the best!

5 thoughts on “Where to Follow Johan Anglemark’s TAFF Trip”