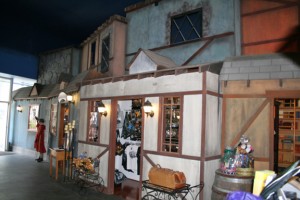 LA’s Harry Potter-themed store Whimsic Alley, sued by Warner Bros. for trademark infringement, settled with the studio and the was case dismissed on November 21. The Los Angeles Times outlined terms of the settlement:

[The] parties agreed to a settlement that is subject to a permanent injunction barring Whimsic Alley from displaying any “Harry Potter” trademarks and other “confusingly similar” marks in the shop or on its website, selling unlicensed “Potter” wares, and offering “Potter”-themed services such as day camps or parties at the Great Hall.

But the settlement allows the store to continue selling licensed “Harry Potter” merchandise — which it had long carried alongside unofficial wares that were reminiscent of clothing and other objects from the boy wizard’s universe.

In Whimsic Alley’s inventory were many unlicensed items evocative of clothing and other objects in the Harry Potter universe. Apparel models on the Whimsic Alley webpage in school uniforms and professorial gowns had a strong resemblance to leading players from the movies.

This is the second time Warner Bros. has sued the store. The 2004 suit was settled in a similar way, with store owner Stanley Goldin agreeing not to display items that featured Harry Potter trademarks — or other “confusingly similar” products — in connection with the sale of merchandise.

Warner Bros. is the most aggressive studio when it comes to trademarking its properties according to The Hollywood Reporter, with 6,304 active trademarks. Running second is Walt Disney with 5,275. No other studio or network comes close. Sony has only 221 and is known to think that zealous trademark registration is a waste. A studio can rely on the federal Lanham Act to establish its common law rights to a mark. But that does not mean Sony is necessarily less vigilant in protecting its rights. A spokesperson told THR, “A straight numerical count of active U.S. trademarks does not fully reflect the depth or number of our assets or provide a complete picture of how we protect them.”