WisCon is turning 40 and has begun a retrospective series about the con that created a home for those interested in science fiction and feminism.

WisCon: 40×40 will reminisce about one or two past conventions each week. Chris Wallish of the SF3 Communications Committee is actively looking for submissions. “Anyone who’s interested in writing about a particular WisCon can email me directly (to the comms chair email address) to enquire.” 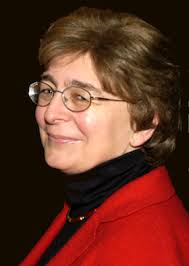 The first post in the series is by Jeanne Gomoll, who was present at the creation.

Both Jeanne Gomoll and Janice Bogstad had been impressed by an event that happened during the previous year’s Worldcon (MidAmericon 1). Susan Wood had struggled and succeeded in getting a single “Women and SF” panel scheduled, though the concom frankly didn’t expect many people to actually attend and therefore placed it in a tiny, out-of-the-way room. As it turned out, there was a rather huge number of people interested in it, and the 100 or so folks who had managed to squeeze into the room, or who had stood around outside the room trying to hear what was being said inside, stuck around in the lounge outside the panel room for several hours afterwards, talking with one another and networking. Victoria Vayne proposed A Women’s Apa during that extended conversation. And Jeanne and Jan began to talk about a convention where there would be more than a single “women and SF” panel. WisCon 1 programming got kickstarted in that lounge and many women left it intent on making new kinds of cons, publications, and networks.

Everyone on the first WisCon concom contributed program ideas. In fact, in the early years, there was no separate department that managed programming. Many panels were inspired by articles written for Janus and/or rehearsed in the group’s monthly public meetings. The group met weekly at Nick’s Bar on State Street; in addition, the group produced a monthly program at UW’s Union South, advertised in the campus press. Members volunteered to present (For example: “Your First Time…Reading SF” and “Will the Real James Tiptree, Jr. Please Stand Up!”); I designed flyers for these events and they were posted on campus kiosks. Many group members found one another through these events and eventually joined the concom. The best of those monthly presentations were turned into WisCon programs. For many years, the task of creating programming was shared by everyone on the committee. Most planning meetings devoted significant time to brainstorming and refining program ideas. Although I love the crowd-sourcing process used by WisCon nowadays, I sometimes miss the camaraderie of those early meetings when it felt as though we were inventing WisCon.