If you want to have your name added to or removed from the list, go to https://members.worldcon.fi and request a login link to edit your Public Name fields on your membership information.

@worldcon75 Hey, so I was delighted to see a member's list on the con website, but a bit worried not to see my name on it.

Slightly alarmingly, @tnielsenhayden and I aren't on that list, either. And I checked both "Nielsen Hayden" and "Hayden."

In addition, some members reported that their name was publicly posted, despite having checked the “do not publish my name” box on the Site Selection form.

If you wish to add or remove your name, you can go to https://t.co/PllYNaFcsq, request a login link and edit your Public Name.

The confusion apparently stems from the Public Name fill-in text fields in the online membership purchase form and the “Edit Personal Information” section on the Worldcon 75.

Some people believed that “Public First Name” and “Public Last Name” were intended to hold the member’s Badge Name, a provision which has been common on registration forms for past Worldcons and many other fan cons, and filled those fields in accordingly.

That is not the case. In fact, according to Worldcon 75, these fields are intended to be filled in only if the member wishes to have their name included on the public member list on Worldcon 75’s website and in the convention Programme Book.

The list on the website at http://www.worldcon.fi/ourmembers appears to be automated, and additions, changes, and deletions made by members to those Public Name fields should be reflected on the list after a short delay.

No provision has been made for members to provide a Badge Name for the convention.

Worldcon 75 members can request a new e-mail with their personalized link by going to http://members.worldcon.fi and entering the e-mail address used on their Worldcon 75 registration. 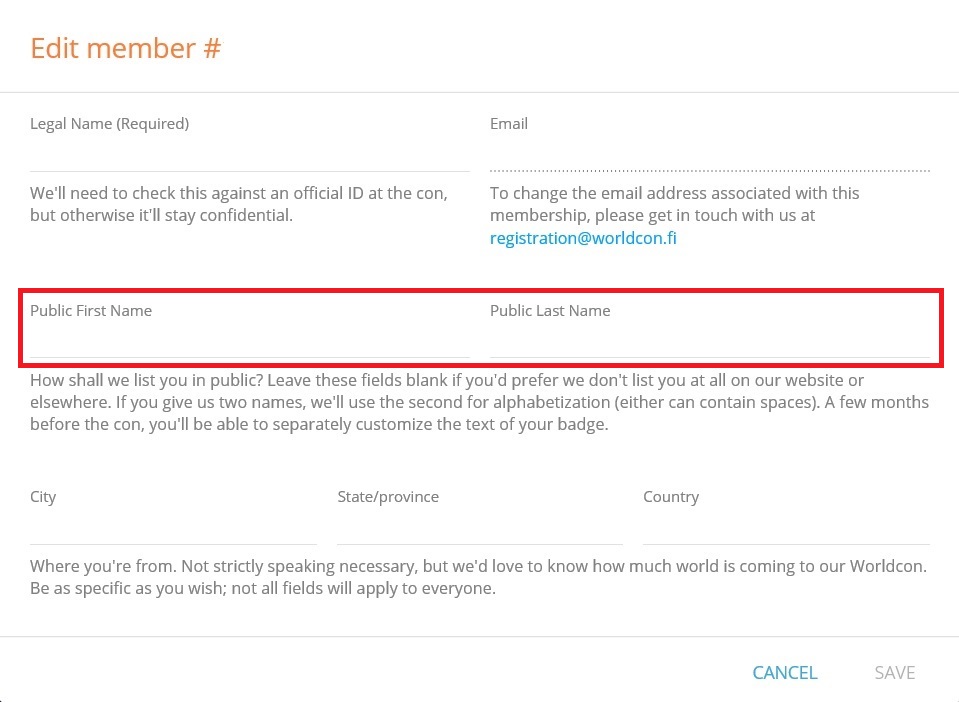