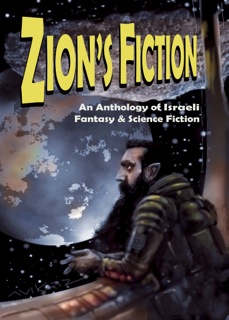 Israel is the only country in the world directly inspired by a science fiction novel — Theodor Herzl’s Altneuland, or Old-New Land. “If you will it,” he famously declared, “it is no dream!” Millions took him up on his challenge, with results no science fiction writer ever could have imagined.

Science fiction is also a facet of today’s Israeli culture – and making the rest of the world aware is the purpose of Zion’s Fiction: An Anthology of Israeli Fantasy & Science Fiction, projected to be the first of a three-volume English language collection of Israeli speculative fiction, provided enough money can be raised.

Pledges will be taken on Kickstarter beginning October 12 at 9:00 p.m. Pacific.

Zion’s Fiction has gathered an impressive set of endorsements, the most poetic being David Brin’s:

What a rate of mutation! That mystic shepherds should become a people of priests and sacrifices, then transform under hard pressure into enduring, argumentative teachers, then again into scientific pioneers… and now?  Zion’s Fiction explores the unlimited dreams of a people who have learned to stand on shifting ground. To face a future filled with danger and hope, forging into territory that can only be surveyed with the lamp of imagination on our brows.

Another by Jack Dann recalls his own groundbreaking 1974 collection Wandering Stars: an Anthology of Jewish Fantasy and Science Fiction — a book I remember reviewing when it came out.

Volume one of Zion’s Fiction will feature Israeli speculative fiction written since 1978, which Teitelbaum deems “the start of the golden age of Israeli SF.” If there are funds to produce the other two volumes, the second will showcase material published since 1948, “when hard-won independence gave rise to literary musings over alternate futures, presents and pasts.” The third will focus on material imagining different utopian versions of Jewish statehood, from the mid-19th Century and later.

Richard Lupoff hits the nail on the head when he says, “It is a land of scientific and human miracles. It makes perfect sense that Israel’s rich and tumultuous culture should produce a blossoming science fiction community.”