Here is a summary of ongoing bids for the Worldcon pieced together from the presentations at Chicon 7 and online discussions I’ve seen since then, with some Machiavellian speculation thrown in for seasoning.

There are bids for Helsinki, Orlando and Spokane. 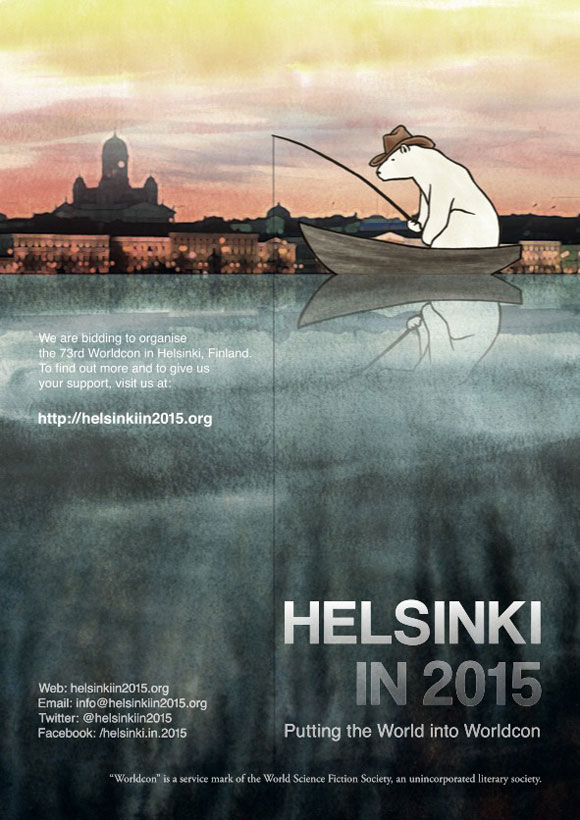 The website explains, “We’re an international crew of conrunners, with a Finnish core, and we’re hoping to build the most international Worldcon yet.”

Site selection is less than a year away, but the bid has not proposed a date for the con or identified its facilities.

In fact, fans feel obligated to begin a discussion of the new Helsinki in 2015 bid with mutual assurances that it is real. Not long ago the chair Eemeli Aro and two other top leaders were pushing Mariehamn, Finland in 2016, aka Wårldcon 2016. So far as the internet is aware, they still are.

Nevertheless, Helsinki bidders made a presentation to the Chicon 7 business meeting and ran a bid table at the recent FenCon. Helsinki has styled itself as a real bid from the start, in contrast to the Bermuda Triangle committee which took awhile to become seduced by the possibility of actually winning the 1988 Worldcon. (They made a real race of it before losing to New Orleans.)

The Mariehamn bid’s overarching advantage was that site selection voting for 2016 is to be done at Loncon 3 in the UK. There is no better timing for a European bid that wants to win, as European membership in the current year’s Worldcon will be at its peak. (Remember that The Hague defeated the LA in ’90 bid by a hefty margin at a site selection vote also held in the UK.)

Yet the serious Helsinki bid is sprinting toward an immediate up-or-down vote at a North American Worldcon against two bids for U.S. cities. Do they like their chances anyway?

If not, might this be a subtle way to party on with less risk of winning?

Or could there be an even deeper game involved? Does the committee have a contingency plan to roll over the Helsinki bid to the better year with the benefit of increased public awareness? In recent years several other bids have kept running after an initial defeat, Chicago victoriously, but KC and Columbus both losing the second time around.

The bid styles itself as a revolutionary approach to Worldcon running, committing to outreach, lowering Worldcon costs, and getting the next generation of fandom excited about Worldcon. These principles are discussed in detail in “The Orlando Manifesto”.

Spokane, Washington: The bid is being run by Alex von Thorn. Bobbie DuFault and Sally Woehrle are the prospective Worldcon co-chairs if they win. Spokane’s dates would be August 19-23.

They propose to use the Spokane Convention Center and nearby hotels, the largest being the Doubletree, Red Lion at the Park and the Red Lion River Inn.

There is a bid for Kansas City, and with caveats, Mariehamn.

Kansas City, Missouri: KC in 2016 proposes to hold the con August 17-21 at Bartle Hall and the Kansas City Convention Center. They have signed a contract with the rights of first refusal with their proposed facilities.

Mariehamn, Finland in 2016, aka Wårldcon 2016: Eemeli Aro and Johan Jönsson are co-chairs, and Jukka Halme is vice chair. The bidders made a presentation at Smofcon last December and when challenged about facilities, Eemeli Aro raised the possibility of anchoring a cruiseliner in the harbor for the duration of the con.

There are three bids in various early stages of activity, Montreal, New York, and Nippon.

Montreal, Canada: Originally announced as a 2019 bid at the 2011 Smofcon, the Montreal committee reportedly now is setting its sights on 2017, in competition with a declared Nippon bid and a possible NY bid.

The Montréal group would bring the con back to the Palais de Congrés, the 2009 Worldcon facility.

René Walling, who chaired that Wordcon, made Montreal’s bid presentation at Smofcon.

New York: Mr. Shirt and his wife, Stacey Helton McConnell, reportedly are considering making a run at hosting a Worldcon in New York for the first time since 1967.

NYC didn’t make a presentation at Chicon 7. According to Petrea Mitchell, the New York bid did not intend to begin active campaigning until 2013.

Some have expressed resistance to a Worldcon run by a pseudonym, while others are undisturbed by people using handles as their fannish identity following the example of the internet.

Nippon: The official site for the bid is www.nippon2017.org which has no information at all, and a www.nippon2017.us site “independent of and not associated with the Bid Committee, but dedicated to encourage and assist them in returning the Worldcon to Japan” which has almost as little to say. Neither site lists committee members or a proposed date.

Andrew Adams told fans at the 2011 Smofcon that the Japanese bid planned on using the same venue in Yokohama as the Nippon 2007 Worldcon. But information shared at Chicon 7 indicated the bid committee is looking at two other sites, also in the greater Tokyo area, in Chiba, and Makuhari Messe in Saitama.

The Nippon in 2017 bid is immediately handicapped by questions about the huge loss incurred by the 2007 Worldcon in Japan whose full dimensions were only revealed this month. Bid spokespersons say funding for 2017 is separate. In a move to bolster their credibility they’ve added Vince Docherty to lead the finance division. A great deal more will need to be done to persuade voters that it is economically practical to hold another Worldcon in Japan.

A New Orleans group is considering launching a bid.

Committee member Jessica Styons told File 770, “Obviously we are in the early stages of building support, gauging interest and staking a claim but we are interested in all comments, offers of support and assistance.” Rebecca Smith, chair of CONtraflow, also is working on the bid.

The one serious bid is for New Zealand.

The committee says it’s an open question where they’d hold a Worldcon. There are said to be two facilities in Auckland and one in Wellington that could support a 1500-3000 member con.