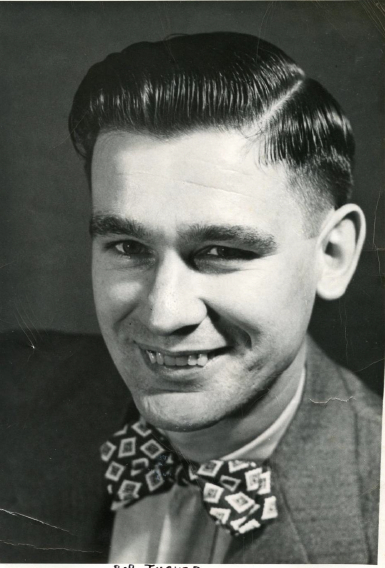 On November 23, 1914 newspapers filled their pages with coverage of World War I, neglecting the day’s real headline-maker, the birth of Arthur Wilson “Bob” Tucker – Arthur? – one of science fiction’s most influential personalities.

“Hugo Gernsback has often been called the Father of Science Fiction,” Robert Bloch wrote In the 1976 Worldcon Program Book, “but I wouldn’t count Tucker out until I see a paternity test.”

Bob founded the Society for the Prevention of Wire Staples in Scientifiction Magazines, which started fandom’s staple war, and a led to a hoax that he had died. (There were more of those; Art Rapp in Spacewarp published a calendar with September 8-15 as Tucker Death Hoax Week.) He proposed the Tucker Hotel, designed to move from one con to the next. “Save your roller skates,” he wrote. People started mailing him bricks.

His first fanzine was The Planetoid (1932); the most celebrated, Le Zombie; first appearance of his pseudonym Hoy Ping Pong, The Fantasy Fan (1933). Quite a few of Tucker’s fanzines can be accessed online. For example, 46 of the 67 paper issues of Le Zombie, and the five issues of e-Zombie are at the Midamericon site.

At the same time he was publishing those fanzines, he was writing stories – and collecting rejection slips. He finally broke through with “Interstellar Way-Station,” purchased by Frederik Pohl for Super Science Stories and published in May 1941.

However, his first published novel was a mystery, The Chinese Doll (1946). He later said “Tony Boucher paid me the highest compliment of my writing career; he wished he had written it.”

His first science fiction novel was City in the Sea. He published over 60 short stories and novels. The Lincoln Hunters was the first Tucker novel I read and remains my favorite. The Hugo-nominated Year of the Quiet Sun (1970) is his best-known work. (It lost to Ringworld.) He also sold one story that has yet to be published — “Dick and Jane go to Mars” – to Last Dangerous Visions.

Among Tucker’s legion of friends, two were constantly linked to his antics. Robert Bloch and Tucker regularly played off each other in humorous fanzine pieces. And Tucker and Rusty Hevelin were great friends who did their act at conventions. Tucker enjoyed introducing Rusty as his “Dad”, winking at the fact he’d been born in 1914 and Hevelin in 1922. Tucker would also say, “Some people wonder out loud why dad’s surname is not the same as mine. It’s a simple answer. He didn’t marry my mother.”

And the night Tucker was a victim of the events which produced the catchphrase “Dave Kyle says you can’t sit here,” missing Al Capp’s speech in the process, Hevelin was the one who kept Tucker from stalking out of the 1956 Worldcon. 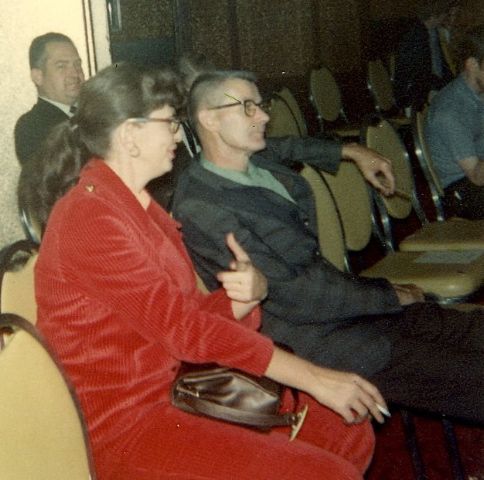 Tucker’s father was a circus man, with Ringling Bros. and with Barnum & Bailey. However, Bob lived in an orphanage from the age of 11 to 16, then ran away and rode boxcars for a few weeks til police picked him up and sent him back to his father in Bloomington, Illinois.

Bob made his living as a motion-picture projectionist and a stage electrician. Visiting Los Angeles for the 1946 World Science Fiction Convention, he dropped by the union hall to ask if there was work, and spent six months at 20th Century Fox.

He served as President of Local 193 of the International Alliance of Theatrical Stage Employes (IATSE), and retired as a projectionist in 1972.

Bob met Fern Brooks while working at the Castle Theater. She was 19 and worked for State Farm during the day and cashiered at the Castle in the evening. He filled in two weeks for each of the four projectionists, so he worked eight weeks at the Castle that summer. They were married in 1953. Both passed away in 2006, Bob a few months after Fern.

Tucker is responsible for two additions to the science fiction lexicon. He coined the term “space opera” in a 1941 issue of Le Zombie:

Westerns are called ‘horse operas,’ the morning house wife tear-jerkers are called ‘soap operas.’ For the hacky, grinding, outworn space-ship yarn, or world-saving for that  matter, we offer ‘space opera.’

Then, his sly habit of sneaking friends’ names into his sf stories gave rise to the term “Tuckerization,” the practice of giving a real person’s name to a character, place or artifact in a story.

He was also synonymous with a room party drinking tradition. The comedian Red Skelton, in a mock television advertisement, promoted a fictitious brand of gin. He said it was smooth. Tucker drank Jim Beam bourbon. That was smooth. He got rooms full of fans passing the Beam and paying it homage. On his way to Melbourne for the 1975 Worldcon he got a whole airplane going “Smooooth.”

Mike Glicksohn claimed to have goosed Tucker when Bob hesitated to get on the plane to Australia. Later, the reluctant passenger learned to love flying.

“Those of us that had known Bob for any length of time knew the story of how Bob had to be ‘convinced’ to board the airliner to travel to Australia for the World Science Fiction Convention,” recalls Roger Tener. “After that experience Bob took to the air like a natural.  My very first passenger after getting my pilot’s license was Bob Tucker. We went flying one December night over the Wichita. My only problem was that Bob kept trying to roll the window down so he could bang his hand on the side of the airplane and whistle at the girls. This was a little tough because the window didn’t roll down and we were several thousand feet off the ground.”

Tucker, a presenter at the 1982 Hugos, also was goosed by emcee Marta Randall when he left the stage, perhaps the funniest moment of the night. They would return for the 1991 Hugos: when Tucker finished presenting and started to leave the stage he covered his butt with both hands. Marta came over, gave him a big hug, and winked to the audience, “Now I know why he was kicked out of the Garden of Eden.”

Fans loved Tucker’s bawdy wit and friendliness and made him the toastmaster of countless local and regional conventions. His writing, both fan and pro, won him many awards and accolades.

So today we mark the hundredth anniversary of Tucker’s arrival on Earth, a place so many sf stories dream of leaving for high adventures. More than most, he made it fun to share that dream.

[Acknowledgment and thanks to John Hertz and Keith Stokes whose articles about Tucker for File 770 provided information and insight for this post.]

11 thoughts on “A Century of Tucker”