By John Hertz: (reprinted from Vanamonde 1264) Red Pine in Finding Them Gone (2016) visits Chinese poets of the past through their homes, graves, monuments, in a one-month pilgrimage, with photographs, across China by rail, bus, taxicab, foot.  He is a raconteur, with good taste in bourbon; he brought for libations (he indeed pours them on the ground) an 18-year-old Willett and the 2011 George T. Stagg (“the last of the Guggenheim money that made my trip possible,” p. 15).

“Red Pine” is the literary name of a man living in Port Townsend, Washington.  In legend Ch‘ih Sung = Red Pine four and a half millennia ago, ending a drought by sprinkling water from an earthen bowl, was made Lord of Rain with a dwelling on mythical K‘un-lun (= cinnabar) Mountain.

Two millennia ago the Roman poet Horace praised the Greek poet Homer, eight centuries earlier, for plunging listeners into the middle of the story as if it were already familiar (The Art of Poetry ll. 147-49; T.S. Dorsch tr., Classical Literary Criticism p. 84, 1965).  RP begins “I checked out of the Beijing Friendship Hotel at five thirty, before the sun was up.”  Catching the bullet train he three pages later is at the birthplace of Confucius, who lived after Homer, before Horace.

As with The Mountain Poems of Stonehouse (2014; a literary name; Van 1262, 1263) RP writes e.g. the name of Li Po’s earliest known poem “Visiting the Taoist Master of Taitienshan and Finding Him Gone” (Finding p. 120).  In the Wade-Giles system of transliterating Chinese, which RP mostly uses, it would be Tai-T‘ien Shan, but I believe RP means this amounts to one C word, like loudspeaker; it’s Bearing-Heaven Mountain but that’s not foremost in mind.  However he lands himself in fresh difficulties: leaving out the aspiration mark to avoid Tait‘ienshan he confuses the eye a new way: it’s worse a few lines above, where he writes Taming Temple. 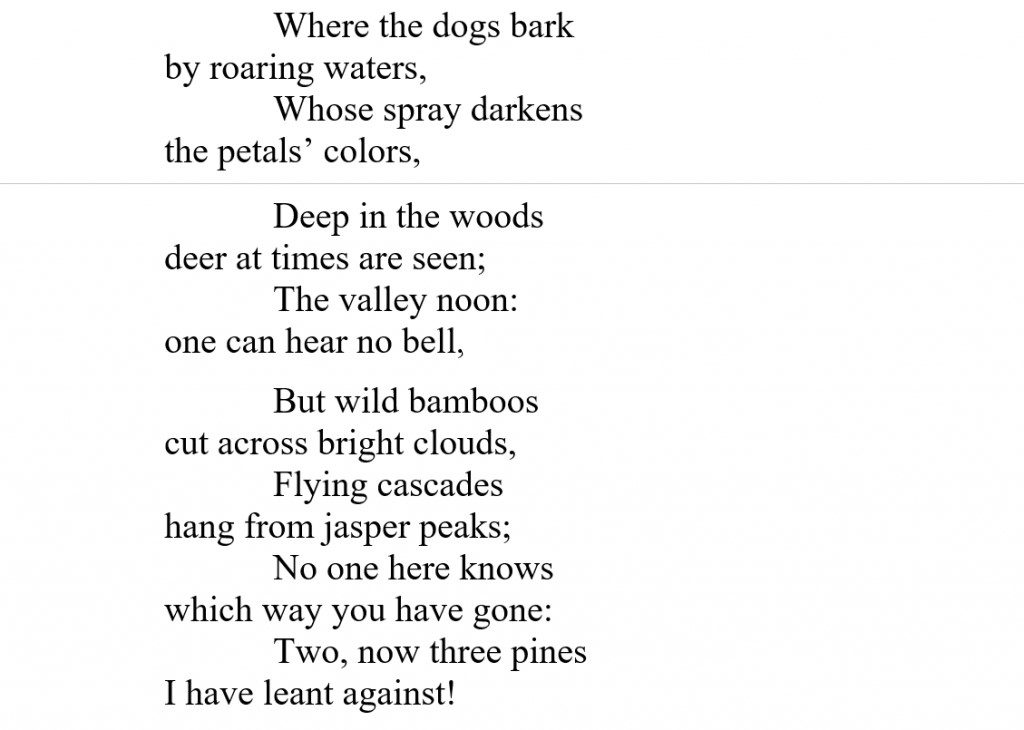 Sutton Breiding and I have been savoring Red Pine’s work.