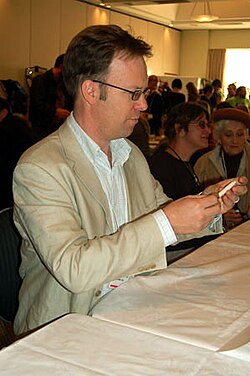 Garth Nix has been named master of ceremonies for the Aussiecon 4 Hugo Awards Ceremony. The Australian fantasy and sf novelist has sold over 5 million books worldwide and his stories have been translated into 38 languages.

I could have passed on the opportunity for a Variety-style headline but when it comes to wordplay resisting temptation is not what I do best.

The Hugo Awards are science fiction’s longest running awards.  They are given by the members of the World Science Fiction Convention for the best in fiction, art, editing, filmmaking and fan achievement. Nominees for the 2010 Hugo Awards include Neil Gaiman, John Scalzi, Peter Watts, Paul Cornell, Nancy Kress, Robert J. Sawyer and Kage Baker. For a complete list of nominations, see http://www.aussiecon4.org.au/index.php?page=66.

The ceremony will be held Sunday, September 5, in the Melbourne Convention and Exhibition Centre, and is open to all members of Aussiecon 4.  Recent Hugo Awards Masters of Ceremonies include Julie Czerneda, Wil McCarthy, Neil Gaiman and George Takei.

Garth Nix said, “It is a great honour to be Master of Ceremonies for the Hugo Award ceremony, the preeminent international awards for science fiction, and to be part of a tradition extending back more than fifty years. I am also excited to be working with a great team at Aussiecon 4, and I’m looking forward to the award ceremony, which I hope will live up to the grand heritage of the awards, while also being efficient and fun, with just the right amount of Australian flavour.”

Garth Nix was born in 1963 in Melbourne, Australia. A full-time writer since 2001, he has worked as a literary agent, marketing consultant, book editor, book publicist, book sales representative, bookseller, and as a part-time soldier in the Australian Army Reserve. Garth’s books include the award-winning fantasy novels _Sabriel_, _Lirael_ and _Abhorsen_; and the cult favourite YA SF novel _Shade’s Children_. His fantasy novels for children include _The Ragwitch_; the six books of The Seventh Tower sequence, and The Keys to the Kingdom series, recently completed with the publication of the seventh book, _Lord Sunday_, published in March 2010. More than five million copies of his books have been sold around the world. His books have appeared on the bestseller lists of _The New York Times_, _Publishers Weekly_, _The Guardian_ and _The Australian_. His work has been translated into 38 languages. He lives in a Sydney  beach suburb with his wife and two children.

For additional information: contact Laurie Mann at [email protected]  If you plan to cover Aussiecon 4, check the Press Information page at http://www.aussiecon4.org.au/index.php?page=32

Aussiecon 4 (http://www.aussiecon4.org.au/) is the 2010 World Science Fiction Convention (“Worldcon”). The first Worldcon occurred in 1939, in New York City, and Worldcons have been held annually since then except during World War II. Aussiecon 4 is the 68th Worldcon and the fourth located in Australia. The convention will be held 2-6 September 2010 at the Melbourne Convention and Exhibition Centre. Guests of Honour for Aussiecon 4 are award-winning author Kim Stanley Robinson, award-winning Melbourne artist Shaun Tan, and dedicated fan Robin Johnson.