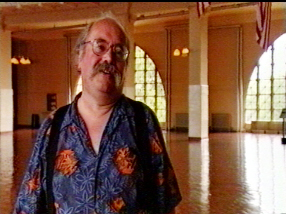 Celtic scholar, linguist and long-time member of the Mythopoeic Society, Alexei Kondratiev has died at the age of 61 of a heart attack.

This year’s Mythcon chair Jason Fisher posted the news he received from Anthony Burdge and Jessica Burke on Lingwë – Musings of a Fish:

In Alexei, Jessie and I share a mutual friend, Carole L. Gonzalez, who was his close friend. Carole wrote to us via facebook this morning and told us the news. They suspect a heart attack, but we are not sure at the moment.

Alexei Kondratiev was born in New York to a French mother and a Russian father. Raised in rural France near the site of ancient Celtic remains, he was inspired to learn the Irish language, first from books he found in libraries, then by living four years in the Aran Islands among native speakers.

For the past 25 years he taught Irish language at the Irish Arts Centre in New York as well as courses on Celtic mythology, early Celtic Christianity, and the history of Celtic traditional music. He authored The Apple Branch: A Path to Celtic Ritual. He was scholar guest of honor at the 2002 Mythcon in Boulder.

I always felt Kondratiev was a prototypical Mythopeoic Society member, someone fascinated by a linguistic and literary subject who spent his life mastering its intricacies, yet (here’s the exceptional part)  just as willing to hear about your scholarly passions as he was willing to share his own.

[Thanks to Lynn Maudlin for the story.]