By John Hertz: (reprinted from Vanamonde 1242)

Queenly women of forests unmanned,
How may we go to reach Herland?
Feat and feat and other feat.
May any helpful easement be?
Smooth each road that ye can see.

Every month from November 1909 through December 1916, Charlotte Perkins Gilman (1860-1935) wrote all thirty pages of The Forerunnner, including advertisements.  She serialized Herland there (1915), and its sequel With Her in Ourland (1916; completed in F’s final issue). 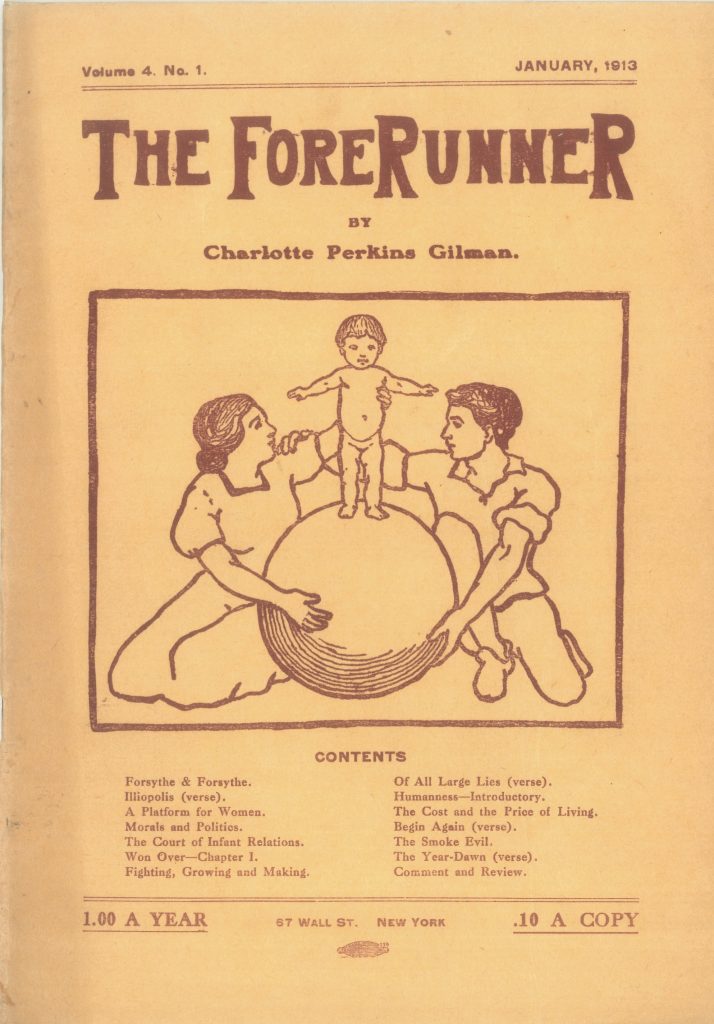 By 1909 she was already famous for Women and Economics (1898), with four printings (nine by 1920), translated into Danish, Dutch, German, Italian, and Russian.  She had speaking engagements across the United States and in Britain.  Jane Addams praised her, and she worked at Hull House; William Dean Howells said she had the best brains of any woman in America.  She played whist and chess.  She was a contributing editor to The American Fabian.

I have not found she read Bellamy’s Looking Backward (1888) – that may be in her archive, Schlesinger Library, 3 James St., Cambridge, MA 02138 – but she appeared in the Nationalist, journal of the Bellamy movement, and was an officer in the Nationalist Club of Oakland, California.

Herland was neglected until Ann J. Lane (1931-2013) got Pantheon to republish it in 1979.  On the back Joanna Russ says “It’s a lovely, funny book.  There is a wonderful flavor of Golden Age science fiction, which adds to the fun and doesn’t in the least spoil the argument, which is still fresh and very much of today.” 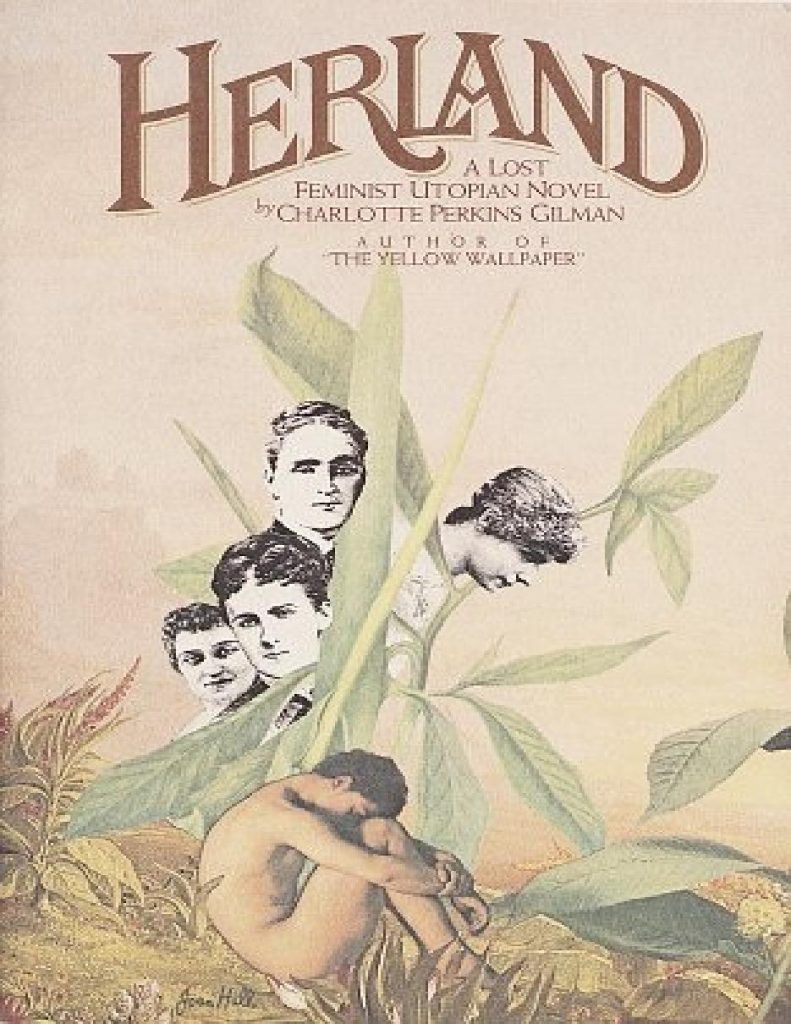 Ourland was republished by Praeger in 1997.  Mary Jo Deegan (1946-  ) in a 57-page introduction calls it “no less witty, no less sage” (p. 1), “less pessimistic about human relations”, “more courageous” (p. 3), and regrets Lane’s moan, in a 24-page introduction to Herland, that “where Herland skips and sprints, Ourland trudges” (H p. xvi, O p. 5); on the contrary, there is (O id.) “hilarious satire….  Ourland is intellectually more difficult”.

In Herland three men hear of and then find a remote country, somewhere in South America, populated only by women for two thousand years.  No other male visitors; no men hidden, nor born and expelled or worse; a woman bore a daughter parthenogenetically, it bred true, and their descendants thrive.  “We had expected a dull submissive monotony, and found a daring…. a social consciousness…. a broad sisterly affection, a fair-minded intelligence…. health and vigor … calmness of temper” (ch. 7).  The men each fall in love; marriages are invented; one man offends and must go, one couple stays, one man returns with his wife to the wide wide world as told in Ourland.

These might be science fiction; anyway, they are speculative fiction.  We might deem them thought-experiments.  With due respect to Russ and nil nisi bonum, my view is not that the fun doesn’t spoil the argument: I think the shoe is on the other foot.

Herland is neat, imaginative, warm-hearted; I’m not sorry I read Ourland, but.  Eventually the emigrant asks her husband “What is your prejudice against socialism?” to which he – narrator of both books – replies “I was obliged to exhibit my limitations…. without waiting to be careful … I produced a jumble of popular emotions…. [she] laughed merrily, both at this nondescript mass of current misconception, and at my guilty yet belligerent air….  She … looked far past me – through me” (O ch. 9); alas, so must we with the author.  Nero Wolfe in Prisoner’s Base (ch. 12; R. Stout, 1952) said “You also know when to stop.”

7 thoughts on “An Earlier Forerunner Saga”