Actress Anne Meara passed away May 23 at the age of 85.

She worked a great deal in TV – her first role was in 1954 — though rarely in sf or fantasy programs.

In the Vincent Price/Coral Browne vehicle Time Express (1979), where they were the sophisticated hosts of a train that took its passengers back in time to relive an important moment of their lives, Meara played “the Garbage Man’s wife” opposite her real-life husband and comedy partner Jerry Stiller. 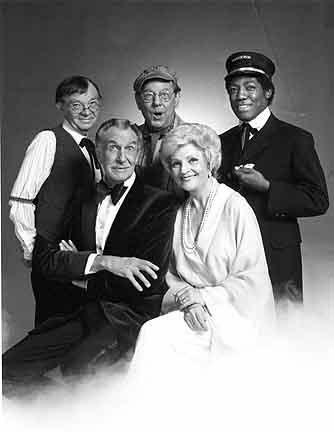 The cast of Time Express.

She appeared in 8 episodes of Alf and even wrote an episode.

In Highway To Hell (1991), a comedy film which also featured her husband and their children, Ann and Ben, Meara was cast as a waitress at Pluto’s. And she shared the screen with Ben Stiller again in Night at the Museum (2006).

She and Jerry Stiller initially gained fame as the comedy team “Stiller and Meara.” They were members of the improvisational company, the Compass Players, which later became SCTV (1976).