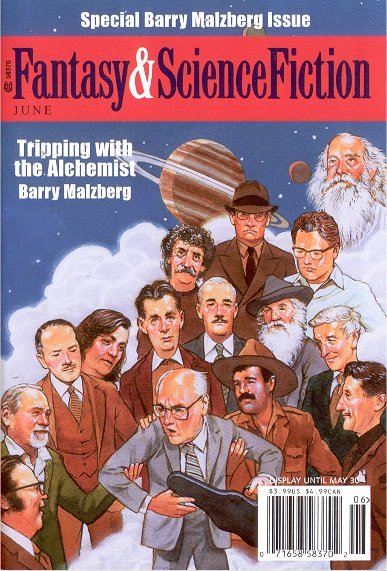 By Daniel Dern: First, a disclaimer: This isn’t quite the anecdotal story I intended to write… because it wasn’t until after finishing what would otherwise have been a clean draft that got the relevant folder from its file cabinet drawer, and discovered that my memory of one key bit was inaccurate. (To further add to the mystery, Bobbi corroborates the version I remember.) Anyhoo, what follows reflects the adjusted-for-what-seems-to-be-the-actual-fact(s).

Accumulating rejection slips is part of becoming/being a writer. I have my fair share — I’d have more if I was more on top of sending ’em out again quickly — some boilerplate, some personal.

That said, when I submitted “For Malzberg It Was They Came” to F&SF, I was ready to add another F&SF rejection to my files.

I’d written the story based on the classic/cliched advice-for-writers, “Write what you know”

o  I grew up in New Jersey (Englewood, to be specific). Before I reached driving age, including bicycling modest distances (1-3 miles) on my three-speed to libraries in my and several nearby towns to plunder their sf holdings. (And a few visits to Fred Lerner, who I must have met through fannish activity, back when he still lived in Bergan County.) Check.

o  While visiting my parents, post-college (before they moved elsewhere) (or possibly this was a decade or so later, and I was passing through staying with friends), I discovered that Barry Malzberg, one of my favorite sf authors, lived one town away. (I believe I discovered that while looking around in a new-to-me bookstore in my old home town, and chatting with a woman who turned out to be his wife.) I ended up being invited to visit Barry at his house, which I did, a few times over the following years, and also got to briefly chat with him at several ReaderCons. Check.

So, in early 2002, it wasn’t a huge leap from “I know about New Jersey, down to the street and store level in some places” and “I can describe some of Maison Malzberg” and “hey, I’m trying to write science fiction here” to “how about aliens come looking for Barry Malzberg?”

Which led to a (very) short story, “For Malzberg It Was They Came.”

My sf sales already included Analog (two, to Ben Bova), but I was still trying to crack F&SF and Asimov’s, so off it went to F&SF, in mid-May 2002.

I was prepared to add another rejection slip to my files… but when it came, I was more than slightly surprised by the reason that Gordon Van Gelder (the editor back then) had included:

Many thanks for submitting “For Malzberg It Was They Came,” but I’m going to pass on this one. Curiously enough, this story is the third Barry Malzberg pastiche I’ve seen in the last two years, [but…], I’m afraid that the story didn’t quite win me over, alas.

I’m sorry, but I just bought a story about Barry Malzberg.

which would indeed have put it in the running for Most Unexpected and Frustrating Story Rejection Letter Ever. The actual letter is more like, “Sigh.”

Ah, well. I can’t go back and redo my previous tellings.

Happily, this doesn’t change the remainder of the tale.

Undaunted, I immediately shipped it off to Asimov’s, attention Gardner Dozois.

A month after F&SF’s rejection letter, Gordon Van Gelder wrote me a followup:

If you haven’t already sold “For Malzberg It Was They Came,” could I get another look at it? I’m not promising anything, but I might be able to use it in F&SF after all.

I replied that that would be fine with me — except that I’d already sent it to Asimov’s… and wasn’t sure how to go about “unsubmitting”… perhaps Gordon could sort this out directly with Gardner (who was still editor at that point)?

And that’s what happened. Here’s part of an email message from Gordon:

So I spoke with Gardner Dozois last week about your story “For Malzberg It Was They Came” and he said that if I wanted it for F&SF, Gardner would consider it withdrawn without prejudice from ASIMOV’S.

This led to Gordon shooting for a special Malzberg issue of F&SF. (F&SF had done many similar special issues over the decades, for notables including Theodore Sturgeon, Ray Bradbury, Fritz Leiber, Stephen King, Kate Wilhelm, and, most recently, David Gerrold (list courtesy a mix of my memory and Wikipedia).)

Gordon let Barry Malzberg know, and commissioned an essay from him, “Tripping With The Alchemist” (about Barry’s time at the Scott Meredith Agency). It all came together in the May 2003 F&SF which also included:

Barry was, to say the least, very pleased by all this.

And so was I, by finally appearing in F&SF.

And, after the fact, having this reasonably unusual anecdote (which, admittedly, isn’t quite the story I’d been remembering, ah well).

One closing note, re my story, hopefully not a spoiler: While the aliens do coming looking for Malzberg, despite what some reviewers have said, at no point does the man who answers the door, nor the story’s author (yours truly), claim/acknowledge that’s who he is.

14 thoughts on “Another Rejection Letter Story, More Or Less
or
How Barry Malzberg Got His F&SF Special Issue”