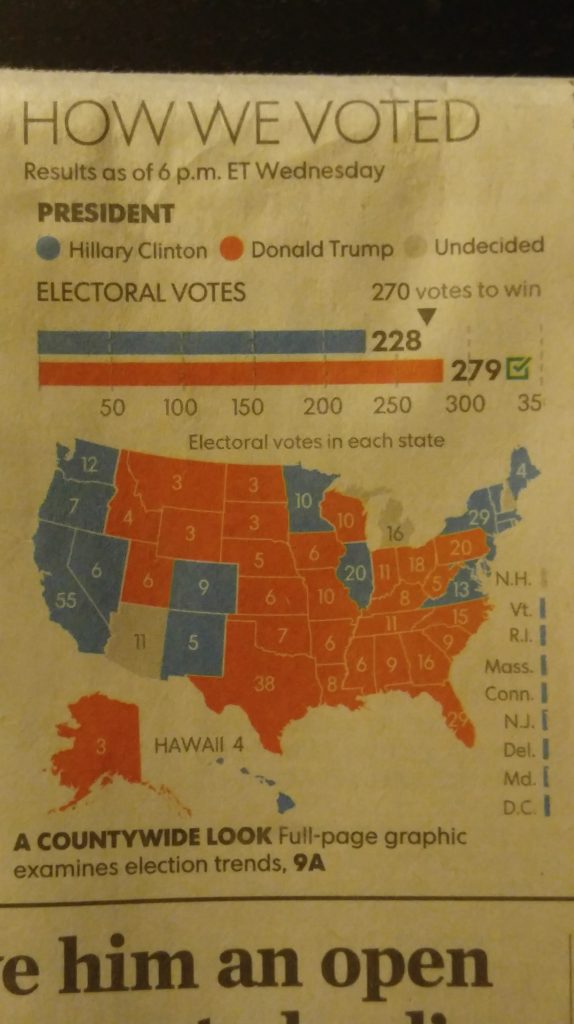 “Democracy is the worst form of government, except for all the others.” — Winston S. Churchill

Britain: “Brexit was the worst idea we ever came up with…”

A premonition: In the late afternoon of Election Day, I urgently needed to an errand. As I got into my car, a large, hulking white man hailed me from the street. He looked lost and disoriented. He approached me and asked, “Do you know where the polling station is? Some kids told me it was this way,” pointing off in the distance, “but I think I’m lost.”

I wasn’t getting a bad vibe from him and he was trying to vote, so my altruistic instincts kicked in. I tried to direct him to the rental office where the polls were being staged but he looked even more confused so I said, “Look, it would be easier if I just drove you over. Come on, get in.”

“Thanks”, he said as he squeezed into my Honda Accord and began to put on a seat belt. “My name is Michael. I’m sorry if I’m taking you out of your way.”

“I live over on Lakehurst Court.”

“Well, you were going in the wrong direction. Kinda. And you’re trying to vote, so I’m glad to help no matter who you’re voting for.”

Michael gave me a toothy grin and then said, “Well, I was a supporter of Ben Carson until he dropped out.”

My heart sank a bit. I began to pull out onto the street when I stole a glance at a book Michael was carrying; the black leather spine read The Bible KJV.

As I drove around the winding road to the rental office, a great many things crossed my mind; why was he voting for Trump? Did he know what he stood for? Was he aware of his indiscretions and how he treated the women in his life? Was he aware of the various lawsuits and the horrible business deals?

But I said nothing. He’s an adult. This was his decision, not mine.

A minute later I dropped at the polling station. “Thank you,” said Michael.

“You’re welcome. Have a nice day.”

As I looked into the rearview mirror, Michael ambled inside, his Bible in hand. Democracy in action, I say to myself. But I felt a chill that I was unable the shake for the rest of the day…

In the evening, my partner Juli, her daughter, son-in-law and I watched the returns on CNN and MSNBC for the better part of three hours. The race remained tight throughout the night. All during the evening, I spent a great deal of time trying to allay the fears of my friends posting their growing hysteria on Facebook. Since I had to be at the bookstore at 8am, I reluctantly opted to go to bed at a quarter to midnight.

Juli lay asleep next to me. My phone was turned off. The alarm clock, set to the local NPR station, would go off in two and a half hours. I was in a Schrodinger’s Cat situation; in the quiet and the dark, I had no idea who had won the election. I lay there, hoping for the best and fearing the worst.

Finally, a few minutes before the radio came on and removed all doubt; Juli awoke and turned on her phone. I saw its glow out of the corner of my eye. I raised my head. “The fucker won,” she said in a flat tone of voice. Her head went into the pillow.

Then the radio came on and National Public Radio confirmed the worst possible news; Donald J. Trump, racist, sexist, xenophobe, and the alleged perpetrator of numerous sexual assaults, was the President-Elect of the United States of America. Donald Trump, a man with no experience in governance, lawmaking, diplomatic or foreign policy skills and apparently no filter on his volatile emotions.

Frankly, just hearing the honorific “President-Elect Donald Trump” from that morning on has given me an eerie, disorienting, very disturbing sort of chill that I usually overcomes me when reading Stephen King stories, Philip K. Dick’s The Man In The High Castle or specific episodes of Fringe, the original Twilight Zone and The Outer Limits. Except this time, it was quite REAL.

Work at the bookstore that day was a rather somber affair. A good majority of my bookselling colleagues, including myself, were dressed entire in black shirts, blouses, pants or dresses, in light of the election results.

Several older white men showed up early for copies of the New York Times, USA Today, the Wall Street Journal and the Cincinnati Enquirer, were quite jovial and boasting about Trump’s surprise victory. Needless to say, they were rude when they paid for their newspapers. I was filled with disgust and loathing.

Late in the afternoon, I was manning the cash register alone when a middle-aged woman came up to the counter clutching the latest issue of Ms. Magazine, whose bright cover was exhorting readers to VOTE! Her eyes were red and puffy and it was quite evident she had been crying all day. When I am working, I try refrain for any sort of political or editorial comments with customers in order to remain impartial and avoid appearing partisan in any way.

But she appeared to be in quite a bit of distress. I abandoned protocol.

I took the magazine from her and scanned it. “Will that be all today?”

“How can you say that? My daughters are upset. My son is upset. I don’t know if I can…”

“Listen to me. There is something we can do. Tell your kids, tell your friends that we can fight. Resist. Protest. Whatever it takes.”

She wiped her face with her sleeve. “Thank you. I can’t tell you how much this means to me.” I rang the sale and handed her the magazine.

She took my hand. “Thank you.”

“You’re welcome. Just remember, you’re not alone. It makes all the difference in the world.”

The woman nodded and left smiling. I felt better myself. Still, the phrase, “Have a nice day”, did not pass my lips on November 9th.

In the days that followed, the theories on how Clinton and the Democratic Party lost the election abounded. Disaffected, white working class voters. The arrogance of the ‘liberal elites”. Hillary Clinton was the right choice of the Democratic Party at the wrong time (or vice versa). Low minority turnout. The disenfranchised minorities and voter suppression. The under estimation of the rural vote. FBI Director James Comey’s errant letter to congress. Bad polling by the “experts”. Russian hacking. Take your pick or combine; I think they were all significant factors. This maelstrom of political and social forces has given us Donald J. Trump as the 45th President of the United States.

What I found even more alarming is that in the wake of the election, racists, fascists, white supremacists and demagogues of all stripes have been emboldened to come out of the woodwork, openly commenting or aggressively acting out their feelings in public, to the detriment of people of color, immigrants, the LBGT community and just about any they judge is not quite American enough for them.

Swastikas haven painted on cars and doors. Men and women by the hundreds have been harassed or assaulted. Workplaces have been disrupted. 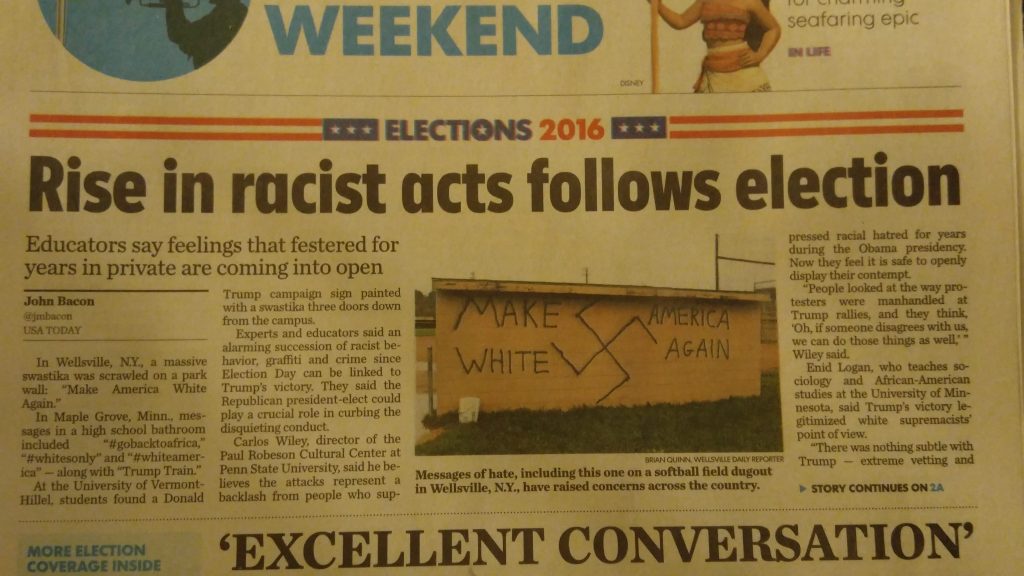 The late Robert Heinlein once wrote that he had not the slightest doubt that, on the whole, the human race would survive safely for at least several millennia. But he very worried about America surviving that long, in any shape or form. Heinlein, who lived from the Presidency of Theodore Roosevelt to the waning days of the Ronald Reagan era, probably sat up in his grave at the news of the election of Donald Trump.

So, what is the sf community to make of this rather surprising, real world development? Besides shock and despair from a good number of fans and other professionals who opposed Trump, there is also a sizeable number in fandom who actually either directly supported Trump or voted for him or third-party candidates, because the idea of Hillary Clinton becoming President to objectionable to contemplate.

Hillary Clinton, (as of this posting) had a lead of more than 1.7 million popular votes over Donald Trump. After you factor in the number of votes actually cast, a little over forty-three percent (43.1%) of Americans who were eligible to vote did not cast a ballot for president. The combined margin of victory for Trump in the key swing states of Wisconsin, Michigan, and Pennsylvania alone, which gave him the Electoral College victory, was approximately 113,000 votes.

Here’s the rub; fans across the country may be faced with a very real life scenario where they may be compelled to actively oppose a democratically elected government in a narrowly divided country.

As a member of sf fandom for the past forty years, I felt the urge, the need, to express my fears and desires here, as these dire circumstances swirl around us furiously.

We’ve all seen this movie and/or read this book before. Many, many times.

1984. The Foundation trilogy. The Moon is a Harsh Mistress. A Boy and His Dog. The Empire Strikes Back. The Handmaid’s Tale. The Matrix. The Hunger Games. Divergent. Red Rising.

There is no doubt in my mind that the next several years will be very hard on fans, writers, artists and editors. And make no mistake about it, I am very afraid; for myself, my family and friends. When I woke up on November 9th and since then, nothing seems more important in my life than opposing Donald Trump, his political agenda and the designs of his alt-fascist associates.

What do we do?

What can we do?

I can offer only one word: RESIST.

Resist giving into the hateful rhetoric.

Resist turning a blind eye to prejudice and discrimination.

Resist the urge not to speak up when you see or hear anything outrageous.

And, most importantly, resist giving into hopelessness and despair.

As Americans, we should do our best to uphold the best values our country has to offer; decency, respect, fairness, equal opportunities, to help the down trodden and those who are suffering in their daily struggles.  We can do this one person and one day at a time.

And when the time comes, we must preserve our hard-fought freedoms and fight tyranny, whenever and wherever we are needed.

See you in the streets.