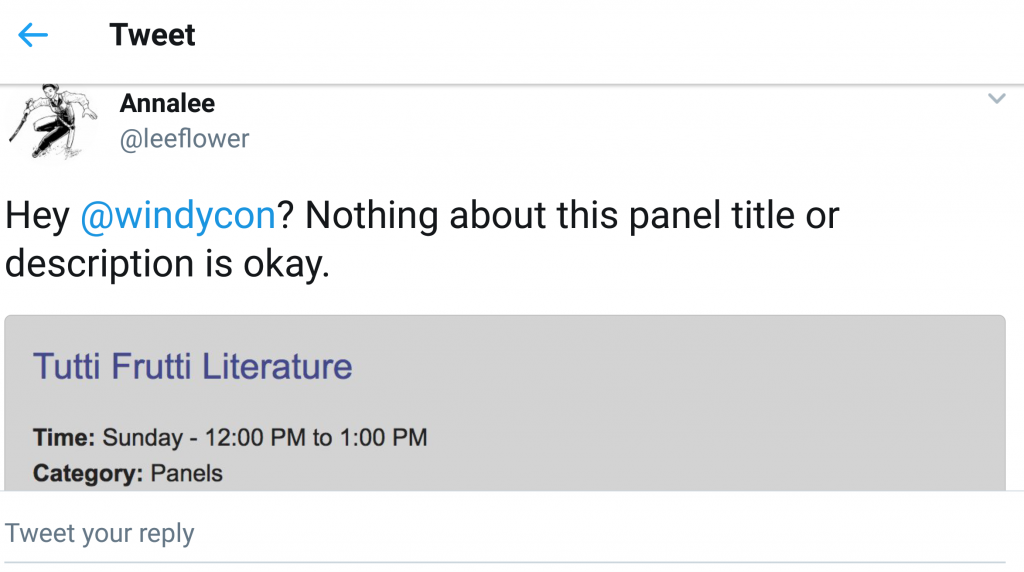 Burn The Witch and Shoot the Messenger – Windycon 44

From “Burn The Witch” by Radiohead

It’s not as though I seek out unpleasantness, it seems to find me. The latest round of is playing out this weekend at Windycon 44, in Lombard, IL.

I week ago, I emailed the programming staff of Windycon to inquire about the panels I was going to be on. I had filled out a questionnaire several months ago and had not heard back from them.

On November 4, I received several urgent emails from Louisa Feimster, the head of Programming of Windycon, apologizing because Mail Chimp had lost some emails and mine was probably among them.

Even though it was far past the deadline to include me in the program book, she sent me a link to fill out a new survey and programming application. Within 24 hours of doing so, I was inserted into several panels which had members drop out for one reason or another:

On Friday, at 6:18pm, I received a tweet from author Jim C. Hines: “Damn…@cmzhang42 – any idea what the heck’s going on with this one?” (screenshot) 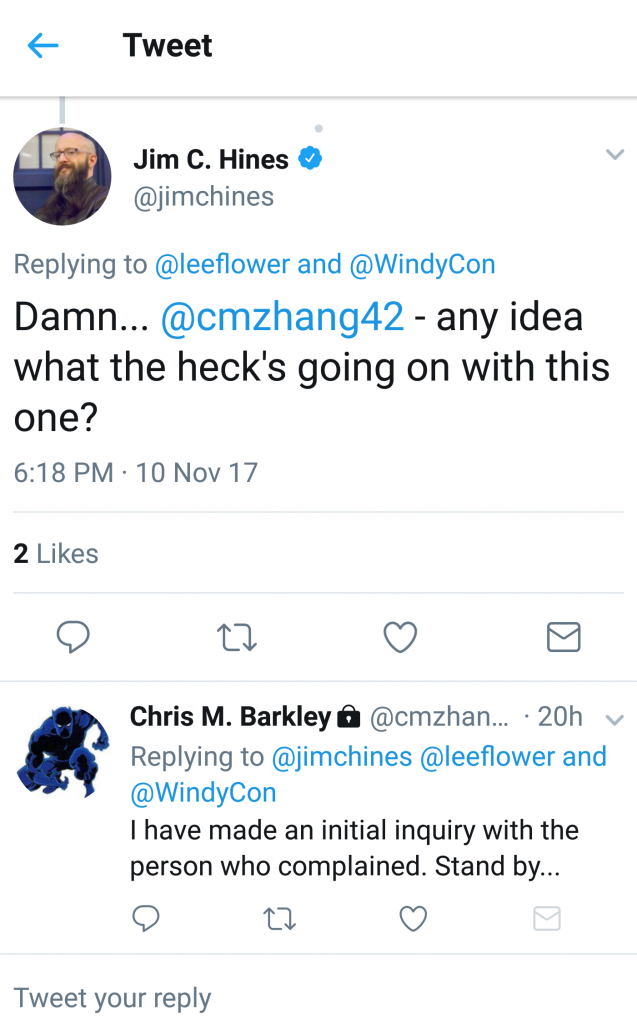 I had NO idea of what he was talking about.

So, I immediately went to my Twitter feed and found a post from @leeflower, who was complaining about the “Tutti Frutti Literature” panel:  (screenshot)

After thinking a moment, I decided to enter the fray by directly asking @leeflower, “Hello, I’m on this panel. Can you explain what your objection is, please?”

I immediately tweeted back to Jim Hines, @leeflower and @Windycon, “I have made an initial inquiry with the person who complained. Stand by…” To date, I have yet to receive a response from @leeflower.

In the meantime, the shit was hitting fan. All sorts of people piled onto to this haywagon of condemnation of the Windycon Programming staff, based solely on the objections on @leeflower. 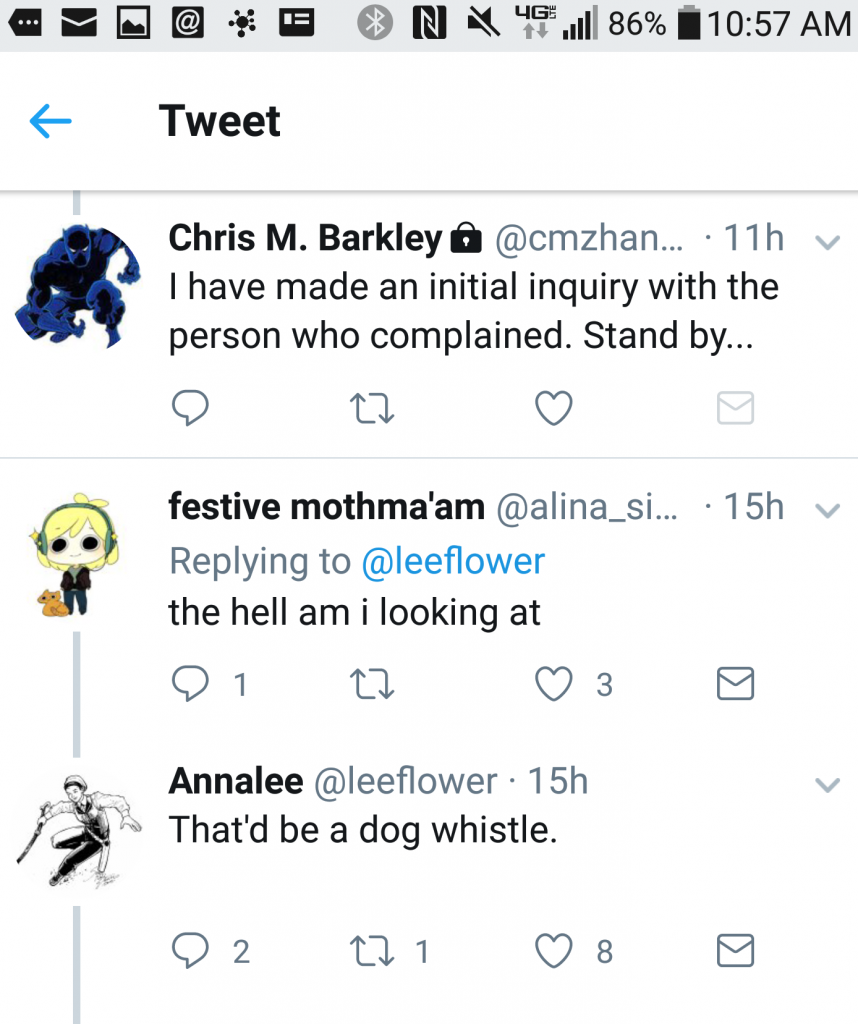 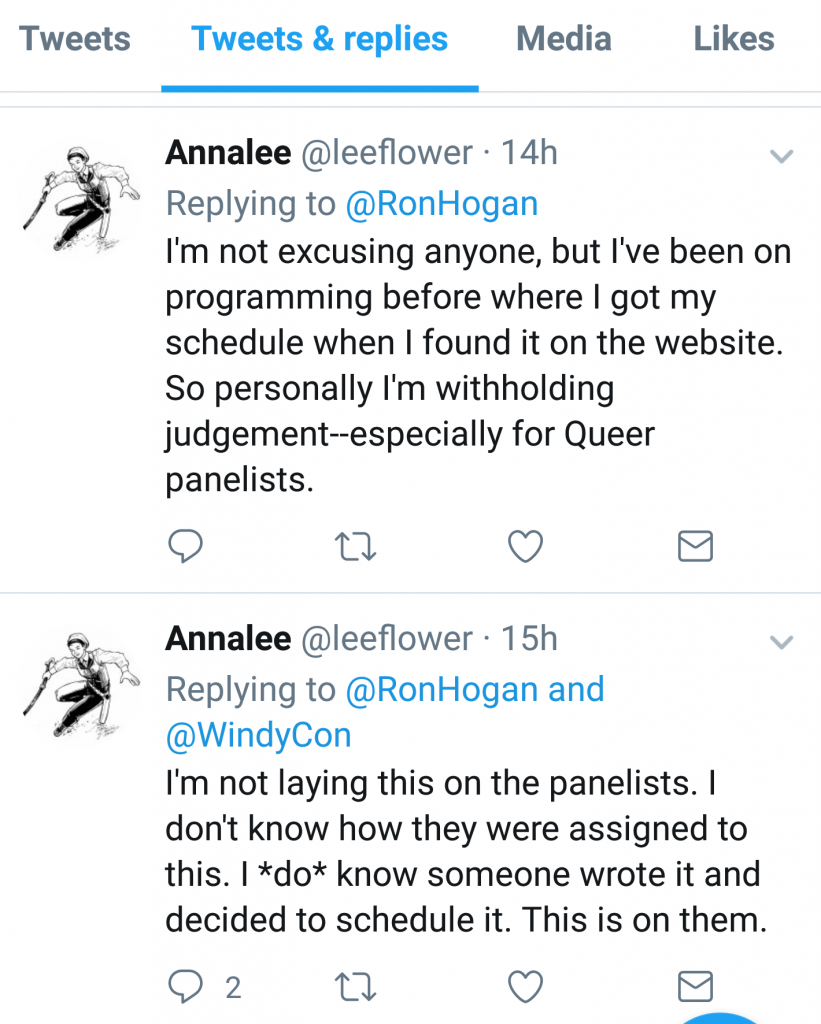 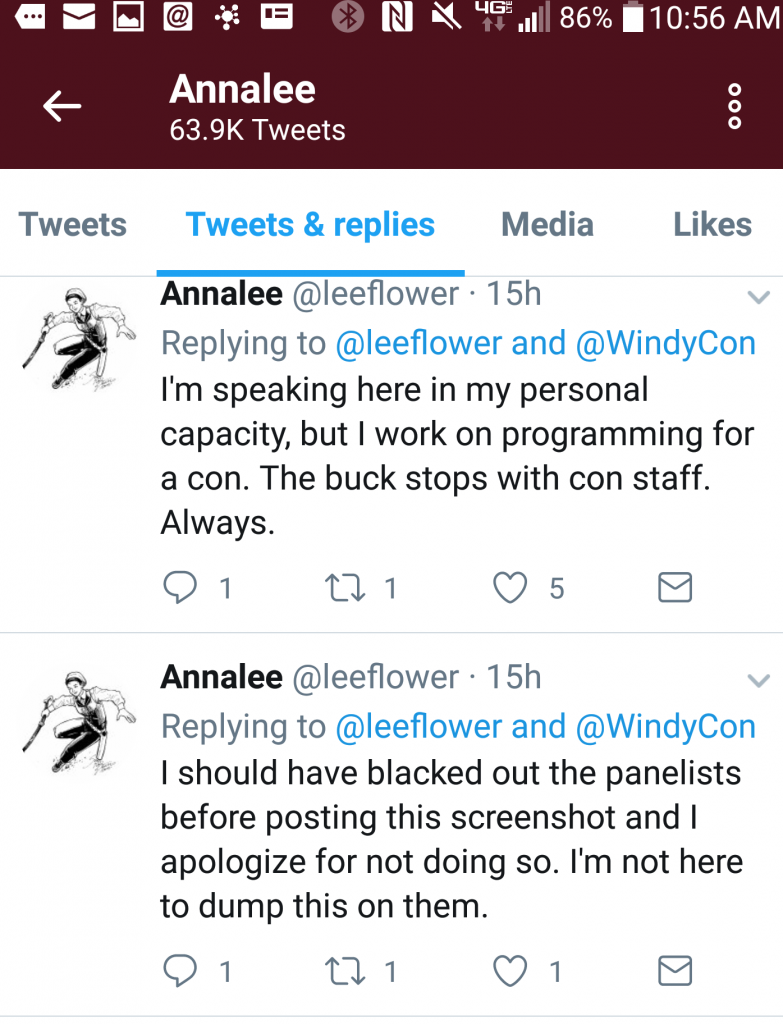 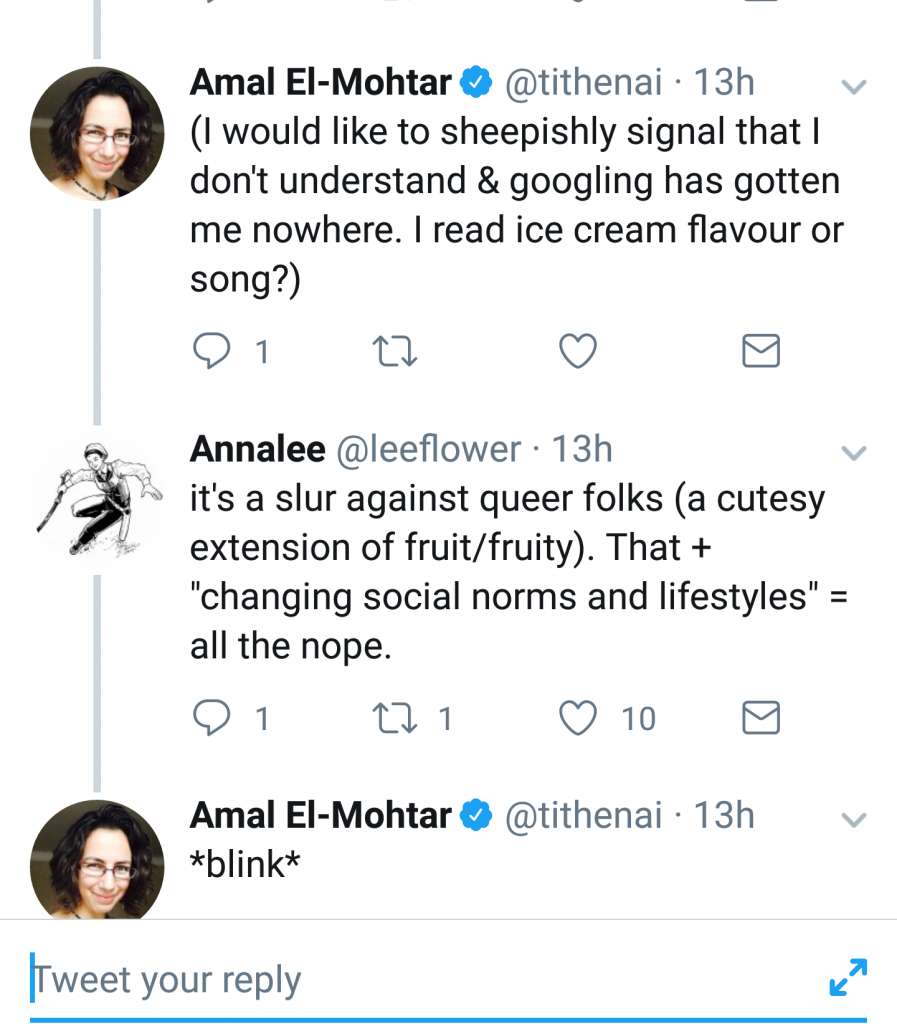 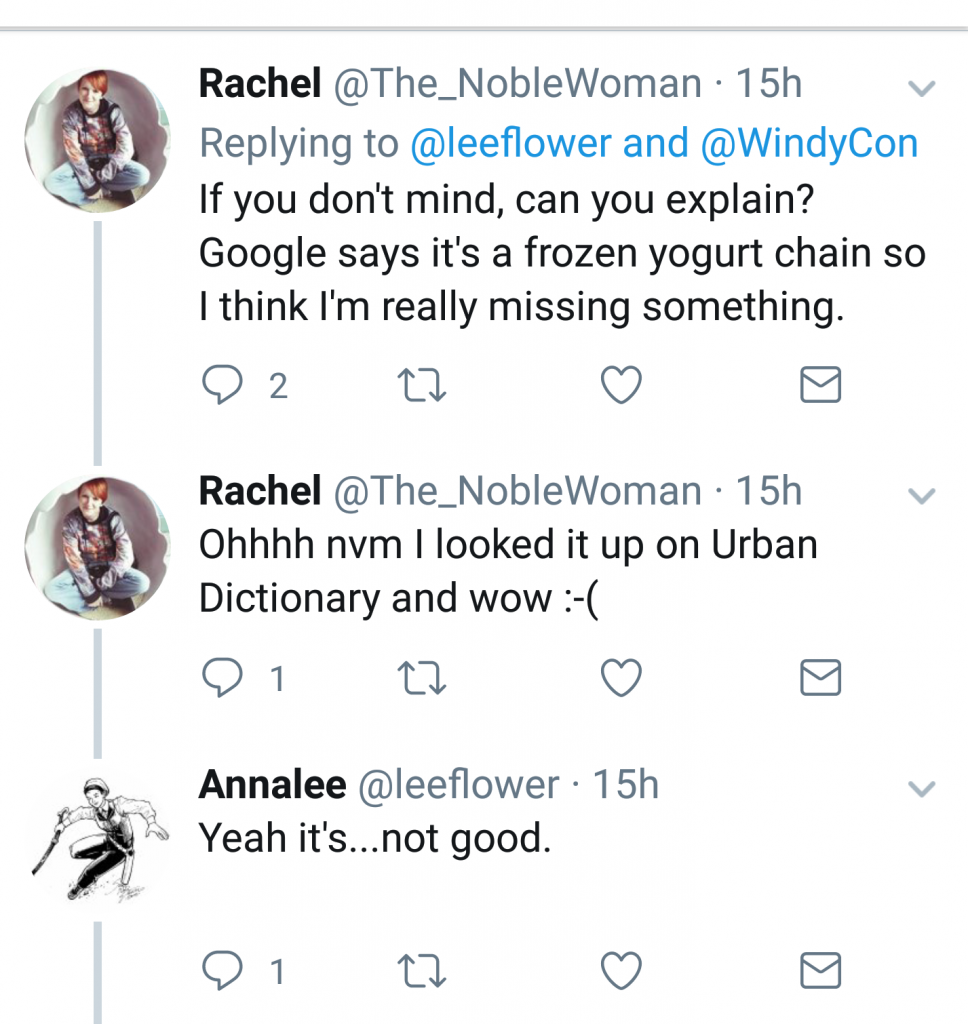 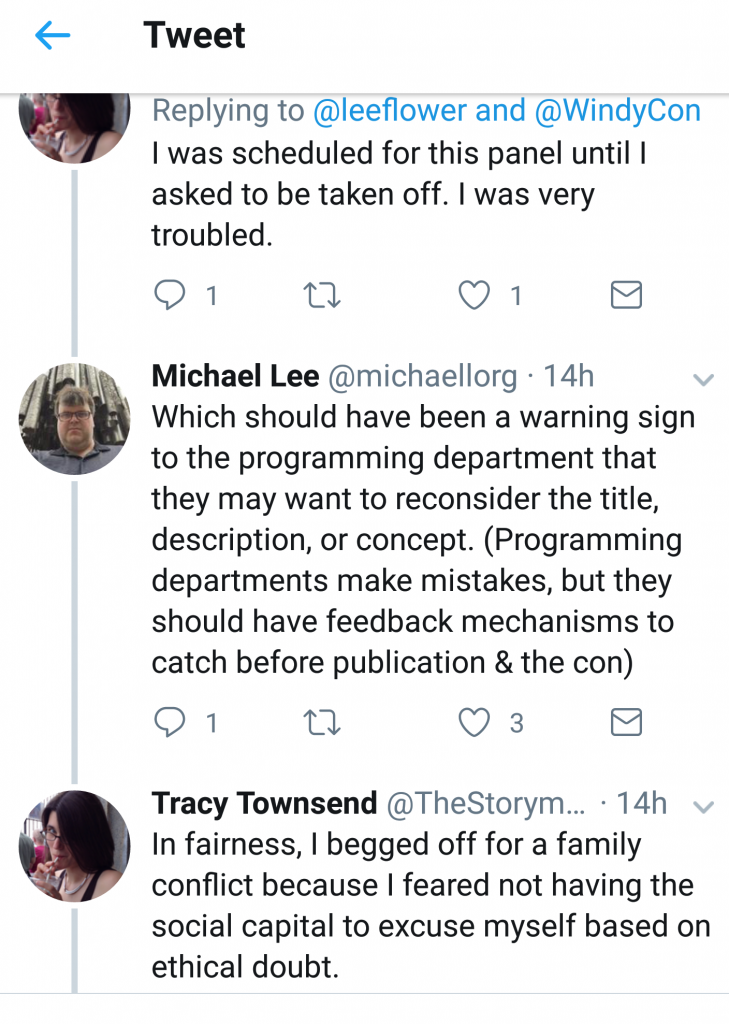 [Editor’s note: Chris supplied these screencaps without indicating their order. Looked at Twitter and attempted to reconstruct it. The inconsistent order of the internal timestamps (e.g., “14h”) is due to not all the screencaps having been made at the same time. That said, they still might not all be in order.]

No one in the Windycon administrative pipeline has responded in any way because…did I mention that Windycon was THIS weekend? And I might also add that as far as I know, NONE of the plaintiffs in this debacle are actually attending Windycon.

I happened to run into Louisa Feimster at the Saturday afternoon at the Art Show. When I outlined what was happening on Twitter in the past twenty-four hours regarding the “Tutti Frutti Literature” panel, she did a huge eyeroll and said, “You want to know what really happened? We were under a lot of pressure to come up with titles for panels and we kinda finished up in the middle of the night. Really, we didn’t mean to offend anybody, we were just tired.”

So, there was no grand conspiracy to offend the gay community. While the choice of the term “tutti frutti” may be regrettable, it was NOT done in any sense of malice, at least from my point of view.

So, in every sense of the term, THIS was a witch hunt, but no actual witches were found. We only burned ourselves. (Author’s note: I in no way condone the burning of witches, good, evil or otherwise. It’s just a metaphor, OK?)

So at the appointed time, the panelists gathered; authors Cliff Jones, Ross Martinek and the moderator, Mari Brighe. Everyone had been briefed and I was looking forward to an interesting panel. The audience was rather sparse, it numbered no more than a dozen people.

Louisa Feimster was also in attendance, to make a statement about the controversy before the panel started. Her appearance seemed to annoy Ms. Brighe who asked if she still had control of the panel.

Louisa Feimster said she that she did, but wanted to make a brief statement about the title of the panel and to outline what the intentions of the the Programming staff was when they made the decision to title this particular panel. After eloquently stating her case from what she had said to me yesterday, she indicated that the panel should begin.

Then Ms. Brighe surprised me by asking if I wanted to make my statement then. Surprising to me because usually the moderator introduces themselves before the other panelists do.

“Some of you may have heard of a dispute that started on Twitter Friday evening regarding the title and subject matter of this particular panel, ‘Tutti Fruitti Literature.’ Someone with the twittter handle @leeflower has stated that the use of this term, in the context of a discussion about our changing social norms and literature is a slur against the gay community.”

I then went onto explain, perhaps a little too forcefully, that there was no intended slur and that in the big scheme of things, we had more to worry about than a perceived slight by people who were not attending the convention and did not know the context of how the phrase was being used.

“The main point is that damage has been done to the honor and reputation of Windycon because someone was offended.

“To which I respond : BIG DEAL!

“This is the double-edged sword of the pervasive use of social media; yes, when wrongdoing is detected and a bright harsh spotlight is aimed at targets like Wells Fargo, Volkswagen, Harvey Weinstein, Kevin Spacey and Louis C.K., the world can be enlightened and warned about a situation.

“But when there is an angry, unwarranted attack, as this shows every indication to be, it does a huge disservice to the accused party and to fandom as a whole.

“To @ leeflower and other offended parties I say this; save your indignation and anger for the bigger issues and targets, like the social forces who seek to divide and demoralize us. Save it for the corporations who seek to pocket more of our tax dollars to support their businesses and interests. Save it for the judicial and police forces who oppress and kill our brothers and sisters every day. Save it for the politicians and lobbyists who are plotting and this very moment to suppress voting rights and subvert the Constitution of the United States. And most of all, save it for the current occupant of our White House, whose list of crimes and misdemeanors grow with each passing day.”

“We have plenty of enemies to worry about. Windycon is definitely NOT one of them.”

Now, I have to admit that during the latter part of my statement, I was channeling my inner Keith Olbermann, my voice filled with more than a little outrage and anger. Because, let’s face it, I was more than a little angered and outraged.

Well, I had hoped that this little outburst would rally the troops to my cause and there would be a large burst of applause as the cherry on top.

It was met with mostly silence and a few angry faces. And then came the kicker.

Ms. Brighe then took center stage and stated, in no uncertain terms, how she as a transgendered fan, was very disappointed in Louisa’s leadership with the Programming staff and with this program item in particular. She also stated that she thought that Windycon was not as progressive as they thought they were and that she still found instances of “micro-aggression and homophobia” at the convention and that as a consequence, she was relinquishing her responsibilities with this panel and was leaving.

With that she got up and left the room, leaving all us in stunned silence.

After a moment or two, Ms. Feimster picked up the moderating duties. We started with a discussion of what the hell just happened. One woman (whose name I did not catch) seemed to blame me personally for the walkout; she thought Ms. Feimster’s speech struck the right note by my speech was loud, noisy and did not take Ms. Brighe’s point of view into account.

Cliff Johns remarked that the whole incident appeared to be an unfortunate misunderstanding. I followed up by saying that this would have been a great opportunity to more understand her point of view, HAD SHE STAYED to moderate the panel.

Then Ross Marinek came to my aid by stating that he understood my point of view because he saw this attack on Windycon as an act of bullying. None of the people complaining were actually attending the convention and were triggered to make an assumption of the programming staff’s intentions without knowing the context of the offending phrase.

After this rather tense disacussion, we settled down to throwing out some examples of books, television shows and films that show how we as a society have progressed in the past 75 years.

In the aftermath of the panel, people online have proclaimed that I am a “puppy,” a bully and guilty of being homophobic myself.

The only thing I can say is that in my passion for defending the kink positive panel and Windycon, the LGBTQ community sensed a dog whistle that did not exist. If I was being overly assertive in defending a convention I dearly love and cherish, I apologize.

I may choose to do it differently next time, having learned from this experience.

However, I will always defend all of fandom, all of the time.