Don Blyly told readers today in the Friday the 13th edition of his How’s Business newsletter what he’s doing to prepare the 2716 E. 31st St. building to become the new home for Uncle Hugo’s and Uncle Edgar’s bookstores. Two years have passed since the bookstores’ old location was burned by vandals in 2020. 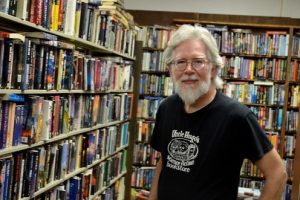 He closed on the new building a month ago. The first order of business was to clear the floor of some residual pipes.

Once the former business moved everything out, I saw that they had removed a couple of industrial sinks but left drain pipes and water pipes sticking up through the floor and that water leaks had damaged the floor under the sinks. It took calls to 3 plumbing companies, and a second call to the plumber I had used for the Uncles in the old location, before I could get a plumber to come out.  But the plumbing work was completed a couple of weeks after closing.

Then the wooden floor needed to be repaired, sanded, stained, sealed, and varnished.  Blyly called three flooring companies. The first two didn’t follow through with the promised proposals. Finally, one came in and did what was needed.

…A third company came up with a proposal that I agreed to, but then ignored what was in the proposal when doing the job.  But the workmen who actually did the work did a good job that I am happy with, even if it was not what was in the proposal.  But the fumes from the finished floor made my eyes water for days afterwards, and I had to wait for the floor to finish curing before I could move any furniture onto it.  After weeks, the fumes are still bad enough that I haven’t taken Ecko to the new store yet.

A critical requirement for a bookstore is, of course, bookshelves, and Blyly is working on that now.

When all the former business’ stuff was gone, I was able to plan the layout of the bookshelves more carefully.  There were many, many electrical outlets sticking out from the walls too far for me to put shelves where I wanted them, there were electrical outlets dangling from the ceiling, there was one outlet and switch that need moved, and a new outlet box needed added to the office.  It took a couple of days, but all that work has now been done.

About a week ago a truckload of lumber was delivered for new bookshelves, and work has begun on the new shelves.

Several people have offered to donate bookshelves, but in most cases that requires me to rent a truck and transport the shelves.  I hope to be able to start doing that next week, now that the floor has dried enough for it to be safe to place bookshelves on the fresh varnish.

Getting an internet connection for the new location has also been a challenge.

When I added internet to the old location last century sometime, I called Comcast and they ran cable from the telephone pole across the alley to the back of the building within a couple of days.  Since Lake Street has been the main east-west business corridor between downtown and the southern edge of the city for over a century, I thought that getting an internet connection a block south of Lake Street would be as easy as it had been to get a connection a block north of Lake Street. I was wrong.

Comcast first told me that they weren’t sure if it would be possible for them to provide an internet connection for the new building.  A worker came out to the building to see if it was possible, and I pointed out the telephone pole across the alley and the back of the building and I pointed out the best spot for the cable to enter the back of the building.  He pointed out that there was not yet a box on the telephone pole to connect the cable to, and that it would take about a month to get the box installed on the pole.  Wednesday of last week I received an e-mail that the box had been installed and Comcast would be contacting me shortly to schedule an appointment to run the cable.  The cable installation will be early next week.

Here’s why the internet connection is essential:

I’ve had discussions with the point-of-sale system company about what I want for the new computer network.  After they ship the system, they will need an internet connection to set up the system, not to mention running charge transactions, placing book orders, etc.  At the old location, the system ran on a network of ethernet 5 cables, and the previous business at the new location ran his system on a network of ethernet 5 cables.  But the vendor tells me that the system has changed enough over the last couple of years that I will have to replace all the ethernet 5 cables with ethernet 6 cables.  I waited until Comcast gave me a date for the internet connection before I ordered the new computer system, but it is now on order.

In the meantime, Blyly is selling books:

Late in April I received the shipment of signed copies of Fair Trade (Liaden #24) by Sharon Lee and Steve Miller, and it took all the free time I could find for 9 days to ship out all but 1 of the advance orders for the book (still waiting for a response to my e-mail question for that last order), and fresh orders are still coming in.

Between shipping books and working on the new building, it feels as if it has taken far too long to get all of the Tolkien-related books added to Abebooks.  But I hope that within another week I’ll be able to get to listing the Jack Vance books, although I have a lot of Harry Turtledove books to get through first.  I don’t think I’ll get through the entire alphabet before I have to start moving the library to the new building.

[Thanks to Paul Weimer for the story.]