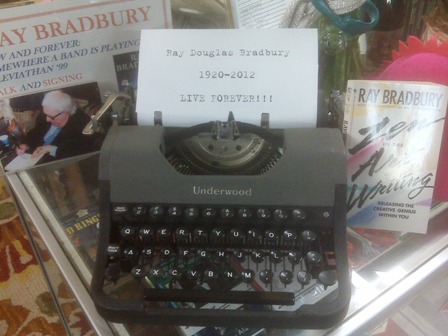 Tributes to the late Ray Bradbury are being posted everywhere today.

Before we left, he quietly took me aside and invited me to come back without my friends. They were nice kids and all but they didn’t have my commitment to writing so he had “a couple of things” he wanted to say to me and me alone.

Me and me alone went back a week later and he must have spent three hours slathering me with advice. Absolutely none of it was about story content. He didn’t talk about plot or character motivation or plot structure. He talked about being a writer…about living like one, working like one, thinking like one. A lot of it was very pragmatic, about how to not fantasize the profession into something it was not. It was not, for example, a profession where visions pop into your genius brain and you just type them up, send them in and get hailed as brilliant. He had worked damn hard to become Ray Bradbury and every day, he worked damn harder to stay Ray Bradbury.

He did not make me want to become a writer. I was already there. What he did, I suppose, was make me think as follows: Ray Bradbury gave me all that time and encouragement. I can’t waste that.

His grandson, Danny Karapetian, shared these words with io9 about his grandfather’s passing: “If I had to make any statement, it would be how much I love and miss him, and I look forward to hearing everyone’s memories about him. He influenced so many artists, writers, teachers, scientists, and it’s always really touching and comforting to hear their stories. Your stories. His legacy lives on in his monumental body of books, film, television and theater, but more importantly, in the minds and hearts of anyone who read him, because to read him was to know him. He was the biggest kid I know.”

Bradbury’s poetically drawn and atmospheric fictions—horror, fantasy, shadowy American gothics—explored life’s secret corners: what was hidden in the margins of the official family narrative, or the white noise whirring uncomfortably just below the placid surface. He offered a set of metaphors and life puzzles to ponder for the rocket age and beyond, and has influenced a wide swath of popular culture–from children’s writer R.L. Stine and singer Elton John (who penned his hit “Rocket Man” as an homage), to architect Jon Jerde who enlisted Bradbury to consider and offer suggestions about reimagining public spaces.

“Nostalgia is eternal. And Americans are often displaced from their origins and carry an anxious memory of it, of losing their origins. Bradbury reminds us of what we were and of what we could be,” Benford said.

“Like most creative people, he was still a child, His stories tell us: Hold on to your childhood. You don’t get another one. I don’t think he ever put that away.”

An unathletic child who suffered from bad dreams, he relished the tales of the Brothers Grimm and the Oz stories of L. Frank Baum, which his mother read to him. An aunt, Neva Bradbury, took him to his first stage plays, dressed him in monster costumes for Halloween and introduced him to Poe’s stories. He discovered the science-fiction pulps and began collecting the comic-strip adventures of Buck Rogers and Flash Gordon. A conversation with a carnival magician named Mr. Electrico that touched on immortality gave the 12-year-old Bradbury the impetus to become a writer.

In 1934 the family moved to Los Angeles, where Mr. Bradbury became a movie buff, sneaking into theaters as often as nine times a week. Encouraged by a high school English teacher and the professional writers he met at the Los Angeles chapter of the Science Fiction League, he began a lifelong routine of turning out at least a thousand words a day on his typewriter.

Ray Douglas Bradbury was born August 22, 1920 in Waukegan, Illinois.  He moved with his family to Los Angeles in 1934, at age 13, and in 1937 discovered the Los Angeles Science Fantasy Society. Through that organization he met Forrest J Ackerman, Hannes Bok, Edmond Hamilton, Ray Harryhausen, Robert A. Heinlein, Henry Kuttner, and many other friends who would go on to become SF luminaries.

Gene Seymour
CNN
Bradbury was a writer of perils, possibilities and wonder

Bradbury’s more intelligent and incisive readers found greater resonance in his writing than his deceptively simple approach evoked on the surface.

One such fan was the Argentine fabulist and poet Jorge Luis-Borges, who in his introduction to his Spanish-language translation of “The Martian Chronicles, asked: “What has this man from Illinois done, I ask myself when I close the pages of his book, that episodes from the conquest of another planet fill me with horror and loneliness?”

“For many Americans, the news of Ray Bradbury’s death immediately brought to mind images from his work, imprinted in our minds, often from a young age,” President Obama said. “His gift for storytelling reshaped our culture and expanded our world. But Ray also understood that our imaginations could be used as a tool for better understanding, a vehicle for change, and an expression of our most cherished values. There is no doubt that Ray will continue to inspire many more generations with his writing, and our thoughts and prayers are with his family and friends.”

“He was my muse for the better part of my sci-fi career,” director Steven Spielberg said. “He lives on through his legion of fans. In the world of science fiction and fantasy and imagination he is immortal.”

“Ray Bradbury wrote three great novels and 300 great stories,” author Stephen King said. “One of the latter was called ‘A Sound of Thunder.’ The sound I hear today is the thunder of a giant’s footsteps fading away. But the novels and stories remain, in all their resonance and strange beauty.”

Ray affected writing more than he intended to: he made short stories look much easier than they are. A lot of new writers fell for that. In the early days Ray was a fantasy writer in a science fiction world – it’s hard to remember that science fiction used to sell much better than fantasy – but he could do science fiction as well, witness Fahrenheit 451. At one time the whole genre was dominated by “ABC”, Asimov, Bradbury, and Clarke, although usually someone would quickly add Robert Heinlein. Now the Big Four are gone. They will all be missed.