Many critics and scholars had identified the great change in his writing after World War II, when he matured from a skilled imitator of the themes and settings of other genre masters into a creator of original tales told through a unique and metaphor-rich style. But I was surprised to find through my own research and interviews that this transition happened far more quickly than the publication record reveals; some of his best dark fantasies and early science fiction tales were composed during the early and middle war years, but most would not reach print until the late 1940s. Many of the stories that he would weave into The Martian Chronicles (1950) reached print in the late 1940s, but some of the best — “Ylla,” which opens the Chronicles, and “The Million-Year Picnic,” which closes them — were also written during the war, a year or more before he first began to move out of the genre pulps and into the mainstream American magazines. 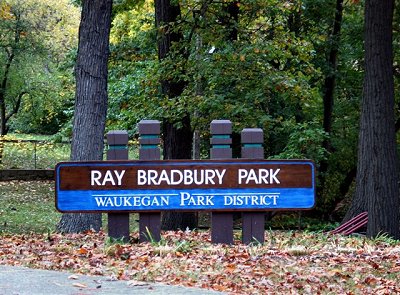 And in Bradbury’s next public honor in his hometown of Waukegan may be a bronze sculpture.

Author Ray Bradbury never forgot his Waukegan roots — and now there is a movement in his hometown to bring his likeness back to the city in the form of a bronze sculpture.

“I have been thinking about it for awhile,” said Richard Lee, executive director of Waukegan’s library, adding that he heard Hank and Beverly Bogdala of Waukegan were also interested in pursuing the idea.

Hank Bogdala has already seen his idea for a Jack Benny statue installed in Benny Plaza at Genesee and Clayton streets downtown. Benny is another Waukegan native. His statue cost $55,000, paid for by contributions.

3 thoughts on “Bradbury in Bio and Bronze”