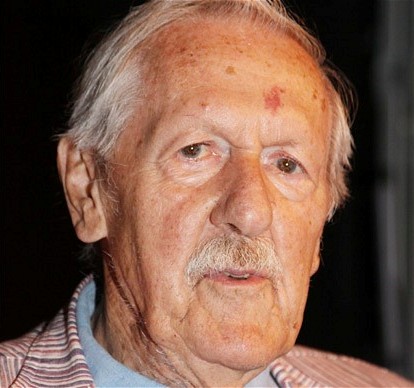 Brian Aldiss, who marked the start of his career with a nomination for the Best New Writer Hugo (1959), gained a place in the SF Hall of Fame (2004), and received honors from the Queen (2005), died in his sleep August 19, the day after his 92nd birthday.

Everything in life was a source of material for Aldiss. He served in the British army in WWII in Burma, experience that later backgrounded his “Horatio Stubbs” series of non-sf novels. After demobilization in 1947, he was hired as a bookshop assistant in Oxford, and wrote humorous fictional sketches about his work for The Bookseller, a trade magazine. That material, rounded into a novel, became his first book, The Brightfount Diaries (1955).

By then Aldiss had also started to write sf. The SF Encyclopedia lists his first published sf story as “Criminal Record” in Science Fantasy (July 1954), and other stories appeared in 1954-1955.

But it wasn’t until 1956 that he had his first encounter with fandom. Why did it take so long? He told Rob Hansen (THEN) in a letter:

In the war I received a badly mimeographed flier for a fan group. I must have written for it. It carried a photo of the group. My father seized it at the breakfast table, shouted ‘They’re all perverts!’ and flung the brochure on the fire. So I had no acquaintance with fandom until they got in touch with me in 1956, after I had won the Observer prize for a short story set in the year 2500 AD. My contact then was Helen Winnick, who worked in London in Hanging Sword Passage. We went down to the White Horse, where I met Sam Youd and John Brunner….

The 1957 Worldcon in London was his first convention. The prolific and popular author rapidly became an important figure in sf. He served as President of the British Science Fiction Association (BSFA) from 1960-1964, an office that was an honorary figurehead, and ceremonial in purpose. He gained international acclaim when the five novelettes of his “Hothouse” series collectively won the 1962 Best Short Fiction Hugo. 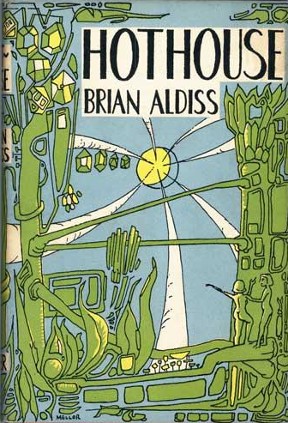 He received many career awards. He was named a SFWA Grand Master (2000), was a Living Inductee to the Science Fiction Hall of Fame (2004), recognized with the Science Fiction Research Association’s Pilgrim Award (1978), and with the Prix Utopia (1999) for life achievement from the French Utopiales International Festival. He was elected a fellow of the Royal Literary Society in 1989.

In 2005 he was made an Officer of the Order of the British Empire (OBE) in the Queen’s Birthday Honours. He joked with Ansible’s editor:

I was greatly chuffed by the award “for services to Literature” — a euphemism in this case for SF…. But when chatting to Her Majesty, I was disappointed to find she had only got as far as John Wyndham and the triffids. “What do you like about it?” I asked. She replied, “Oh, it’s such a cosy catastrophe.” I blushed.

While many prolific authors with long careers have been frustrated to see their work go out of print, Aldiss was rescued from that fate by former HarperCollins imprint, The Friday Project, which published more than 50 of Aldiss’ backlist works in 2013.

Aldiss was twice guest of honor at British Worldcons (Loncon II, 1965; Seacon, 1979) and toastmaster at a third (Conspiracy, 1987). He reciprocated fandom’s affection for his writing and himself, as Jonathan Cowie (Concatenation) explains:

SF and SF fandom ranked highly in Brian’s life: he liked to say that fandom was the unusual kingdom in which the serfs threw feasts for the kings rather than the other way around.  However family came first which came as a surprise to the 2001 Eurocon organisers that originally had us both down as guests (mine was lowly fan GoH) but I e-mailed him to enquire whether we might travel together: safety in numbers and all that when travelling overseas. But Brian had to decline as his family was throwing him a special get-together at that time.  Rest assured, though family came first, SF fandom as a priority came not long after. At a US gathering he showed an invitation he had from Buckingham Palace for a reception wit the Queen but  that clashed with the US convention: the SF convention easily took priority, no contest.

And at the Loncon 3 (2014) closing ceremonies, which fell on his birthday, August 18, he was serenaded with a rousing rendition of “Happy Birthday” by the entire audience. For many who journeyed to the con it was also a kind of farewell. 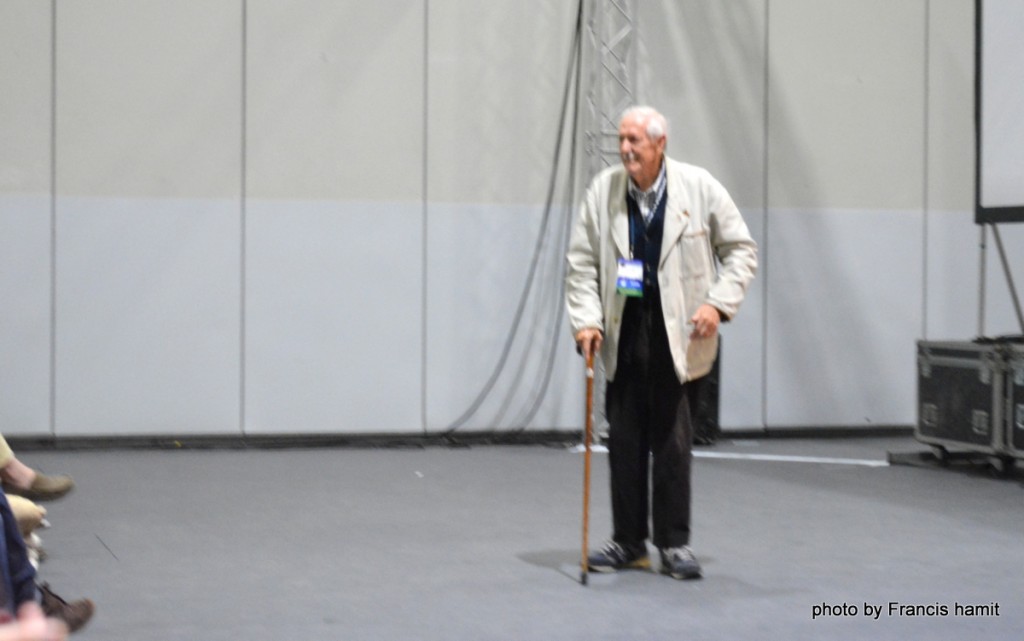 Brian Aldiss being serenaded with “Happy Birthday” at LonCon 3 in 2014.

Aldiss’ first marriage was to Olive Fortescue (1948-1965, ending in divorce), and his second was to Margaret Manson, who predeceased him in 1997. He is survived by his partner, Alison Soskice, and four children: Clive and Wendy from his first marriage, and Timothy and Charlotte from his second.

This appreciation has focused more on Aldiss’ connection with fandom. Here are links to several insightful appreciations about his writing and literary impact.