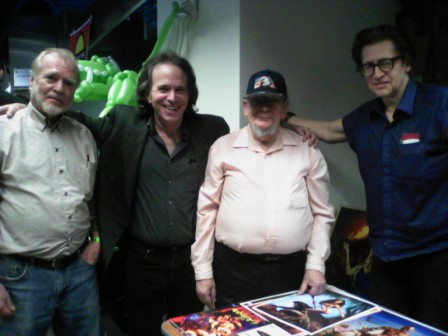 By James H. Burns: There’s nearly 270 years of fandom history in this photo, with Bill Morse, James H. Burns, Dave Miley and Marcus Boas uniting for the first time ever in a photo, despite nearly forty years of mutual friendship! (It all happened  at the scene of today’s Big Apple Comic Con, right next door to a very famed fandom locale, the Hotel Pennsylvania (once, the Statler Hilton), in Manhattan.)

(Is it possible that, cumulatively, these fellas have been to over one thousand conventions?)

Bill Morse could be counted as one of the original comic book dealers, is a long time bibliophile, and is well known in Edgar Rice Burroughs fandom. He also owned what may very well have been the very first comics shops in America (in Staten Island, in the mid-1960s). Later, Morse was one of the pioneers of DIRECT DISTRIBUTION for periodicals, to specialty comics, science fiction and other specialty bookstores.

James H. (Jim) Burns began moderating convention panels in 1976 (including for the Playboy Science Fiction Convention!), helped run that year’s Marvel Con and the programming for Phil Seuling’s comic convention, all while starting a writing career whose genre credits included Starlog, Fantastic Films, Prevue, Cinefantastique, Heavy Metal  and Twilight Zone….  (Plus you can read a lot of his modern musings, here, at File 770!)

Dave Miley himself should be famous as the manager of what had to be one of the very first comics oriented shops in America, in 1968, on St. Mark’s Place in the East Village. Just a short while later, Miley would begin a long association with Bill Morse when the latter opened the Village Comics Art Shop, whose most famous location was on 6th Avenue (the Avenue of the Americas) near West 4th Street, just a few doors down from the Waverly movie theatre.  Just recently, Miley has also been exploring his long aborning abilities as an ARTIST, and received a Blue Ribbon award, in a regional New Jersey competition.

Both Morse and Miley have also been involved in publishing ventures.

Marcus Boas has been a noted fantasy artist for over four decades, creating covers for Donald Grant, Castle of Frankenstein, Heavy Metal, Jim Steranko, Robert Weinberg, and a plethora of film posters and paperback covers,  particularly in the heroic fantasy genre, including several notable depictions of the world of Robert E. Howard, and for Belmont Books).

1 thought on “Centuries of Fannish Friendship”