By James H. Burns: You can keep your Robby, and Gort, and even your C-3PO…

Because the first robot of my childhood appeared as a chocolate syrup container:

Beginning sometime around 1963, Clanky was a product from Family Foods Incorporated. But I was surprised to find out some years ago – when watching Clanky’s original TV commercial on the internet — that it may have been meant to be a SPACEMAN.

Either way, by 1965, a thoroughly washed out container soon became one of my favorite bathroom toys (along with rubber band-propelled ships, diving submarines powered by baking soda, and Crazy Foam)!

In fact, it’s entirely possible I imagined Clanky as another almost forgotten fantasy character from the early ’60s, Diver Dan.

Diver Dan was a syndicated live-action, roughly six-to-seven minute daily program, telling a serialized story over a week or two; designed to be shown along with cartoons and the like, on the era’s popular local kids TV shows. Dan was portrayed by an actor (Frank Freda) in an old-fashioned diving suit (hence, his resemblance to Clanky), who interacted with puppet fish, including the villainous Baron Barracuda (who spoke like Bela Lugosi, and whose sidekick, Trigger, somehow managed to keep a lit cigarette in his mouth)!

Almost all of the puppets were voiced by Allen Swift, a veteran of the classic 1950s NBC kids show, Howdy Doody, who was fresh from hosting his own children’s program for several years, on WPIX, in New York, and who was just on the verge of launching a long-time, successful career as a voice over artist (with occasional Broadway, and Off-Broadway stage work. (Born Ira Stadlen, he was also the father of Broadway veteran Lewis J. Stadlen!)

Ingenuously, Diver Dan was filmed with an aquarium between the camera and the set, making everything truly appear “under water.”

The adventures of Dan and his friends — Goldie the Goldfish, Sea Biscuit the Sea Horse, Skipper Kipper and Doc Sturgeon — were actually quite charming. They often featured whom I’m pretty sure was one of my very first crushes, Miss Minerva the Mermaid, played in full beauteous form by actress Suzanne Turner. (I’m also pretty sure I soon got her confused with the Chicken of the Sea mermaid, then featured in the brand’s television ads…)

My parents would pick up a Clanky for me at Valley Poultry, in Franklin Square, Long Island — a cold cuts specialist, and small grocery (what some folks used to call an “appetizing store.”)  (Known for the last several decades as “Valley Caterers,” the market actually should have been famous, for many of those years, for having corned beef and pastrami to rival that of the best delicatessens in Manhattan!)

I don’t know if Clanky was otherwise difficult to find in my neighborhood. (We had an A&P, Shoprite and Hills in our immediate Valley Stream/Elmont environs); but food product distribution, then as now, except for the biggest brands, could be quixotic.  Family Foods was based in Chicago, and internet references say that the “chocolate flavored syrup” made its way as far as California.

Valley Poultry (known to some, back then, as Franklin Poultry) was also notable for having a small farm-like area with chickens, turkeys and other barnyard creatures. I can still remember that my favorite of the animals was a unique rooster whom my parents and I nicknamed “Bumpy Head.” (We’d sometimes wonder where he went, when it was raining….)

And today, the juxtaposition, in memory, of Clanky, an icon of the future, with such a bucolic scene, strikes me as uniquely American…!

Unbeknownst to us, in the mid 1960s, was that the grazing ground was soon to become part of a paved over parking lot.

Yet, intriguingly, it was also at Valley Poultry that I encountered one of the rarest of 1960s fantasy totems. At the front of the shop were gumball machines which would sometimes vend trinkets or toys or other unusual paraphernalia — 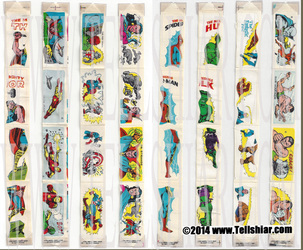 By 1966, merchandising of the Marvel Comics line was at its initial apex, fueled by the syndication of the Marvel Super Heroes cartoon show, broadcast daily across the United States.  One of the most unique items were stickers featuring a dynamic image from the artwork of Jack Kirby, Steve Ditko, Don Heck and company (co-inspired by the imagination of Stan Lee!)

These mementos of the fantastic — single frame vignettes of action and adventure — were incredibly evocative of the era, and now are so rare that there are almost NO images of them on the internet.  I had, in fact, forgotten about them, until 1988, when I picked up one of Lancer Books’ 1966 Marvel Comics paperback reprints, and there were Thor stickers glued to the inside cover!

(Magic, when we’re children, can be much easier to come by — and astonishing to think that it once could be had for a nickel!)

Clanky, it should be remembered, debuted at the height of the first major inception of interest in the manned space program. It was also the season of the Ideal Toy Company’s Mr. Machine (a windup, rolling, top-hatted, see-through “mechanical man”) and Marx’ Rock ‘Em Sock ‘Em Robots (which Clanky preceded). On television, one could watch Fireball XL5’s Robert the Robot, Rosie on The Jetsons, and eventually, the automaton on Lost In Space (never called anything but by the sobriquet, “Robot.”).

When I began shopping on eBay in the late 1990s, a Clanky (near mint, albeit empty!), became one of my very first purchases.

(A Clanky can still be found, easily, for roughly ten bucks.)

He is, of course, a happy remnant of another playtime’s future.

But as I look at the little fella across my office, I find it intriguing that such a memento of yesterday (and one of the few souvenirs of that particular generation to remain so readily accessible):

Can still be filled with so many tomorrows.