It’s a face-lift when you give a building a new façade – is there also an idiom for tearing off that replacement to restore the original? Because that’s what’s happened at Clifton’s Cafeteria.

Clifton’s has been making fanhistory for over eight decades. In the late 1930s it hosted early meetings of the Los Angeles Science Fantasy Society in the Little Brown Room. Long-time members have had reunions there over the years, including one honoring the club’s 70th birthday (“LASFS Cuts the Birthday Cake”) that was covered on local TV news because it drew those teenaged fans who grew up to have stars in the Hollywood Walk of Fame, Ray Bradbury and Ray Harryhausen.

Clifton’s has had the good fortune to be acquired by Andrew Meieran, famous for developing Edison’s night club from the old downtown power house. As part of his plan to revive the cafeteria’s architectural glory Meieran had builders  peel away the grate-like aluminum covering that has concealed the building’s original 1904 façade for half a century, added at the time thinking it would give the place a modern appearance.

Bob Reed, who conducted a fannish tour of Clifton’s for io9 and complained “The modern face ain’t as cool as the original” will be pleased. 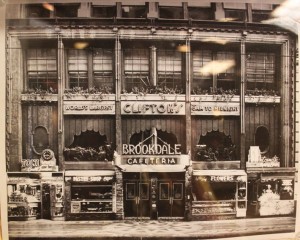 1 thought on “Clifton’s Cafeteria Gets a Makeover”