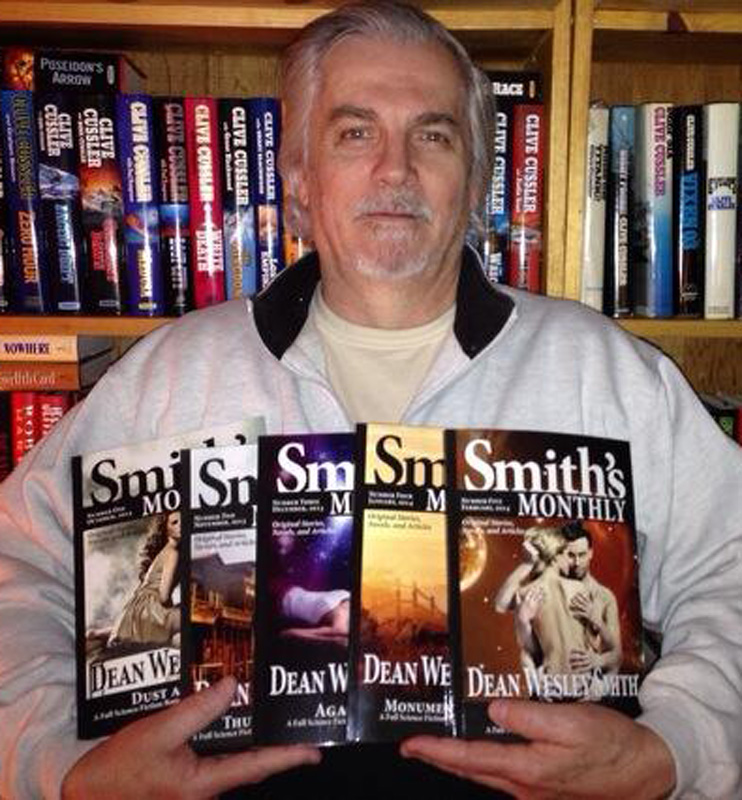 By Carl Slaughter: Dean Wesley Smith is a busy guy. He publishes, he writes, he teaches workshops, he operates a collectables bookstore chain. He writes 80,000 words a month for his own magazine. And he’s training for a marathon.

CARL SLAUGHTER: Why launch your own magazine?

DEAN WESLEY SMITH: I suppose it just seemed like a good idea at the time. In reality, as I was getting started firing back up my writing after making a many-year transition from media and ghost writing, I needed some sort of really crazy goal. I tend to work well with crazy goals.

So one day I was glancing through my digest collection (I have pretty much every digest in science fiction, mystery, and western put out from 1943 until 2000 or so) and I noticed the Mike Shayne Mystery Magazine. Then I picked up a copy of the Zane Gray Western Magazine. For some reason, the thought hit me that wouldn’t it be fun to fill entire issues of magazines as some of the pulp writers did at times with pen names in the 1940s and 1950s.

And from there the crazy idea started. My magazine would be the same size as the monthly Asimov’s magazine, only I would write it all. A full new novel, four or five short stories, a novel serial, and other stuff, all written by me. My wife, Kristine Kathryn Rusch was the one who came up with the name Smith’s Monthly.

Now, 36 issues later, I haven’t missed a month. 36 novels, about 140 short stories, and numbers of nonfiction projects as well, including a golf-humor book.

CS: Are your stories all speculative? If not, what other genres?

DWS: My roots are in speculative fiction, but I write across the board. That comes from my ghosting days for New York publishers. They would call me and ask me to write a book because some famous author was sick and I needed to write that. I figured I could write anything with a little study, but I must admit Cozy mysteries are tough and I might have to slash my wrists if forced to write Regency Romance.

But in Smith’s Monthly most stories (except the mystery stories) have an element of speculative fiction or Twilight Zone elements to them.

DWS: I have a bunch of series.

Poker Boy is a goofy superhero series that has only had one novel but about thirty-five short stories.

CS: I see a lot of cowboy covers. Are these traditional westerns? Alternate history? Steampunk?

DWS: The western cowboy covers are all the Thunder Mountain novels. Alternate history time travel, set mostly in the west. Great fun to write, very complex since I have come up with a mathematical way of making it all work.

CS: I also see a lot of mystery. Are you active in the mystery genre? Do you sell to mystery markets? Won any mystery awards?

DWS: I have had one story published in Ellery Queen, won no awards in mystery. But I have written a bunch of thrillers. One thriller that I never really mailed out was the only book I had rights to coming into indie publishing besides my first sf novel out of Warner from 1989. So I put that one thriller in and also serialized my first novel in Smith’s Monthly, without one word changed from the Warner Questar edition.

The mystery covers are for the Cold Poker Gang novels.

CS: I also see a lot of what looks like erotica/romance? How much relationship versus how much speculative? How do you integrate one into the other?

DWS: Nope, don’t do any erotica. I did that back in the day, meaning way back in the 1980s, writing letters for Penthouse for money. No interest in writing that anymore. But most of my novels have a light romantic element to it.

CS: I also see a lot of ghost stories. What, no zombies, no vampires, no superheroes?

DWS: The ghosts are an offshoot of my Poker Boy series. Basically they are ghosts that are recruited after they die to join a team to help people.

I have all the rest of that in my Poker Boy series. Almost every issue leads off with a Poker Boy story. He and his team, which includes Front Desk Girl, Stan, the God of Poker, and Lady Luck herself save the world regularly from all sorts of fun things.

CS: How do you build a series around poker?

DWS: I wrote a thriller called Dead Money about a major professional poker player setting up a team and solving the death of his father. Never written another book in that series, but the hero of that thriller shows up at times in my Cold Poker Gang novels.

Not really around poker, just a way for a bunch of retired detectives to get together to work on cold cases.

CS: Are all the stories written exclusively for the magazine or are there also reprints?

DWS: At first I wrote exclusively for the magazine, then decided that stories that had been in DAW and Baen anthologies over the years should be brought forward. Readers didn’t see most of those stories twenty and thirty years ago. Now I have used Smith’s Monthly to gather most of my main published fiction together, including stories published originally in F&SF.

I do not put in any of the horror stories I published way back in the 1980s and early 1990s. I was nominated twice, I think, for a Stoker Award, but don’t feel those stories fit in Smith’s Monthly, so they are vanishing into the dust of time.

All novels are written originally except for the two I mentioned. I don’t have any others I own rights to out of the hundred plus novels I wrote for traditional publishers over the years.

CS: Are you still selling to speculative markets or are all your speculative stories going into your magazine?

DWS: At the moment everything is just going into my own magazine except for two or three a year that are for invite anthologies. I keep threatening to start sending out other stories. But I have my own magazine, so can’t figure out why I should.

CS: How many stories go into each issue?

DWS: Four or five short stories. If the novel is very short, down around 45,000 words, I will put in six short stories. Also a serial novel or serial nonfiction book most issues as well.

CS: How many total words?

CS: Any plans to accept submissions?

DWS: Nope, just my stuff. I read slush for a lot of years with Pulphouse and with Star Trek: Strange New Worlds anthology series. Never again will I read slush.

DWS: I sort of look at every issue of Smith’s Monthly as a stand-alone collection of my work. So I have 36 of them out now. No repeats of any stories from any issue.

So they are all available in paper and in electronic format from any sales place in the world. And they sell regularly. Not many copies per issue, but when you add up sales from around the world and 36 issues, it’s a pretty good amount of money every month. Surprises me at times, actually.

Also, we do subscriptions to the magazine in either paper or electronic format.

And I have a Patreon page that supports my blog and every person there gets a copy of Smith’s Monthly as well when it comes out.

Then two months after the issue comes out, WMG Publishing Inc. publishes the novel from the issue as a stand-alone novel. Those do pretty well.

And I will be putting short story collections together starting this next year with stories from the magazine.

So lots and lots of cash streams from the magazine.

DWS: I really don’t have one to speak of. I get it out everywhere and then we publish the novel.

CS: How do you crank out this kind of volume while still working on Fiction River and other fiction projects, plus workshops?

DWS: For three years now on my blog, as I have been doing this magazine, I have been doing a daily blog (haven’t missed a day) about the writing. Scares people because I basically do other things all day long and only write about three hours a day late at night. It doesn’t feel like I am doing much volume at all, but people find it encouraging. And I’m not a fast writer. I do about a thousand words an hour. It just adds up.

CS: Besides Fiction River and Smith’s Magazine, what other fiction projects are you involved in?

DWS; I am the CFO of WMG Publishing Inc, so that takes time and we do a great deal of things there. WMG has over 600 titles now. I do the workshops for free for them because I love teaching and learning. Also, we have a new magazine project planned that we will announce in the middle of this coming year. I will be the editor. Great fun.

One thing that takes a large amount of my time is WMG has two brick-and-mortar stores here on the coast. Collectable stores and one has a bookstore inside the collectable store. Comics, a few hundred thousand comics, plus toys, games, you name it. All my hobby and passion. I don’t run the stores, but I am around them all the time.

And both stories have a major eBay store. All kinds of great stuff on the eBay stores. For example, I just found something very neat we are putting on one store. It is the program book from the 4th World SF Convention in LA. 1946-47. It has 40 signatures in it of members who attended that convention. In other words, 40 signatures of first fandom fans. Amazing.

CS: Speaking of workshops, what’s going on on the workshop front?

DWS: I am doing ten, online, six-week workshops every month. They rotate through a bunch choices every other month or so. I love doing them still. The moment I start getting bored, we’ll shut them down. Full schedule is at www.wmgpublishingworkshops.com.

We also do four workshops every year here on the Oregon Coast for professional writers only. Those have writers coming in from all over the world and are fantastic fun. That schedule is up under Coast Workshops at the top of my web site.

DWS: I suppose I am approaching 70, but actually only 66. Stuns me when I say that number and I have no idea what retirement even might be. So nope, just doing my magazine and playing in collectables.

CS: What’s on the horizon for Dean Wesley Smith?

DWS: Besides continuing to write, do my own magazine, edit a new magazine project this coming year, play and work around my two collectable stores, and help keep WMG Publishing on track, I’ve set a running goal.

That’s right, running. In the last number of years I have dropped about 70 pounds from my heaviest weight. When my friend book-collector Bill Trojan died suddenly at Worldcon in Reno, I sort of woke up. He was only a couple years older than me, but heavier.

So I still have about fifteen pounds to go, but I hope to run a half-marathon (13 plus miles) every month of 2017 until November when I will run a marathon.

So that’s what is in the future for me. Thanks for having me.