Doris Lessing passed away at home November 17. She was 94. Winner of the Nobel Prize for Literature, she was also a past Worldcon guest of honor, at Brighton in 1987.

Lessing authored more than 50 novels. Beginning with Briefing for a Descent into Hell (1971), she began to write what she called “inner-space fiction.” Then, in the novel series Canopus in Argos: Archives (vol. 1–5, 1979–1984) Lessing wrote about the post-atomic war development of the human species.

“Lessing’s central sf achievement, the Canopus in Argos: Archives sequence places the crises of human self-striving – and the crises facing the planet of our birth – into a metaphysically conceived interstellar frame,” John Clute wrote in the Science Fiction Encyclopedia. “Everywhere the drive – sometimes thwarted – is towards literal union with universal principles (or God). The series exudes, at times, a piety not normally associated with sf; but at others the perspectives it opens are illuminating. In Lessing’s hands, the instruments of sf become parables: lessons in finding paths that may lead us out of the sour muddle of unenlightened worlds.” 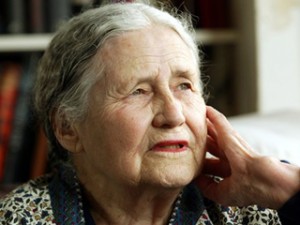 When Lessing was awarded the 2007 Nobel Prize for Literature, the citation called her “that epicist of the female experience, who with scepticism, fire and visionary power has subjected a divided civilisation to scrutiny.”

Not that she was impressed. She told the reporters who brought her the news, “Oh Christ, I couldn’t care less.” (Which may have been the very same thing Chesley Bonestell said about a Special Hugo Award he was given in 1974, before relegating it to his bathroom to sit on the lid of the toilet tank.)

Nor did that mean the literary world had finally relaxed its prejudices against the SF genre. Critic Harold Bloom belittled her selection for the Nobel Prize to a wire service reporter: “Although Ms. Lessing at the beginning of her writing career had a few admirable qualities, I find her work for the past 15 years quite unreadable … fourth-rate science fiction.”

In 1999 the Queen appointed Lessing a Companion of Honour, an exclusive order for those who have done “conspicuous national service.” She’d previously turned down the offer of becoming a Dame of the British Empire “because there is no British Empire.” Being a Companion of Honour, she explained, means “you’re not called anything – and it’s not demanding. I like that.” Being a Dame was “a bit pantomime.”

The text of her Conspiracy GoH speech is available in Worldcon Guest of Honor Speeches, edited by Resnick and Siclari. She also wrote a sidebar for the 1987 Worldcon souvenir book about how watching a TV documentary about nudism led her to think about the original creation of clothing, culture – and science fiction stories. It closed with an example of one of these ur-stories.

The storyteller said, “People, listen. One night the bravest young man of the tribe summoned Heru the owl and said, ‘Take me up on your back and fly with me to that floating ghost up there, just above the trees – quick, before it crosses the sky and goes down over the mountains. I want to ask it some questions. I want to say “Who are your people who grow slowly fat and then grow slowly thin? Where do you live? Why do you send one of you every night over our valley to watch us? We want to know who you are, what you are…’

“Very well, says Heru, I’ll take you but what will you give me in exchange?

“I’ll tell you a story as I sit on your back and we fly together, will that do?

“That will do, says Heru, and the brave young man climbs on his back and….”