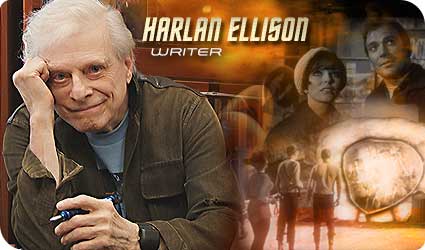 Harlan Ellison is giving the fan’s their money’s worth at the Star Trek Con 2014 in Las Vegas. Today when he overran his speaking time, Marina Sirtis had to go onstage to bring him off.

He’s there to promote his current work on the IDW comic book series adaptation of “The City on the Edge of Forever” The Original Teleplay.

Ellison is slated for a solo talk and two other panels, one with Walter Koenig, and another with Grace Lee Whitney.

It’s been over 20 years since he’s done a Creation event.

If you’re curious about the rest of the con, here’s a Las Vegas Guardian article about the first day .