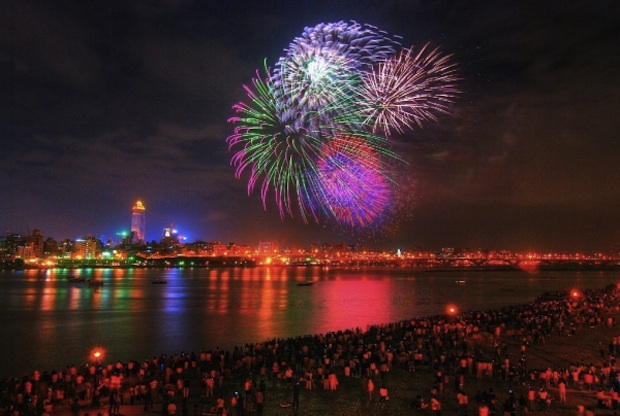 By James H. Burns: I’ll put the blame, or really, that’s credit, on File 770, for getting me more ready than even usual to think about fireworks.

I was reading the Ray Bradbury “Fire Balloons” piece, a few hours ago, and it got me to Googling. I was tempted to leave a response with all the neat information I found about what’s also called “fire lanterns,” how to make them, how to fly them (including a few You Tube tutorials), as well as the discovery that shouldn’t have been so surprising, that you can order a whole bunch of different varieties of the constructs from Amazon…  But I didn”t want to be responsible for any potential disasters, near or otherwise.

But then, it was also time to look to the skies.

When I was a boy, you could see the suburban town pyrotechnics show from the corner in front of my house, even though the launch field was miles away.

As a three year old, it was thrilling just to stay up a little bit later than usual, to see the sky light up with so many new jewels. I’m not sure if I realized, at the time, that this was concurrent with the beginning of the Gemini missions, to which I would also soon become devoted.

On the Fourth, my cats — many of my cats, through the decades — would hide under the bed for hours, and Jenny, the great Dalmatian who I had the privilege of knowing from when I was eleven years old, until I was twenty-four, had to get a tranquilizer. This, of course, is the only major downside to fireworks in one’s town; our pets’ reactions…

But has there not always been a science fictional aspect to all this spectacle, beyond Bradbury, and just in its natural state?

I can remember how thrilled I was when I finally got to start launching some fireworks, of my own…

In the 1970s, I had become good friends with long time fan, Paul Jones (we were both in our teens!). Paul was part iof a New Jersey contingent of fandom that would often help out on the security for some of the Manhattan comic book and science fiction conventions, including Chip (then Chuck) Nanco, and the late Charlie Hawse. (Charlie, in the 1980s, wound up helping the great comics artist Murphy Anderson, on coloring some of his assignments. Nanco also did some terrific comics work,including illustrating a Classic Comics adaptation, for Marvel.)

Getting to know these guys was one of the luckiest breaks of my life, and ultimately resulted in my spending many happy weekends, for years, in Jersey; in some of the prettier rural parts, you don’t usually hear about. Paul had a long time friend, Emil — now a computer scientist with many patents –whose home wound up being the centerpiece for many of our parties, and get-togethers. Before the Fourth, we’d drive down to a parking lot in Little Italy, in Manhattan, where somehow someone knew there’d be a gentleman selling fireworks from the back of his car…

Maybe it’s a guy thing, but there is a great deal of joy in lighting a match, igniting a fuse, and watching some new brilliance, however, temporary, join the skies above.

(In 1976, there was a rather interesting night when a few hundred genre folk journeyed to the top of a mid town Manhattan hotel, to watch a fireworks display, during Phil Seuling’s International Comic Art Convention …)

In late July of 1989, driving back to New York from the Atlanta Fantasy Fair with one of the convention dealers of the era, I stopped at one of the huge fireworks shops along the way. It remains rather extraordinary, for the uninitiated, to see stores the size of a 7/11, or even a CVS or Walgreen’s, filled with nothing but thousands of roman candles, and the like.

I picked two bags worth, looking forward to lighting them off, at my boyhood home.  Intriguingly, my Dad, a lifetime science fiction fan, an engineer, and a World War II vet, had no time for what he considered such Tom Foolery. It was my mother who happily joined my girlfriend and me, as we lit the variety of delights. And when one rocket errantly dipped into a neighbor’s backyard, they all went running back into the house. (Thankfully, no harm was done, anywhere!)

(And yet, my Dad loved the smell of the smoke bombs I’d sometimes play with, safely, outdoors.  Afterwards, it would be only a matter of moments, before one of us would look at the other, and say, “I love the smell of napalm in the morning. It smells like victory.”)

Just a few weeks earlier, I had seen what still remains one of the amazing sights of my life.  I was flying back to La Guardia Airport in New York on the Fourth of July, after the Chicago Comic Con, when as the plane approached Queens, we were flying above the fireworks. Watching such displays from this new perspective, is extraordinary.

Firework shows at sports stadiums can also well be worth your time. There are great exhibitions where you can tip one’s head back in your seat, and easily pretend that you are somehow immersed in some sudden series of nebula… (Often the shows are provided gratis, as a bonus, after a ballgame.)

Yesterday, I texted some local friends in my new neighborhood of Franklin Square, Long Island, to see if there was a fireworks show nearby.  Everyone said that if I was lucky, there’d be fireworks on my street.

And they were right.

About nine P.M., as I walked out my door, and down the path, there were clusters of meteoric wonder to all corners of the wind, and just a few houses away from me…  There were a variety of holiday colors that simply didn’t exist, once upon a time; in a fiery cascade that couldn’t help but thrill me.

I came back in after a while, to catch some baseball, and write some of these words…  I think I’ll be going back out again,  in just a little while to catch what’s usually a late night encore.

I’m always surprised when some science fiction fans I’ve met are not fond of fireworks.

Was this not, after all, the beginning of the space age?

6 thoughts on “For Tonight, the Fourth”