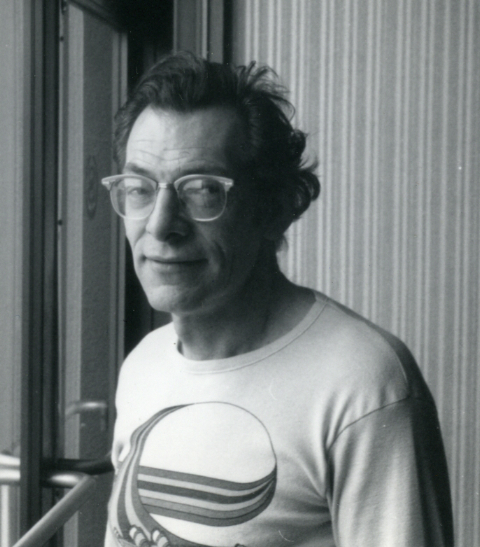 Frank Dietz. Photo by and copyright © Andrew I. Porter.

By Andrew Porter: The death of Franklyn M. Dietz, Jr., — Frank to his many friends — was announced on Facebook on October 22. Dietz, who lived at the end of his life in Marietta, Georgia, participated in many of the major activities of mid-20th century SF fandom. With David A. Kyle and his then wife Belle, in late 1956 he founded the Lunarians, aka the New York Science Fiction Society, which in turn launched Lunacon, a convention that continues to this day. For years, Lunarians met in his Bronx apartment at 1750 Walton Avenue, moving with him and his second wife, Ann — Belle had died — to Oradell, NJ, as the neighborhood around them decayed.

He was chairman of the first 14 Lunacons, and was Fan Guest of Honor at the 2007 Lunacon. His activities as “Station Luna,” an effort to record the proceedings of many World SF Conventions, continued for many years. He recorded events at the 1951 Worldcon in New Orleans. It was there that a loud party in his room was moved to a larger venue: the now legendary Room 770, and the name of a Hugo-winning newszine. He was one of the organizers of the Guild of Science Fiction Recordists, and of the International Science Fiction Correspondence Club in 1949, which promoted correspondence among fans in different countries. Frank recorded events on tape at many other conventions, continuing at least until the 1967 Worldcon in New York City.

He possessed an original tattoo of a mouse on his upper arm, done especially for him by Hannes Bok.

He recorded events at the 1957 Worldcon in London, and while there was inducted into the Order of St. Fantony, which featured, according to Rob Hansen’s website, “an elaborate ceremony staged by the Cheltenham Circle, in full medieval costumes, with real swords, armor, etc. Those who received this signal honor were Walt Willis, Bob Silverberg, Terry Jeeves, Bobbie Wild, Eric Bentcliffe, Ken Slater, Bob Madle, Franklin Dietz and Ellis Mills. We were given the test of the true fan, under threat of the executioner’s axe — a real one — if we failed. It was to drink a glass of water from the well of St Fantony. It looked like water, smelled like water … but it turned out to be 140 proof white Polish liquor.”

Photos of Frank and Belle, and many other legendary figures in SF, at Loncon, are here. 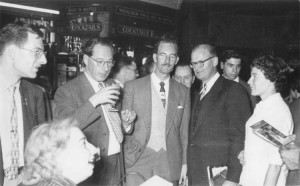 He was involved in a notorious legal battle, with suits and countersuits, over the incorporation of the World SF Society, Inc., which had its genesis in the 1956 Worldcon, and ended at the 1958 Worldcon with a whimper and the bang of Anna Sinclair Moffat’s gavel at that worldcon’s Business Meeting.

In an editorial in the December 1990 issue of Science Fiction Chronicle, I wrote, “Don Wollheim … took me seriously… I must have been 13, maybe 14 at the time; I’d been reading SF for about 4-5 years. ‘What you need is fandom,’ is more or less what Don told me, and more to the point, he told me how I could contact this miraculous community. He gave me the name and phone number of … Frank Dietz, who headed the New York SF Society, the Lunarians… I … fit right in with the Lunarians. My first fannish contact, I dimly remember now, was the Lunarians Christmas party in December, 1960.”

I wrote, then, “Thirty years ago this month.” Now, it’s fifty-three years ago. And I’m finally saying farewell to Frank Dietz.

1 thought on “Frank Dietz Passes Away”