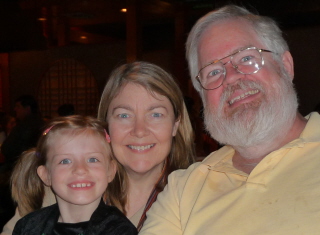 While the rest of the world celebrated December 31 as New Year’s Eve, Diana and I (and Sierra!) celebrated the date as our 14th wedding anniversary. We had dinner at a Japanese steak place where the chef prepares the food in front of you most entertainingly, beginning with a sheet of flame on the griddle (that gets your attention) and later turning a small stack of onion rings into a smoking volcano.

Not too many couples pick this date to get married, I’m sure, it overlaps a holiday and it’s tax planning poison. But in 1994 we were looking to spot our wedding on the first Saturday after College of the Ozarks let out for Christmas vacation so we could make the most of the break as a honeymoon.

Earlier in the day Diana and I had an anniversary bonus after lunching in Claremont. As we walked back to our car, Elst Weinstein, a member of our wedding party, saw us as he drove past and pulled over to say hello.