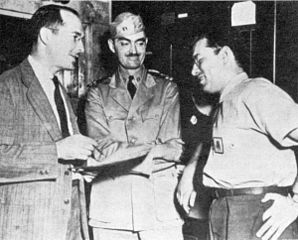 Yesterday the Scientific American blog analyzed The Good Doctor’s predictive powers in a 1964 op-ed for The New York Times where he speculated what the world would look like in 2014.

Asimov had attended the World’s Fair of 1964 and took a rather optimistic view of humanity in spite of looming thermonuclear war. Technology would advance, the human population would prosper, and we would explore the frontiers of sea and space for our benefit.

And experimental fusion-power plant or two will already exist in 2014. (Even today, a small but genuine fusion explosion is demonstrated at frequent intervals in the G.E. exhibit at the 1964 fair.) Large solar-power stations will also be in operation in a number of desert and semi-desert areas — Arizona, the Negev, Kazakhstan. In the more crowded, but cloudy and smoggy areas, solar power will be less practical. An exhibit at the 2014 fair will show models of power stations in space, collecting sunlight by means of huge parabolic focusing devices and radiating the energy thus collected down to earth.