By Hampus Eckerman: File 770 has reported on the Nobel Prize before (with regards to Dylan), so this might be of interest.

First some background. The #metoo is an enormous thing in Sweden now in a way it can’t really be in a larger country. Politicians are forced to resign. TV-personalities. There are groups for collecting information in the church, in the unions, in the healthcare, absolutely everywhere.

A few days ago, the scandal reached the Swedish Academy, the group not only responsible for handing out the Nobel Prize in Literature, but an enormous amount of other prizes. It is absolutely one of the most powerful cultural groups in the country. And now it turns out that the husband of one of the members has been involved not only in abuse and harassment, but also most likely in rapes. And the rapes have taken place in an apartment in Paris, owned by the Swedish Academy. Also, one of the members recommended the harasser for a medal (which the harasser received) and another said he was “a gentleman”. At the same time as he was well-known among the whole cultural elite for who he was since the 80s. In fact, in the 90s, one of the largest Swedish newspaper made long exposé about his harassment. The Swedish Academy did nothing at that time. Neither did any publishers.

The Swedish Academy made the following press release:

Press release from The Swedish Academy

At its meeting this evening, the Swedish Academy has unanimously taken the decision to immediately suspend all contact and all further funding of all activities conducted by the person in the media under the name The Culture Person. This is partly about the support given to the man’s cultural scene (since 2010 it is about SEK 126,000 per year – no payments have been made to him personally) and partly about the assignment he had in charge of the Academy’s apartment in Paris .

This is our first action and it is motivated by two things. On the one hand the examination made by the Swedish newspaper Dagens Nyheter, which we welcome, on the other hand, when it was found during the meeting that members, daughters of members, wives of members and staff at the Academy’s office have all been exposed to unwanted intimacy or inappropriate treatment by the person concerned. These experiences had not come to light without the recent attention to these problems.

Secondly, decisions have also been taken to review the Swedish Academy’s earlier relationship with this man and, in particular, examine whether this has had any influence, directly or indirectly, on the Academy’s award of prizes, scholarships and other funding, as well as investigating whether he has influenced The Academy’s work in general.

The third measure concerns the future. Work should be initiated to ensure that a repetition can not be done, and determine how our routines and working methods can be improved. We have already found that we have violated our own rules against bias and that they must be tightened.

The Swedish Academy wants as much transparency as possible on this issue. More detailed information regarding the economic collaboration, for example, will be reported shortly.

Note that they say that the man’s harassment would not have come to light if there hadn’t been a newspaper article about it, even though their own members had been among those abused(!).

I do think this link might be interesting when judging the impact of the metoo-campaign internationally. As you see, Sweden is in its own league — https://trends.google.com/trends/explore?q=Metoo 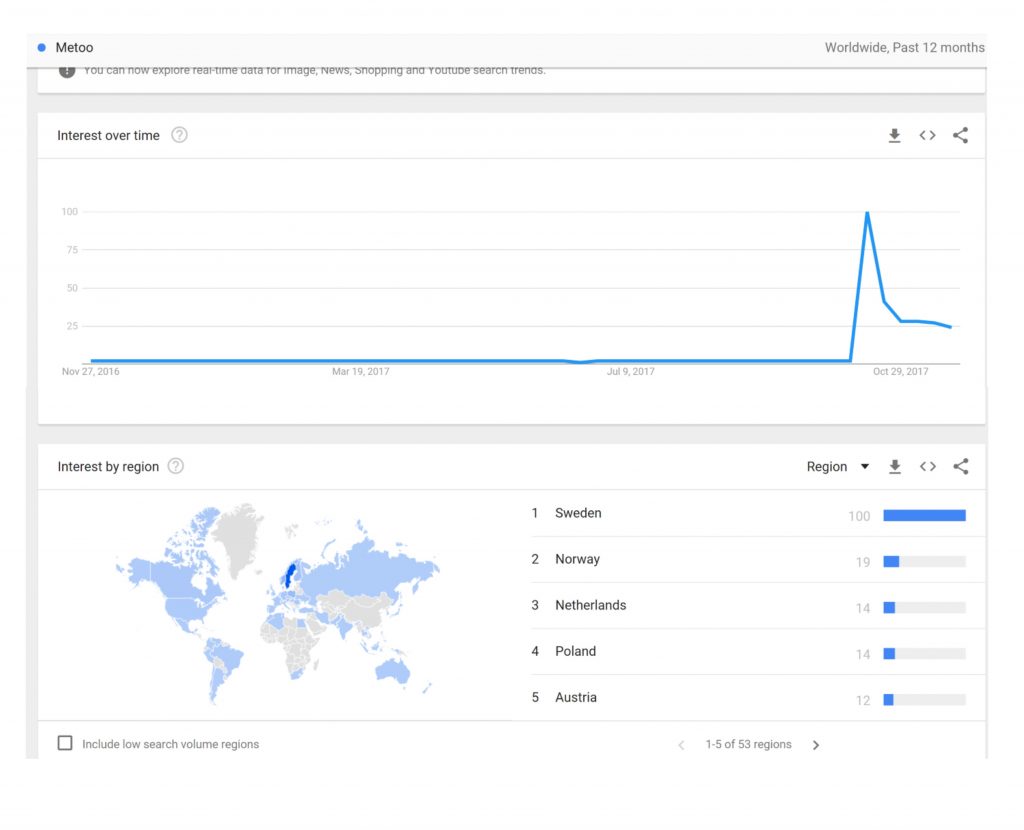