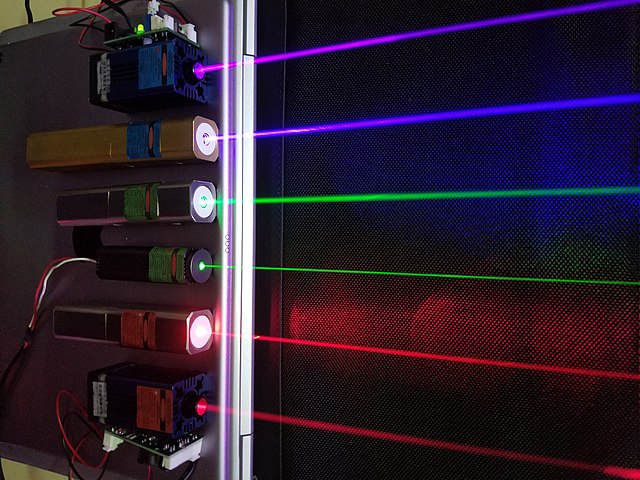 By Jeff Hecht. Author of Lasers, Death Rays, and the Long, Strange Quest for the Ultimate Weapon, (Prometheus Books January 2019):

Pulp science fiction invented a host of directed-energy weapons: heat rays, death rays, blasters, ray guns and disintegrator rays. Lasers joined science-fiction arsenals soon after the Pentagon placed a million-dollar bet on the new idea in 1959. The brand-new Advanced Research Projects Agency was desperate for a defense against Soviet nuclear missiles when Gordon Gould walked in the door with a physically plausible plan to make a laser. Gould’s company got a fat contract, but Gould himself couldn’t get a security clearance to work on the laser. It was Theodore Maiman who launched the laser age when he made the first one in May 1960 at Hughes Research Laboratories in California.

Maiman was dismayed when newspaper headlines heralded his invention as a “science-fiction death ray.” His real-world laser was orders of magnitude short of the power needed to blast Soviet nukes out of the sky. Classified experiments reached tens of kilowatts in the late 1960s by burning chemical fuels in a gigantic flowing-gas system that acted like a rocket engine, but it couldn’t match the power of Star Trek phasers.

In the 1980s, Ronald Reagan’s “Star Wars” program spent billions trying to make orbital laser battle stations, and managed to get a megawatt out of a building-sized laser for a few seconds at a time. But they never got a big laser off the ground. After the end of the Cold War, the Air Force crammed a rocket-engine laser into a Boeing 747, which got off the ground and bagged a few targets in 2010. But it was billions over budget and many years behind schedule, and was scrapped as useless for zapping nuclear missiles fired by rogue states.

However, tests of a smaller rocket-engine laser on the ground in the late 1990s held out a different hope. A joint U.S.-Israeli project called the Tactical High Energy Laser (THEL) could shoot down terrorist rockets before they could wreak havoc. The powers were only a few hundred kilowatts, but the targets were only in the kilometer range, not the thousands of kilometers needed to stop long-range nuclear missiles. Contractors planned how to repackage the five trailers of equipment used in THEL into a mobile rocket-blaster that could be driven to trouble spots. It seemed like a done deal until field operations experts took a look at the plans around 2000.

Logistics is crucial on the battlefield. Napoleon Bonaparte famously said “an army marches on its stomach,” but modern armies also need fuel and munitions. A laser is an appealing weapon because it fires bolts of energy, not expensive missiles that can run out in mid-battle. But chemically powered lasers need two fuels, one containing hydrogen and the other containing fluorine, and they produce highly toxic hydrogen fluoride. The field ops team gave them a thumbs down, but said they would be happy to have a laser that could run on electrical power from generators powered by the diesel fuel that is the ubiquitous source of energy on the battlefield.

Solid-state lasers that ran on electricity had come a long way in the forty years since Maiman made the first one. Some were used in cutting and welding, but their power was far short of the hundred kilowatt level needed to zap insurgent rockets. Yet Congress and the Pentagon could see their benefits, and in 2000 they created the High Energy Laser Joint Technology Office (HEL-JTO) with a mandate to build bigger and more powerful electric-powered lasers.

They planned to crank up the power in two steps to a laser producing the full hundred kilowatts for five solid minutes. Right on schedule, Northrop Grumman announced success. “We’re doing our part to make gunpowder a twentieth-century technology,” said Dan Wildt, head of the company’s laser weapon program, on a March 18, 2009 press teleconference. The laser reached 105 kilowatts, a shade above the desired output power, but its efficiency was a shade below the desired 20 percent. It was an impressive achievement. However, the laser weighed seven tons and filled a shiny metal box 2 by 2 by 2.7 meters, smaller than a 747, but too hefty and fragile for use on the battlefield. It also required banks of laboratory chillers because it generated over 400 kilowatts of heat as well as the 100 kilowatts of laser beam. So JTO pushed on toward more battle-ready lasers.

Meanwhile, industrial laser companies had made a breakthrough of their own by replacing old-fashioned laser rods and slabs with thin optical fibers loaded with light-emitting atoms. Fiber laser output powers had soared from around 100 watts in 2000 to tens of kilowatts in 2009. They were so powerful that military labs started buying welding lasers, bolting them onto battlefield vehicles, and adding beam-focusing optics and a joystick-based control stick for aiming the laser. Then they started firing.

The easiest targets were improvised explosive devices (IEDs) or unexploded munitions laying on around on a battleground. The drill was simple. Park the vehicle a couple hundred meters away, far enough that the shrapnel wouldn’t hurt anybody. Then turn on the laser and point the beam onto it. The infrared laser beam was invisible to the eye, but infrared viewers revealed it on the screen so the operator could point the beam. When the target was exposed on the surface, after a matter of seconds the explosive inside the shell would detonate with a satisfying BANG, and the driver could move along to the next target. That could be useful for clearing battlefields, although it was harder to deliver enough laser energy to explode well-buried land mines and IEDs.

The next step was moving targets. The Army Space and Missile Defense Command in Huntsville installed a five-kilowatt laser atop in a tank-like Stryker in place of the usual heavy gun. It zapped over 150 drones of various sizes before Boeing replaced it with a 10-kilowatt laser. The Navy targeted small boats. A video of one early test showed a boat with a large red outboard motor bobbing quietly on shallow water. Nothing seemed to happen as an invisible infrared laser beam from elsewhere locked onto the motor, but as the beam dwelled on the motor, it began igniting wisps of gasoline fumes, and the motor eventually went up in flames.

The Navy was the first service to officially “deploy” a laser weapon, installed on the aging warship the USS Ponce in 2014 before it went on duty the Persian Gulf. They bought five 5.5-kilowatt industrial lasers from IPG Photonics, the world’s biggest maker of fiber lasers, and hooked them up to a beam-focusing telescope. The laser wasn’t used in combat, but it did zap test drones and small boats, with impressive success. 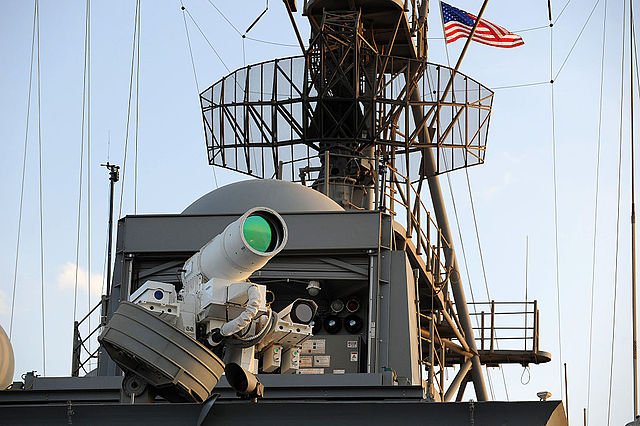 Tests are continuing with more powerful lasers taking on more difficult targets. The Army installed a 60-kilowatt state-of-the-art fiber laser from Lockheed Martin in the High-Energy Laser Mobile Demonstrator, a standard military battlefield truck that Boeing has equipped with laser focusing optics and a command and control systems for use by soldiers.

The Navy is buying a pair of similar Lockheed advanced fiber lasers for a new system it calls HELIOS, for High Energy Laser and Integrated Optical-dazzler with Surveillance. In addition to zapping unfriendly small boats and drones, HELIOS will use its optical system to gather intelligence on its environment. It also will include a lower-power visible laser as the equivalent of the “stun” setting on a Star Trek phaser; it will shine so brightly that enemy troops won’t be able to look at it, making it hard for them to attack. One HELIOS will be sent to the Navy by 2020 for integration with the electrical and control systems of a new destroyer. The other will undergo extensive tests at the White Sands Missile Range in New Mexico. 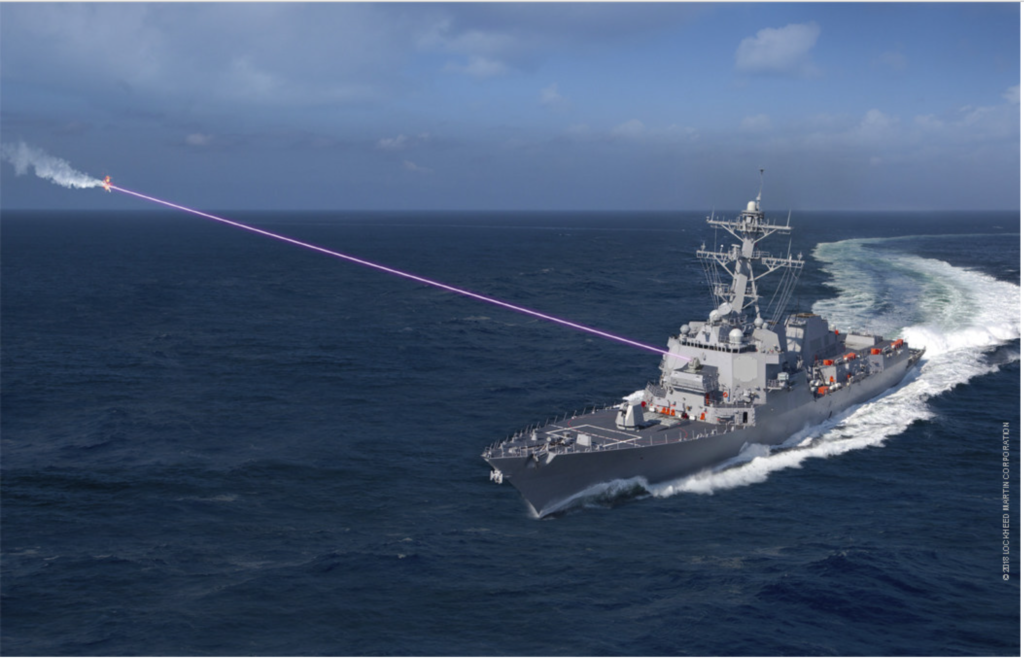 The Air Force wants lasers for its top-gun fighter pilots, so it’s developing a laser weapon called SHiELD (for Self-protect High-Energy Laser Demonstrator). A cutting-edge Lockheed fiber laser will be mounted in a pod attached to fighter jets to defend against ground-to-air and air-to-air weapons. Initial tests are to start by 2021.

Meanwhile, tests are continuing on a radically different laser design called HELLADS, developed by General Atomic. One big attraction is a remarkably compact and light-weight structure made possible by cooling the laser solid with a flowing liquid with optical properties that match those of the solid so well that it doesn’t disturb the laser beam at all. Another attraction is a modular structure that can double the power by adding a second module, and potentially scale to much higher powers by adding more modules.

After decades of disappointment, this time looks different. Lasers that are more compact, more efficient and more powerful are only part of the story. It’s also focusing on targets that are much closer, so the beam has to go through less air, which isn’t as clear as we think. Look across a sunny blacktop parking lot at mid-day and you can see how air currents can bend light back and forth. Another difference is that drones and short-range rockets are much more vulnerable to laser attack than ballistic missiles hardened for re-entry into the atmosphere.

Nobody’s talking ray guns or phasers yet. A hand-held laser can’t pack lethal energy, although one could burn a blind spot on your retina. Think of these lasers as defensive artillery that can pinpoint enemy rockets, shells, drones and small boats.

Don’t expect these laser weapons to be standard combat equipment next year. The new generation of tests are needed to evaluate the lasers strengths and weaknesses, and to assess their lethality on real-world targets. If lasers pass those tests, they must be ruggedized to withstand battlefield conditions, which are far more harsh than a well-run factory floor. Then they must run a bureaucratic gauntlet to gain approval to move beyond research and development and become a “program of record” that spends buckets of money to produce hardware. That’s a real-world challenge Buck Rogers never had to face.

11 thoughts on “How Laser Weapons Stopped Being Science Fiction”