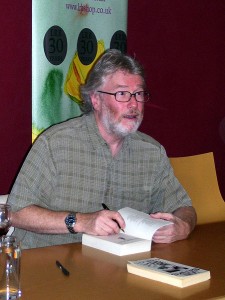 Iain Banks, who had been in the late stages of gall bladder cancer, died June 9. His wife, Adele, told Banksophilia, “Iain died in the early hours this morning. His death was calm and without pain.”

Banks announced in April he had only a few months to live. Following his diagnosis he withdrew from all planned public engagements and married his long-term partner Adele Hartley.It was his second marriage.

The Scottish author wrote 15 mainstream novels and a dozen sf novels, nine of them in The Culture series. Mainstream readers knew him best for his novels The Wasp Factory, The Crow Road and Complicity. He was named one of the 50 greatest British writers since 1945 in a 2008 poll. He loved writing both genre and non-genre work, and if anybody thought one was subordinate to the other, he set them straight in a post for Banksophilia:

Until the last few years or so, when the SF novels started to achieve something approaching parity in sales, the mainstream always out-sold the SF – on average, if my memory isn’t letting me down, by a ratio of about three or four to one. I think a lot of people have assumed that the SF was the trashy but high-selling stuff I had to churn out in order to keep a roof over my head while I wrote the important, serious, non-genre literary novels. Never been the case, and I can’t imagine that I’d have lied about this sort of thing, least of all as some sort of joke. The SF novels have always mattered deeply to me – the Culture series in particular – and while it might not be what people want to hear (academics especially), the mainstream subsidised the SF, not the other way round. And… rant over.

In hindsight it seems bizarre that he never won either of the top SF awards. He received just a single Hugo nomination, for The Algebraist, a non-Culture novel, and was never nominated for a Nebula. Of course I say this with the zeal of a recent convert. For years I’d listened to fans like Kathryn Daugherty praise his writing but never sampled it myself until he was named one of the 2014 Worldcon guests of honor. Purely a case of so many books, so little time.

Collectively, the Culture novels are one of the great epics of space opera. But as the saying goes, science fiction is never about the future, it is always about the present. I felt that Banks made the Culture a hagiography of his most-admired contemporary attitudes and beliefs. He told The Guardian in 2007:

The point about the Culture… who are the most advanced civilisation in my books, is that they alter their genertic inheritance to make themselves sane and not genocidal, as we often seem to be. They also create machines so intelligent that they can save us from ourselves. We have a lot to learn from them. I wish, given what a miserable bunch of murdering bastards we are much of the time, we were more like them.

After announcing his illness in April, Banks asked his publishers to bring forward the release of his latest novel, The Quarry, so he could see it on the shelves. The book will be released on June 20. Last weekend it was revealed the story details the physical and emotional strain of cancer – a coincidence, because Banks had nearly finished the book before discovering he had the disease.