By Oskari Rantala: First off: Congratulations, Mike! 40 years is an awfully long time. File 770 was there before I was even born and I guess it had been around for almost 15 years until I learned to read — probably a year or two more until I happened to read any SFF. Now, 25 years later, I’m a regular reader but an extremely lazy commenter. So, paljon onnea to Mike and File 770, and a heartfelt morjens to all the nice people I met at the Filer meet-up in Worldcon75!

The blog has its tenth anniversary, so I thought I might write to you about an obscure (for a non-Finnish audience, at least) work of SF which just turned ten last year as well. That is the science fiction concept album Talvikuningas (“Winter King”) by the Finnish rock band CMX.

CMX is one of the longest-running and most successful Finnish rock bands that are still in business. Not quite as old as File 770, obviously, but they too had existed for some time before I learned to read, and for any Finnish person about my age they have been there forever.

Originally, they played (or “played”) hermetic hardcore punk but later moved on to occult-flavored rock and cheesy (if somewhat haunting) ballads. When singer A.W. Yrjänä included the word “juna” (“a train”) in the song Todellisuuksien yleiset luokat I-IV (“General Typology of Realities I-IV”) for album Aurinko (“Sun”, 1992), some fans were shocked and thought that the band had finally become a sell-out.

Well, hermetic hardcore punks are a tough crowd to please, but the band has indeed become as commercially successful as you can become in a small country doing non-English music. Its later career has been a fusion of more occult-flavored rock and cheesy, haunting ballads with some metal influences here and there — that’s only appropriate in a country with most metal bands per capita. In 2007 they had published 11 studio albums, with seven making it to the top 3 of the Finnish album chart.

At that point, CMX, consisting of singer-bassist-songwriter A.W. Yrjänä, guitarists Janne Halmkrona and Timo Rasio, and the drummer Tuomas Peippo, published Talvikuningas. It is a strange concept album, based on a space opera novel Yrjänä was writing at the time but which he never got around to finishing (or at least publishing).

It’s certainly one of the weirdest albums that a Finnish rock band with a mainstream appeal has ever produced, with songs about space battles, killer satellites, Praetorian cyborgs, EMP weapons, and a galactic emperor who is sitting in his throne room on a planet under siege, waiting for his final defeat.

Each song delivers fragments of the saga of the Winter King, with the text supposedly lifted from various sources, such as ancient codexes, the propaganda transmissions the king used to recruit his army of cyborg soldiers and so on. They don’t really form a coherent narrative and it is left for the reader to make sense of the storyline.

The gist of it is that the soldiers of the king’s elite army become disillusioned with the senseless galactic war, and one of them, after being shot by an EMP weapon and left in a coma for a long time, meets a female sage and together they come up with a plan to gather an army of their own in order to take the king down and put an end to war. It is a bit more complicated and the threads can be put together in many ways, but that’s the central idea.

The album booklet is gorgeously illustrated by Sami Saramäki, with one full-page illustration in the booklet per song. (Saramäki has done a lot of cover illustrations for SFF novels and you can check out his work here — cool stuff on Finnish books as well as with Douglas Adams, Diana Wynne Jones etc.) Here’s the illustration for the song Punainen komentaja. 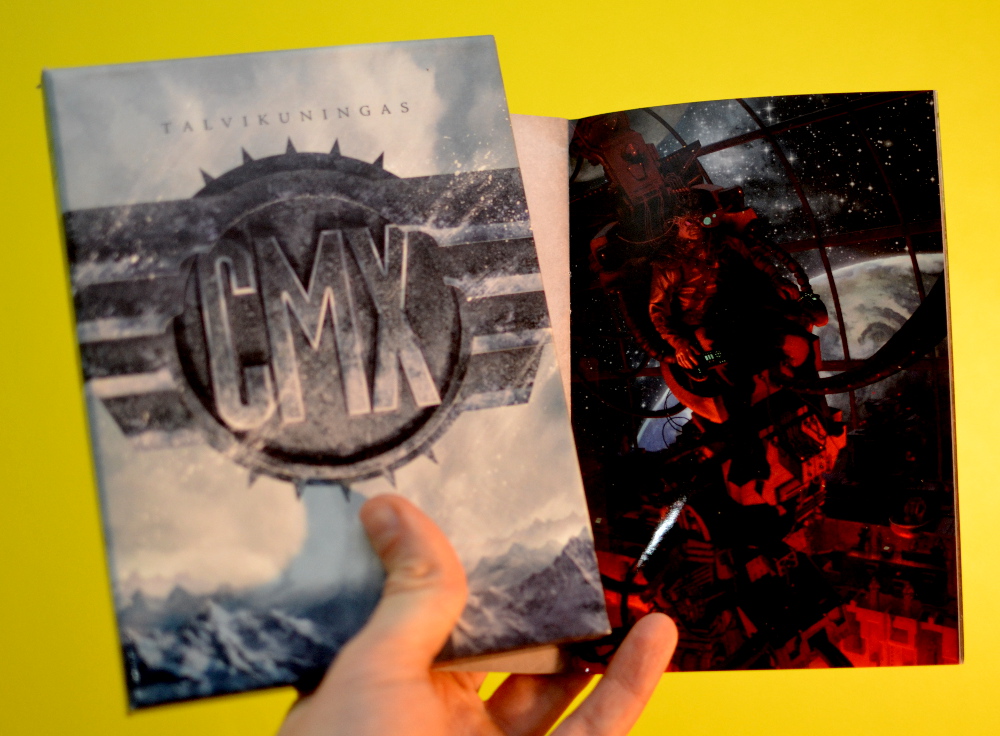 The visual style is a little bit different in the animated music video of the song Punainen komentaja (“Red Commander”), the only video produced from Talvikuningas, but it is still worth watching. Directed by Samppa and Janne Kukkonen, it offers a visual rendition of some aspects of the album’s story.

You can watch the video below and check the lyrics below that. Under each line, I’ve added an approximate translation to give an idea of what it says in order to help those who don’t read our great agglutinative language.

On laivamme pimeydestä tehty
(Our ship is made of darkness)

Joskus pelkokin meitä kavahtaa
(Sometimes even fear is frightened of us)

Ten years later, CMX is still doing their thing — as is File 770 — even though they have had to recruit a new drummer (the old one became a dentist), and I think their next album is coming out in a couple of months. The track listing doesn’t sound very science fictional, but in the meantime, A.W. Yrjänä has published a fantasy adventure novel Joonaanmäen valaat (“The Whales of Joonaanmäki” or perhaps “The Whales of the Hill of Jonah”) and Janne Kukkonen, other one of the directors of the music video, has produced a fantasy comic album Voro (“Thief”) which won the Sarjakuva-Finlandia prize for best graphic novel published in Finland last year.

So, several of the people connected to this project are important creators in the Finnish SFF scene in many ways, and I was happy to guest blog about them here. I hope this was of interest to some of you out there!

[Oskari Rantala is a Finnish SFF fan writing his PhD on comics studies. Occasionally, he writes short fiction and helps run conventions in his home city of Jyväskylä — “Welcome to Finncon 2019, everybody!”]