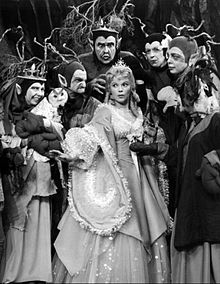 I am interested to see File 770 is not the only sf/fantasy news outlet to pass on reporting Shirley Temple Black’s death this week. As of this writing, Locus, Ansible and SF Site News have had nothing to say about it either.

I wonder what readers of SF Site News and File 770, in particular, think about this omission? Our two sites habitually jump to report the passing of far more obscure Hollywood types who once worked on a $200,000 horror movie or had bit parts in genre TV shows.

Shirley Temple movies were rich in fantasy in the psychological sense, some even had dream scenes and exotic costumes, but they didn’t contain fantasy elements like witches, wizards, dwarves, supernatural magic and the like. Her studio refused to loan out the child actress to make The Wizard of Oz. She never made a signature fantasy film of her own.

However, as an adult she hosted Shirley Temple’s Storybook (1958-1961), and Random House published four collections of fairy stories branded with her name. I watched those shows as a kid! And when did I ever need any more excuse than that to mention someone?

I confess there’s no rocket science involved in File 770’s editorial decisions about whose obituaries are run.