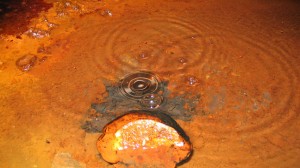 I’ve seen so many advertisements for a brand of bottled spring water which owes its purity to having percolated through underground mountain reservoirs since the last Ice Age that I couldn’t believe an announcement about scientists finding billion-year-old water came with the warning: “Don’t drink it.”

Canadian and British scientists say water found 2.4 kilometers below the surface in a northern Ontario copper and zinc mine has been trapped there for 1.5 billion to 2.64 billion years. It is rich in dissolved gases such as hydrogen and methane that could theoretically provide support for microbial life.

Microbes that have been isolated for tens of millions of years have been found in water with similar chemistry at even slightly deeper depths below the surface in a South African gold mine, using hydrogen gas as an energy source, the researchers noted.

Doubtless the stuff would have given Tyrannosaurus Rex the runs if he could have reached it.

The age of water is measured by an analysis of the xenon gas dissolved in it. Like many other elements, xenon comes in forms with different masses, known as isotopes. The water in the Ontario mine contained an unusually high level of lighter isotopes of xenon that are thought to have come from the Earth’s atmosphere at the time it became trapped.