By Carl Slaughter: Jennifer Brozek is a busy person.  Writing stories, attending conventions, volunteering for professional writing associations.  Oh, and wading through flood waters.  All of this while managing a small press.  Catch up with her at StokerCon on April 27, CryptiCon and the Nebulas in May, and GenCon in August.

Carl Slaughter:  How did you get into anthology editing?

Jennifer Brozek:  It wasn’t something I decided on specifically. I never thought, “I want to edit an anthology now.”  My first anthology, Grants Pass, was simply a project I wanted to do that happened to be anthology and I needed to be the editor of it. I went into the project blind and learned a lot along the way. After doing the first one, I got bit by the bug of what an anthology is and could be. I got hooked. I enjoy creating something that is more than the sum of its parts—which is what an anthology is. 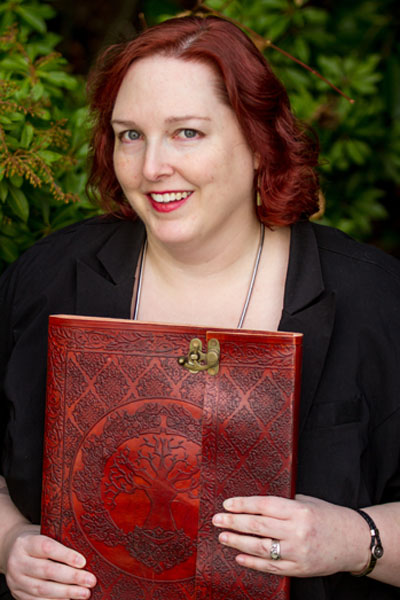 CS:  What type of anthologies do you edit?

JB:  Mostly I do dark speculative fiction and science fiction. Occasionally, I will do non-fiction, but my love is with the supernatural dark and scary.

CS:  What authors have your worked with?  Give us some examples of your experience with authors.

JB:  I’ve been so fortunate. I’ve worked with some of my childhood heroes like Mercedes Lackey, Larry Dixon, Glen Cook, Mike Resnick, and Jody Lynn Nye. I’ve also worked with some top writers in the field like Seanan McGuire, Jonathan Maberry, Jay Lake, Lucy A. Snyder, and Laird Barron.

The thing I’ve noticed—by and large—the more experienced the author, the easier they are to work with. They understand when writing for themed anthologies, the editor has something specific in mind, and don’t resent revision requests. They understand what is needed in a professional sense.

CS:  Who’s lined up for Maximum Velocity and what are some of the plotlines?

JB: Maximum Velocity is a reprint anthology where we’ve taken the best set of stories from the Full-Throttle Space Tales anthologies and put them in one book. Each editor got to pick their favorite stories. Authors include Dayton Ward, Shannon Page, Mike Resnick, and Jean Johnson. Plotlines include refugees making the best of their terrible situation, clones being abandoned to the vagaries of a hostile society, and a lonely ship captain dealing with a mysterious stowaway. 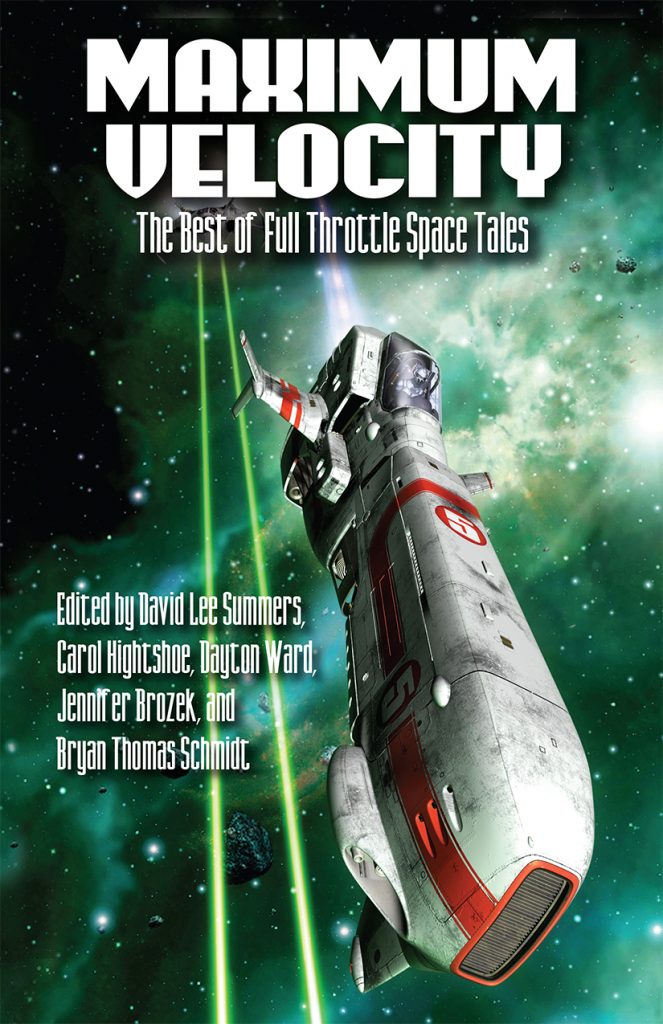 CS:  How did you get into science fiction/horror?

JB:  Blame it on my mom. She always has books around. Going to the library was a treat. I read voraciously as a child. Herbert, Heinlein, Cooper, Asimov, Perry, Koontz, King, Kress… all of them were available for me to read. If I didn’t understand something, I tended to ignore it and get on with the story. Probably why I wasn’t scarred by some of Heinlein’s more adult themes I shouldn’t have been reading at such a young age.

CS:  Do you write the same type of stories that you select for anthologies?

JB:  Not exactly. Every story in an anthology needs to match with every other story. I have to love the story and to keep thinking about it long after I’ve read it. The stories I write tend to be inspired by something that interests me. So, in that regard, they are the same. But, overall, I select the stories that match the anthology and I write the stories I want to read.

CS:  How did you get into RPGs, what type of RPGs have you been involved in, and what exactly is your role?

JB:  I’ve been playing table-top and LARP RPGs since the 1990s. I started writing for table-top RPGs in 2004, then videogames / MMOs in 2010. I wrote everything from the fluff to the crunch. Background, stats, world building, history. Whatever was needed. These days, I mostly write tie-in fiction for RPGs. This means I write a story/novella/novel that matches the theme, tone, history, and genre of the RPG while expanding it in a way to enhance the RPG experience for those who play and to draw in new fans for those who don’t.

CS:  I’ve never played an RPG, so I’m curious, how much of a storytelling element is involved, and what’s the speculative fiction crossover appeal for players as well as developers?

JB: It all depends on the games you play. Some of them are tightly controlled by the gamemaster. They lead the players through the story. Some of them are cooperatively run and told by every player in the game. The appeal is another way to learn how stories are built, told, and consumed. Game writers tend to know a LOT about the world they are writing in — original or tie-in — whether or not it comes into play in the story. Gaming teaches the writer what the player/reader finds important. It helps the writer learn what to highlight versus what to hint at. It also teaches them how to write in a way that makes the story feel bigger than it is and that it exists in a fully-formed universe.

CS:  What do you do at Apocalyptic Ink Productions?

JB:  As the Creative Director I read slush, accept/reject novels/novellas, manage the publication schedule, commission cover art, edit everything, hire proofers, proof everything, manage PR (or hire someone to do that) and generally be the face of the company. All the business stuff (contracts, royalties, formatting books, etc) goes to my husband. We’ve been doing this for five years now. Of course, when we go to conventions, we sell our books and talk with prospective authors.

JB:  Dark… I tend to think of the horror I write as extraordinary supernatural events happening to ordinary people who then have to deal with it in one way or another. Sometimes they succeed. Sometimes they don’t.

CS:  Is a typical apocalyptic story a individual nightmare scenario or a fate of the world scenario?

JB:  For me, I bring the story in small. The apocalypse may be happening to the entire world, but I focus in on individual people and their personal struggles. I think that makes the sense of horror, fear, and doom more effective, more relatable. They say one death is a tragedy while a million deaths is a statistic.

CS:  What exactly does a Director-at-Large do for the SFWA?

JB:  Being on the board of SFWA is a job that involves a lot of details, paperwork, research, and forward thinking. We are always trying to make the organization better for our members as well as for all writers. Each director takes on specific projects and shepherds them through completion. For example, the SFWA Speaker’s Bureau.

CS:  What happened at the Rainforest Writing Retreat?

JB:  The Rainforest Writers Retreat is one that is held on the Olympic Peninsula of Washington State. It’s run by Patrick Swenson of Fairwood Press. Every year, the weather by Lake Quinalt is a mixed bag of sun, rain, or snow. I’ve seen it all. This year, the lake flooded and cut off a couple of the cabins from the rest of the resort. Author J.A. Pitts was in the other cabin that got cut off. Undaunted, we moved my car out of the flood zone and I asked the resort owners if they had any waders I could borrow. They did indeed. I spent a good portion of the retreat wading to and fro from cabin to food and presentations.

CS: What can we expect at Crypticon Seattle?

JB:  For Crypticon Seattle, I’m only a dealer in the dealers room this year. I suspect with George Romero as one of the GoHs, there will be a LOT of zombie fans. This is good. Because I’ll have my Bram Stoker nominated YA zombie novel, The Last Days of Salton Academy, on hand.

CS:  What can we expect at StokerCon?

JB:  Not much other than me being a nervous wreck. I’m flying in for the Bram Stoker Awards banquet and ceremony where I will win or lose the award (I’m up against some stiff competition). I’ll probably spend some time with my agent to talk about the new series. I’m not sure what else will happen.

CS:  What can we expect at Gen Con?

JB:  I’m part of Authors Avenue in the Gen Con where Apocalypse Ink Productions will be releasing Famished: The Gentlemen Ghouls omnibus by Ivan Ewert and the Cross Cutting trilogy omnibus by Wendy Hammer. Both are fantastic books with never before published stories in both universes.

Otherwise, I’ll be attending panels, parties, and generally having a good time. It’s Gen Con’s 50th anniversary. If I’m lucky, the secret project I’ve just finished working on will have copies of the book there. Still can’t say what it is, yet. Soon, I hope. This is a good convention for people to come say hello to me.

CS:  Who are you rooting for at the Nebulas?

JB:  Not going to make this easy, are you? There was so much good work on the ballot that it is hard to choose.

Novella: Every Heart a Doorway, Seanan McGuire has my heart.

Novelette: I literally listed all but one in my favorites. I don’t know.

Short story: I’m going to go with either “A Fist of Permutations in Lightning and Wildflowers”, Alyssa Wong or “Welcome to the Medical Clinic at the Interplanetary Relay Station?Hours Since the Last Patient Death: 0”, Caroline M. Yoachim.

Bradbury: Arrival and Rogue One. Both were so good in different ways.

Norton: It’s a tossup. I have no favorites in this category.

CS:  What’s on the horizon for Jennifer Brozek?

JB:  On the original writing front, I’m working on a brand new YA suspense/horror series called Fever County. I’m about halfway through the first book.  I’ve also just turned in a tie-in story that should be out at the end of the year. Forthcoming, I have a new tie-in novella due out in the latter half of 2017 and a Shadowrun novel called Makeda Red due to come out in 2018.  There’s always more coming up. Best to look at my bibliography.

On the editing front, I’m editing an anthology based on Jeff’s Sturgeon’s Last Cities of Earth artwork. I’m also co-editing the Architects of Wonder anthology, SFWA’s celebration of the first 50 years of the Nebula Award short story winners.

Jennifer Brozek is a Hugo Award nominated editor and a Bram Stoker nominated author. Winner of the Australian Shadows Award for best edited publication, Jennifer has edited fifteen anthologies with more on the way, including the acclaimed Chicks Dig Gaming and Shattered Shields anthologies. Author of Apocalypse Girl Dreaming, Industry Talk, the Karen Wilson Chronicles, and the acclaimed Melissa Allen series, she has more than seventy published short stories, and is the Creative Director of Apocalypse Ink Productions.

Jennifer is a freelance author for numerous RPG companies. Winner of the Scribe, Origins, and ENnie awards, her contributions to RPG sourcebooks include Dragonlance, Colonial Gothic, Shadowrun, Serenity, Savage Worlds, and White Wolf SAS. Jennifer is the author of the award winning YA Battletech novel, The Nellus Academy Incident, and Shadowrun novella, Doc Wagon 19. She has also written for the AAA MMO, Aion, and the award winning videogame, Shadowrun Returns.

When she is not writing her heart out, she is gallivanting around the Pacific Northwest in its wonderfully mercurial weather. Jennifer is an active member of SFWA, HWA, and IAMTW. Read more about her at www.jenniferbrozek.com or follow her on Twitter at @JenniferBrozek.