Brad Meltzer’s new novel The Book of Lies claims to find the true origin of Superman in the 1932 death of Jerry Siegel’s father in . The author outlined his case to Douglas Colton in USA Today:

“In 50 years of interviews, Jerry Siegel never once mentioned that his father died in a robbery,” says Brad Meltzer, a best-selling author whose novel, The Book of Lies, due Sept. 2, links the Siegel murder to a biblical conspiracy plot.

Michel Siegel died after a robbery, reportedly from a heart attack, though Meltzer writes he actually died of gunshots.

“[Think] about it,” Meltzer says. “Your father dies in a robbery, and you invent a bulletproof man who becomes the world’s greatest hero. I’m sorry, but there’s a story there.”

Either a story, answers Oregon columnist Steve Duin, “Or a book to sell.” Duin accuses Meltzer of pretending to break new ground on an angle that’s been previously explored by Gerard Jones (Men of Tomorrow) and Noblemen (Boys of Steel: The Creators of Superman).

Jerry Siegel also never connected his father’s death to Superman before he himself died in 1996. And his widow Joanne, doesn’t think the robbery made Siegel or his co-creating friend Joe Shuster invent Superman to fight such crimes.
In that period — the night of — police were called to his father’s second-hand clothing store at According to the police report, three men came into the shop and walked out with a suit without paying.
Michel Siegel, 59, collapsed in the store and died.
“At no time were any blows struck or any weapons used,” the report states.
The death certificate says Siegel had chronic myocarditis and died of heart failure. It reports no bullet wounds.
Marlene Goodman and Irving Siegel, both cousins of Jerry Siegel, said most family members knew the truth, but some thought Michel was shot.

Whether Meltzer’s version is right or wrong, in helping create the superhero Siegel undoubtedly drew on many things — perhaps even the reign of The Untouchables’ Eliot Ness as Director of Public Safety in Cleveland during the mid-1930s, when he clamped down on gangsters while running both the police and fire departments.

Below (from USA Today): Artist Joe Shuster, artist Neal Adams, writer Jerry Siegel and Jerry Robinson, who invented The Joker in 1939, celebrate Siegel and Shuster’s agreement in 1975 with Time Warner 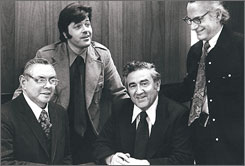 1 thought on “Kryptonite or Horse Hockey?”