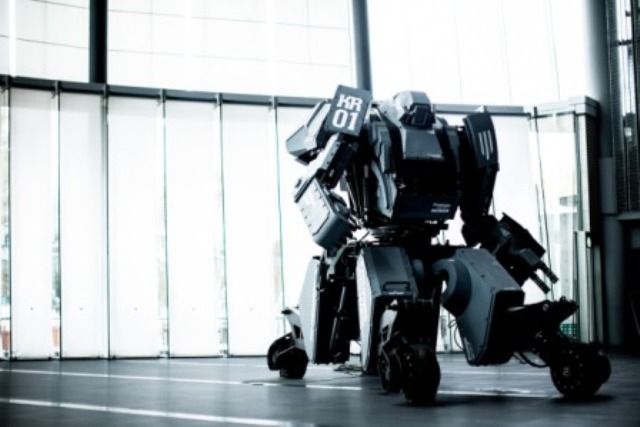 Suidobashijuko Heavy Industries has been selling Kuratas for a few years, however, I just discovered them the other day. As we say at File 770 – it’s always news to somebody.

The demo video is pure hilarity, with a perky model happy as can be piloting a deadly robot around the neighborhood, observing the plastic rocket launcher, and menacing another employee with the BB Gating gun.

Still undecided? Consumer advice about the Kuratas is available from Rocket News 24:

Some of you may feel uneasy dealing directly with the company, seeing as how giant robots are just as likely to be built by mad scientists as brilliant ones. Thankfully, the KURATAS is also sold by a reputable middleman, Amazon Japan.

…Even when ordering huge robots, though, it’s important to read the small print. The item offered through Amazon is a KURATAS starter kit, and as such, does not include the pair of arms the robot is sometimes photographed with.

…Nor does the starter kit come with the plastic rocker launcher or BB Gatling gun, which are collectively referred to in the above video as the robot’s “greatest feature.”

After reading that review, and the warning that the starter kit lacks the cool peripherals, I decided what the buyer gets is a lot closer to a riding lawnmower than a Transformer.

Fortunately, it’s free to look at the Amazon Japan product page (an especially good thing, since it’s only in Japanese.)

3 thoughts on “Kuratas Robots For Sale”