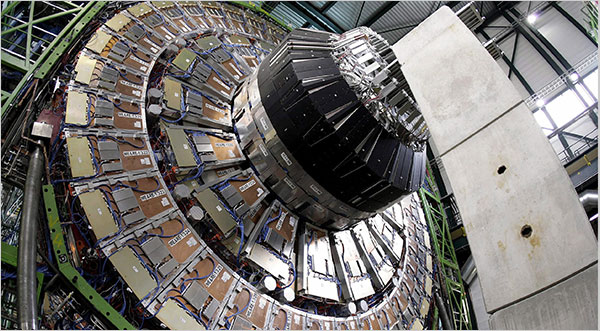 Electromagnet in the Large Hadron Collider

“More than a year after an explosion of sparks, soot and frigid helium shut it down,” begins Dennis Overbye’s New York Times essay, “the world’s biggest and most expensive physics experiment, known as the Large Hadron Collider, is poised to start up again…”

But not without incident. Eweek reported on December 3 there have been thorns among the roses:

The problem-plagued Large Hadron Collider (LHC), which has suffered a series of setbacks and mechanical breakdowns, is reportedly back in operational mode after suffering a power failure [on December 2] due to a blown 18 kilovolt power connection….

(A spokeswoman told Eweek there was also an incident in November when power loss was triggered by something dropped by a bird.)

While there have been setbacks, CERN scientists have had much to celebrate: Last week, the LHC set a world record by becoming the world’s highest energy particle accelerator, having accelerated its twin beams of protons to an energy of 1.18 teraelectronvolts (TeV). The speed exceeded the previous world record of 0.98 TeV, which had been held by the U.S. Fermi National Accelerator Laboratory’s Tevatron collider since 2001.

The writer for the Times is looking forward to when the collider can run its full slate of experiments:

Then it will be time to test one of the most bizarre and revolutionary theories in science…  I’m talking about the notion that the troubled collider is being sabotaged by its own future. A pair of otherwise distinguished physicists have suggested that the hypothesized Higgs boson, which physicists hope to produce with the collider, might be so abhorrent to nature that its creation would ripple backward through time and stop the collider before it could make one, like a time traveler who goes back in time to kill his grandfather.

Is this idea whack? Opinion is divided. Overbye is reminded of a famous quote from an earlier scientific debate about quantum theory:

As Niels Bohr… once told a colleague: “We are all agreed that your theory is crazy. The question that divides us is whether it is crazy enough to have a chance of being correct.”