The first meeting in the Los Angeles Science Fantasy Society’s new clubhouse is tonight, September 1, at 8 p.m. I plan to be there.

The new place is at 6012 Tyrone Ave., Van Nuys, CA 91401, one block north of Oxnard and one block east of Van Nuys Blvd. That’s not very far from where I formerly lived on Woodman Ave., a return address familiar to some of you long-time File 770 subscribers.

The LASFS ended a 34-year run at the old clubhouse last Thursday night. Taral Wayne happened to be in town and Marc Schirmeister took him to the meeting. Taral documented the evening with a few photos.

Before the club bought the property in 1977 it was owned by a leatherworking business. There also was a radio mast beside the back building serving a nurses’ beeper alert service. It was an attractive nuisance — Frank Gasperik once climbed it – so the club eventually took it down.

The front building was used for socializing and to house the library.

The back building was the meeting room, shown in the photos below. Looking at them brings back memories. You can see the paneling Jerry Pournelle helped install, and the free carpet that Gary Louie salvaged from his employer. The column supporting the roof beam used to be covered with plaques honoring two members who qualified as Pillars of the LASFS, Bruce Pelz and Michael Mason.

When LASFS bought its first clubhouse in 1973, over 100 people came to the first meeting. The club grew so quickly that members were able to buy a larger place in 1977. For many years weekly attendance averaged around 150, though it has since dwindled. 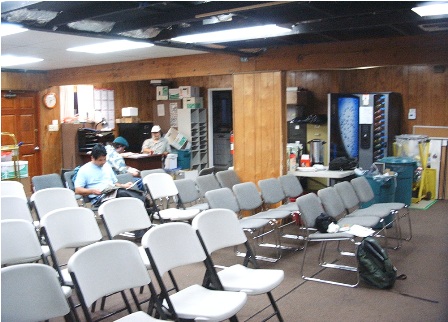 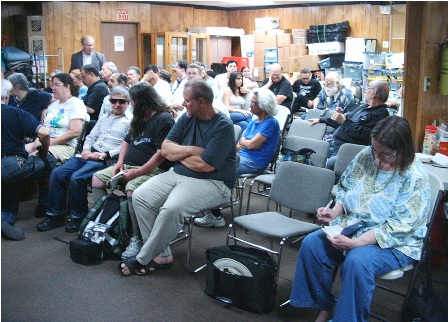 6 thoughts on “Last and First Meetings”