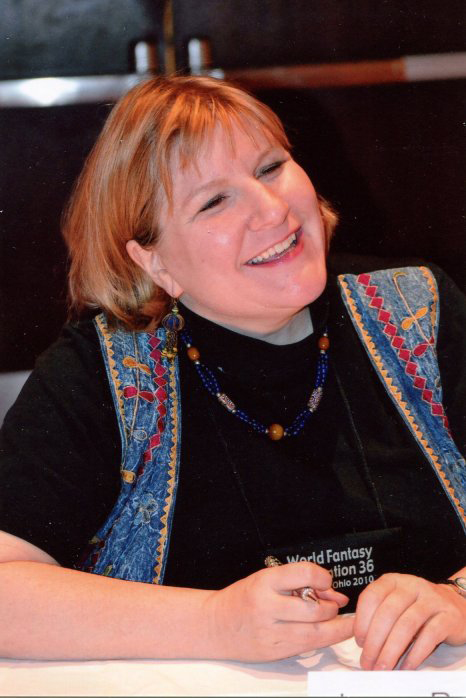 By Carl Slaughter: Laura Resnick broke into writing through the romance genre, switched to sci-fi short fiction, did an urban fantasy trilogy, and then a series of comedy-horror-detective novels.  The first 7 in the series were recently produced as high quality full cast audio.  Now Resnick is offering a humorous take on Lovecraft in Alex Schvartsman’s latest humor anthology.

CARL SLAUGHTER: What was the appeal of writing Lovecraft type horror?

Lovecraft’s fiction seems to be going through another period of revival, where people discover or rediscover it. Cthulhu is a Lovecraft creation which, in addition to being popular with fans, has entered mainstream consciousness (ex. “Cthulhu for President” as an internet meme in 2016). Even people who’ve never heard of Lovecraft, or who’ve heard of him but have never read his work, are aware of Cthulhu these days. Also, Lovecraft’s prose style is tempting to satirize. So when Alex Shvartsman came up with the idea for the anthology, Baen Books was immediately interested, since Cthulhu is commercial and a Lovecraft humor anthology is unusual.

(The Baen Free Radio Hour on January 26 did a podcast interview with some of the contributors — Alex, me, Esther Friesner, Jody Lynn Nye, and Gini Koch.)

Part of the appeal for me was also that it was a good reason to read some Lovecraft, which I had never gotten around to doing. When Alex invited me into The Cackle of Cthulhu, I was completely unfamiliar with Lovecraft’s work (apart from the Cthulhu memes)—a fact I did not share with Alex until we did a podcast interview to promote the anthology’s release!

CS: Describe the research you did into Lovecraft and what did you discover along the way?

LAURA RESNICK: I normally turn down any invitation to write a story inspired by works that I don’t know (ex. a series of novels I haven’t read, or a TV series I haven’t watched, etc.), since I can’t spare the time to dive into that much material for a random short story. But one thing I did know about Lovecraft was that he focused on short fiction, so I could get a good feel for his writing and themes, and particularly for the “Cthulhu mythos,” in just a couple of evenings.

So I read The Call of Cthulhu, At the Mountains of Madness, The Dunwich Horror, and a few others. The story I liked best happens to have nothing to do with Cthulhu; in “Imprisoned With the Pharaohs,” the great Harry Houdini gets abducted while visiting Egypt and has to escape from mysterious ancient underground caverns where Strange Things Happen.

I found Lovecraft’s stories very imaginative and colorful and pretty creepy. It’s easy to see why his work influenced people. The language is rich and interesting, but it’s also melodramatic; as someone else said, it often seems like a thesaurus vomited on the page. His writing also evinces fastidiousness (or sometimes revulsion) about anyone who isn’t a white Anglo-Saxon protestant. 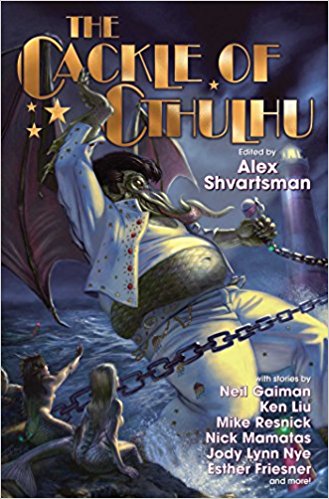 LAURA RESNICK: Well, the assignment was to write a funny Lovecraftian story, and reading the stories had got me thinking in pulp fiction mode. I am a fan of noir crime story motifs and hard-boiled detective tropes (or, okay, clichés). So I reimagined Cthulhu as a traditional private eye, writhing tentacles and all. In my story, “Cthulhu, P.I.,” the cruise ship industry has discovered R’lyeh and corporate culture has taken over. Cthulhu, who got terrible legal advice, signed such a bad contract with a marketing company that he can’t be seen anywhere near R’lyeh without violating the licensing rights for his own image. So he has relocated to Innsmouth and reinvented himself as a private detective. The story begins when a long-legged blonde walks in the door, needing his help to deal with a blackmailer, but things aren’t quite what they seem… Also, there are some Airplane-style jokes.

CS: You’ve conquered several genres.  How do you go from inexperienced to master in such a short time?

LAURA RESNICK: I would say I’ve “worked in” several genres, not “conquered” them. And there hasn’t been anything “short” about the time!

I broke into the business very young, writing “category” or “series” romance novels for Silhouette Books, a division of Harlequin. Back then, Silhouette was a good place to start a writing career. My editors there worked closely with me and taught me a lot, and Silhouette in those days was buying books as fast as their authors could write them. You learn by doing, and I learned a lot by delivering a dozen books in 5 years (as well as by writing a lot of proposals during those years that got rejected).

A few years into my career, I also started writing sf/f short fiction, and that was a case of learn-by-doing, too. I wrote stories for about half a dozen anthologies per year back then (when the late great anthology packager Martin H. Greenberg was at his peak), and even though some of my early efforts weren’t that good, you’re bound to get better if you’re delivering a short story every couple of months for 3-4 years.

When I started writing book-length sf/f, I wrote a number of book proposals I couldn’t sell, before I finally came up with a viable project (on my third or fourth complete overhaul of the idea). And then after I sold it, it took me about a year to write the first book, In Legend Born, in that trilogy (and longer to write the next two books).

It also took, overall, more than ten years to get my urban fantasy series, the Esther Diamond novels, from proposal to publication. These days, I’m contracted through the 10th Esther Diamond novel, so it has worked out well; but it was a long road to get here—a road that was cluttered with agents who told me the project wasn’t marketable and wouldn’t sell (which is just one example, among many, of why I stopped working with literary agents).

At any rate, anyone who writes as much as I’ve been writing ever since the early days of my career has very little excuse not to keep improving at it.

CS: Any other genres in your future?

LAURA RESNICK: I have learned to avoid predictions, since nothing ever goes the way I expect! That said, I really enjoy mysteries and romantic suspense, so I can certainly see myself trying something in that vein eventually.

CS: Your Esther Diamond series is part horror, part fantasy, part detective, part romance.  How do you juggle all those genres in one story?

LAURA RESNICK: Artist Dan Dos Santos, who does the extraordinary covers for the Esther Diamond books, once said to me that the challenge of creating those images is coming up with the right balance of menace, comedy, and sexiness that characterize the novels.

And the word he chose—balance—is also what I strive for when writing the books, what I have to get right to make the stories work. The books are comedy, and whenever working on the humor aspect, the stakes still need to be compelling. I keep my eye on that ball, so that the comedy doesn’t descend into aimless schtick. Similarly, when following the plot-driven aspects of the story (usually the “detective” part), I need to make sure I don’t neglect the humor. The balance I look for in Esther’s chaotic love life is that she’s not just “hot” for her love interest, her heart is at stake. And when working on the horror/fantasy aspect of the stories, I remember that whatever scary stuff I write has to be able to balance with the comedy aspects of the books. So, for example, murder in an Esther Diamond novel often happens offstage, and it typically happens to characters we never meet, barely see, or really dislike; and it does not happen in these books to children or to characters we love.

CS: Give us the inside story on full cast audio.

LAURA RESNICK: The first seven Esther Diamond novels (which is how many have been published so far) were all adapted last year by Graphic Audio, which company describes its format as “a movie in your mind.”

These are full-cast audio recordings, including sound effects and music. They’re halfway between a traditional audiobook and a radio play. Each character is played by a different actor (and the casting maintains continuity, using the same actors from book to book for the continuing characters in the series). The novel is the basis of the script, but Graphic Audio adapts it to the format. So, for example, instead of the narrator reading, “he whispered” or “she sounded angry,” you hear the actor or actress playing that character whispering the dialogue or sounding angry when speaking. Instead of the narration telling you someone laughed, you hear the laughter. If a scene takes place on the city streets, you hear traffic and footsteps; if there’s action, you hear it happening.

Actress Colleen Delany plays Esther Diamond, who is the protagonist and the first-person narrator of the novels. Delany also directs the productions. I think she’s done a terrific job, and I’ve been delighted with these recordings. They really capture the tone and feel of the stories, and the voices are well cast. There are even some actors whose interpretations I like so much, it’s influenced me to put those characters in upcoming books, in hopes of hearing those actors play them again in the Graphic Audio adaptations.

Here’s a quick 3-minute sample that gives you a taste of the series and what Graphic Audio is doing with it. Enjoy!