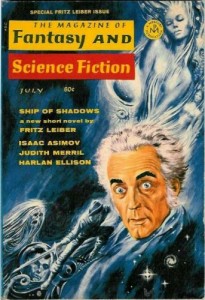 Because he died over 20 years ago a great many fans have heard of him – but never had a chance to actually hear him.

Now the CthulhuWho1’s Blog has remedied that. Fans can satisfy their curiosity by listening to an MP3 of Leiber reading Clark Ashton Smith’s “A Night in Malnéant”, recorded during the 1977 World Fantasy Convention in Los Angeles